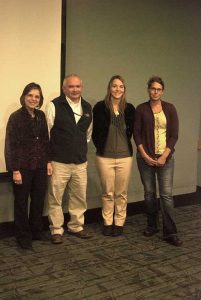 by Michael Wren
ALBANY, NY — On October 22, 2016 people from all walks of life gathered together to learn about and discuss the now legalized cultivation of hemp in New York State. The informational meeting was sponsored by the New York Hemp Industries Association (NYHIA) in order for interested parties to learn more about the New York Hemp Pilot Program. Speakers included Susie Cody, director and founder of NYHIA, New York State Assemblywoman Donna Lupardo, Chris Logue of the Department of Agriculture and Markets, and Heather Darby, an Agronomic and Soils Specialist for the University of Vermont Extension.
President Obama signed the 2014 Farm Bill, including Section 7606, which allows universities and state departments of agriculture to begin cultivating hemp if:
“(1) the industrial hemp is grown or cultivated for purposes of research conducted under an agricultural pilot program or other agricultural or academic research; and
(2) the growing or cultivating of industrial hemp is allowed under the laws of the state in which such institution of higher education or state department of agriculture is located and such research occurs.”
The grower must also be registered and approved by their state. As of now it is legal to grow hemp in over 30 states. This is just the beginning of the United States entering the $600 million hemp industry.
Susie Cody began the meeting by explaining what the goals of the NYHIA are and what industrial hemp cultivation could do for New York State. “My goal is to keep people educated about this opportunity,” says Cody. Events like this, as well as sharing forums and cooperatives, are good ways to get information to like-minded people. Cody’s vision with NYHIA will play a large role in expanding the cultivation and use of industrial hemp.
Assemblywoman Lupardo, who sponsored the legislation, sees the impact that hemp can have on the New York State economy. She believes hemp “has a really high potential to put farmland back to use in New York State and to also be a very lucrative – potentially lucrative manufacturing crop for our state.”
Chris Logue spoke next on what the application process entails and mentioned there are currently 10 permits allowed in New York State, two of which have already been filled. There is no deadline and they are being processed as the applications come in. Logue explained that there is a $500 fee for a three-year license and went over some of the technical terms of how the law was written and what it entails. Growing hemp on your own is difficult right now and Logue says that, “I think developing a relationship with a research department will be good for anybody hoping to grow hemp.”
Attendees were encouraged to ask questions to ensure a better understanding of the law and application process. Questions touched on many issues faced by the new program and what the ramifications on the industry might be. One interested individual asked whether New York plans on getting its own seed bank to avoid having to purchase seeds from Canada or France. At this time there are no standing plans for a hemp seed bank. Another attendee asked about field size limitations if any, in order to apply for a research growing. As of now there are no size limits or restrictions on how big permitted hemp farms can be. Other questions from those in attendance varied from the use of hemp in making diapers to making hemp infused wines.
Some studies suggest that hemp is used in over 25,000 products spanning nine markets such as agriculture, textiles, recycling, automotive, furniture, food/nutrition/beverages, paper, construction materials and personal care. Hemp is an extremely versatile product and while other countries like France and Canada have dominated the market for years, the United States is now expanding its hemp growing and entering into the market.
Academic and research institutions can apply for the program on the New York State Agriculture and Markets website at www.agriculture.ny.gov/PI/PIHome.html. Applications are being accepted on a rolling basis. For more information about industrial hemp and future events put on by the New York Hemp Industries Association please visit their website at www.newyorkhia.org or find them on Facebook.