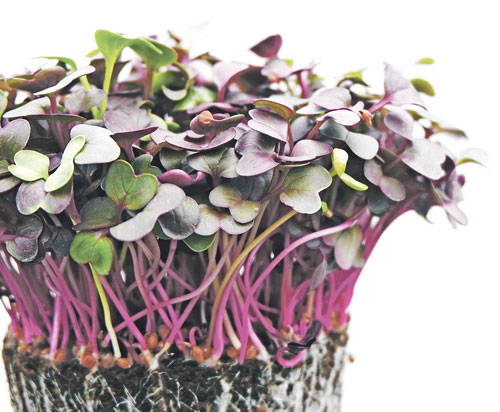 When Zach Ford plans meals, microgreens are on his mind.Ford is the executive chef at the U.S. Hotel Tavern in Hollidaysburg, PA. He has spent 15 years in the culinary field and his focus is using farm-fresh products from artisan producers.

“Microgreens are immature vegetable greens,” said Ford. “I use them in plate presentation and to coax more flavor from a dish. They help build complexity.” He added that he’ll often use micro celery instead of regular celery for a sharper flavor.

When it comes to selecting microgreens from growers, Ford’s first requirement is quality. “I also like to have a lot of options,” he said. “Availability is also a big concern. I look for at least two shipments a week; early in the week and toward the weekend. Price is a concern but it depends on the market.” He also prefers to work with growers who can provide microgreens consistently.

Ford changes his menu every three months for a total of four menu cycles throughout the year. The menu includes both upscale items and comfort food. Ford offers specials, which is an opportunity for growers to discuss new and different microgreen options. “I generally use local ingredients for about nine months of the year,” he said. “From February on, I’m using local products. When I write a menu, I consider seasonality. In winter, I’ll use a lot more cabbage microgreens. I also go along with food trends.”

The price of microgreens is an important aspect of how Ford decides what to purchase. “I expect to pay between $7 and $15 per ounce,” he said. “That creates a 10-cent cost on a dish.”

Ford also works with direct-sales specialty growers who grow a wider variety of microgreens. If Ford knows a particular farm grows what he wants, he’ll work directly with them to obtain what he needs. “The quality is higher because that’s all they grow,” he said, adding that cost is usually higher. “In most cases, I receive an email list of what’s available, then choose what I want. It’s dropped off at the restaurant or I pick it up at the farm.” Specialty growers usually grow more varieties than are available than at farmers market – usually 15 to 20 different microgreens at a time. While the cost of microgreens varies depending on seed cost and other factors, Ford has found that specialty growers deliver the best quality and freshness.

While Ford can opt to purchase microgreens through food service companies, the cost is usually higher. “The variety is endless,” he said, adding that he can choose from several hundred microgreens. “But the cost is almost triple, and I don’t know what kind of quality I’m getting until it actually shows up.” Ford said he has more concern about food safety with microgreens obtained from food service companies simply because they’re dealing with produce on such a large scale. 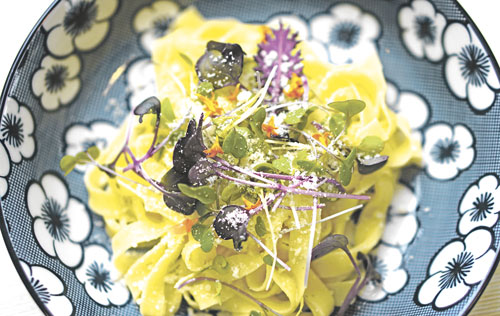 Ford takes advantage of the wide variety of microgreens available to create unique plates. “I like using a rainbow mix as a basis, and use them in a lot of plate garnishes,” he said. “I usually include four or five microgreens with a rainbow of colors. It’s often bull’s blood or amaranth microgreens, and I also use rainbow Swiss chard. I like radish for spice and micro watercress or micro arugula on plates for appearance, and they provide a versatile flavor profile that works in a lot of dishes.”

Some of the microgreens Ford frequently selects are based on appearance. “I like pea tendrils and pea shoots,” he said, adding that he often pairs peas with roasted carrots. “Appearance is the main reason, and they have a subtle, sweet flavor. They’re cost-effective and one of the most affordable microgreens to start with, and availability is good.”

The spicy, peppery flavor profile of micro arugula lends itself to a variety of options. “I pair it with roasted beet carpaccio with goat cheese,” he said. “Instead of using regular arugula, I use micro arugula for a sharper pop in flavor. Micro basil is also a popular microgreen. I like the sweet and savory profile.” Ford added that while micro basil costs more, it’s readily available and useful throughout summer, along with heirloom tomatoes, and as a cocktail garnish.

Popcorn shoots have a subtle, sweet flavor, but Ford usually has to ask growers to grow them. “I like to pair them with shellfish,” he said. “Radish microgreens have a spicy flavor profile, come in a multitude of colors and varieties and usually good availability.” Ford uses radish microgreens primarily in sushi and Asian cuisine.

Growers who want to sell to chefs should understand the restaurant business cycle. Because most restaurants are closed on Mondays, order day is Monday or Tuesday. “The second order day is Wednesday or Thursday,” he said. “A good time to contact the chef or management about availability is between 7 a.m. and 10 a.m. Delivery times are usually from 7 to 10 a.m. and 2 to 4 p.m. – those are the down times at a restaurant.” Ford suggests that growers who want to approach chefs about using fresh microgreens should set up an appointment and be prepared to offer samples.

Ford has several preferences for packaging and handling. “I like to receive microgreens in four to eight ounce clamshells, dry and kept under refrigeration,” he said. “I also like to receive them in the seed tray so I can continually harvest.” For planning purposes, Ford said he likes to receive an email list of available greens and prices from growers early in the week.