Growing off-grid in the Midwest 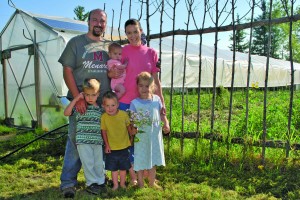 by Emily Enger
Central Minnesota isn’t prime farmland. Most of the state’s tillable acreage is located in the northern and southern regions, with the central area housing its famous lakes and forests. So when Philip Hege, a vegetable grower out of Virginia, was searching for a home in that region, his options were rather limited. He did find a location he liked, but with it came one pretty major problem.
“We’re approximately a quarter mile or so from the nearest power,” explained Hege. “They said it was going to be about $25,000 to bring power here.”
That obviously devalued the property, but Hege realized he could turn the problem to his advantage. “We were able to get the property for cheaper, but I had to come up with an alternate energy solution.”
It was a new challenge for Hege, who had always farmed and lived on typical, electric power. And it was only one of the obstacles. The land had no house or buildings on it and was wooded. There was a small clearing from a former logging camp, where Hege ended up building a house, but more land needed to be cleared to have room to grow vegetables.
Hege and his wife Sarah built the house together, with some help from Sarah’s brothers. They put up a small cabin-size structure and lived there while slowly adding on to the rest of the house. At the time, they had one small child and one on the way.
They chose solar power for energy. “I toyed with wind,” said Hege. “But it doesn’t seem to be as reliable. Solar seems more reliable and has less maintenance. You just put it in and it’s there.”
Currently, Hege has four 230-watt panels on his house and one 120-watt panel running two of his water pumps. “We have a total of over 1,000 watts, but that’s maximum production and perfect conditions. Conservation is your best option with alternative energy. We personally don’t use near as much power as the average household. I’m guessing we use approximately 2 or 2.5 kw a day.”
They use propane for their kitchen stove and hot water during summer. During winter, they heat with wood.
“If we have three or four hours of sunlight a day, we’re fine. But we do have generators, just in case. There are a few times, especially in the fall, where we’ve run short on power, if we have a lot of cloudy days.”
One trick he uses to retain heat in his greenhouses is a cloth ceiling. “Often commercial greenhouses will put two layers of plastic and inflate it with air,” Hege explained. “But I wanted to stay away from any more electrical involvement than I needed.” So instead he takes his floating row covers and drapes them across the length of the high tunnel, so that it resembles a house ceiling. Unlike plastic, the cloth also breathes, preventing the mold that often happens between the layers of double plastic.
Hege grows on about 2.5 acres of land. He also has some low land, which is a wetter, peat-based soil. He can’t grow on the low land, but has been able to use it for a mix. “I’ve put a little bit of peat on some of my sandier soil,” he said. “It’s something I hope to do even more of this fall.”
One crop Hege grew in Virginia that hasn’t grown as well in Minnesota is sweet potatoes. “Out in Virginia we had a lot longer season. Sweet potatoes were a big thing. One year I had about 6-7,000 pound yield. I had a couple of them that were huge, pushing five pounds.” The ones he’s growing today are significantly smaller than that, but Hege thinks he’ll eventually work up to a higher yield. He’s only been growing on this land for two seasons and is still working with the soil. The sweet potato yield will also depend on the weather. “They don’t take frost at all,” he explained. And in Minnesota, early frosts can be a common problem.
After learning so much about solar energy, Hege would do a few things differently. “I’d try to incorporate more passive solar, especially in the house. Focus more on windows being oriented towards the south, stuff like that.”
One heat method some people use is a heat bank — a rock bed that one blows hot air through during the day, which then retains heat for the evening. “If you wanted to spend the money up front,” Hege said. “You could technically design your house in a way that required no heat, even in Minnesota. Theoretically, if you have enough insulation, your body heat should be enough,” he laughed. “But I’m not sure I want to go there.”
The challenges Hege faced may have been enough for some to find a different location, but Hege enjoyed the work. “It depends on your personality and what you’re used to,” he said. “To me, I love it. I love the challenge. I love the planning and dreaming.”
And in central Minnesota, that kind of personality is a good thing to have.