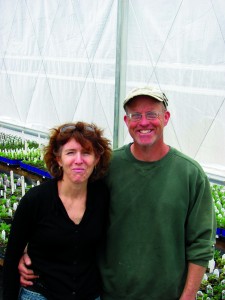 by Karl H. Kazaks
GLEN ALLEN, VA — Finding new markets can be one of the biggest challenges for a small nursery looking to expand its business. But for A Thyme To Plant, a wholesale herb and vegetable operation owned by Stan and Nicole Schermerhorn in central Virginia, businesses having been seeking them out in recent years.
When they were growing only herbs, they got requests for vegetables. An independent nursery asked for four-packs of spring vegetables, so the Schermerhorns added that line to the four-inch pots they were already selling. A gourmet grocery chain — which now numbers 10 outlets — sought out A Thyme To Plant’s line of offerings (and even encouraged them to grow berries this year, too). A wholesale vegetable producer asked the Schermerhorns to grow starts for their spring field production.
Add it all up and this year the Schermerhorns grew as many plants for the spring season as they did all of last year.
What’s their secret? Aside from growing top-quality, good-looking plants, the Schermerhorns become certified organic (through QCS) in 2009.
Prior to that, the Schermerhorns had been using mostly organic techniques, so the changeover (aside from the paperwork requirements) wasn’t too daunting. The biggest change, according to Stan, was switching to a growing medium without a wetting agent.
“We had to relearn watering,” he said.
This year A Thyme To Plant switched to a new growing mix which contains a slow-release fertilizer. Without the slow-release fertilizer added, “it was taking so much time to fertilize,” Stan said. They still fertilize — particularly heavy feeders — but it’s not as time-consuming as it was.
The Schermerhorns have been able to boost their production every year for 10 years running — this year they will grow at least 500,000 plants — because they continue to develop efficiencies like adding slow-release fertilizer. For example, four years ago they went to pre-ordering only. Last year they sold essentially all of their plants in advance, and this season they pre-sold their entire production.
Moving to pre-orders, said Nicole, has been “like a dream.” It has allowed them to turn some greenhouses three or four times, because they know far in advance when plants will be shipped.
Other efficiencies have been dollar savers rather than time and space savers. For example, there was the move to a hydronic table heating system, which allows the Schermerhorns to heat just where necessary for germination rather than the whole greenhouse.
There are also the “porches” (or vestibules) that Stan built at the entrance to the nursery’s hoop and Gothic arch greenhouses to provide a way for better bug control. The porches also serve as a good spot for hardening off plants.
The growth of their business has also been possible thanks to constant expansion of their physical plant. In 10 years of operation, they have built about seven greenhouses.
Certain details of the Schermerhorns’ relationship seem to make clear that their partnership is meant to be. They met while on vacation — Stan from Virginia, Nicole from near Sydney, Australia — in New Orleans. They married and Nicole moved to the U.S. Today they have two children, Luke (10) and Ellen (6).
While working full-time jobs (Stan as a carpenter, Nicole with Philip Morris) they started a mostly weekend retail lavender business called Lavender Fields Herb Farm. Then A Thyme To Plant’s original owners, Bill and Marianne Ritchie, decided to retire. The Schermerhorns bought the business. And then of course there are all the businesses which have come knocking on their door, asking them to sell them plants.
When the Schermerhorns bought out the Ritchies 10 years ago, A Thyme To Plant was selling about 100,000 plants a year, all herbs, mainly in the Richmond area. Today the company sells throughout central Virginia as well as to Virginia Beach and the important Northern Virginia/D.C./suburban Maryland market. Its core customers are independent garden centers and gourmet groceries.
Vegetable production has been fast expanding. When you account for fall production, A Thyme To Plant’s annual vegetable production now about equals its herb production.
At peak production, A Thyme To Plant will employ about 15 people. Lavender Fields Herb Farm, today reborn as a retail garden center — and run by Nicole’s nephew Shaun Mercer — has about half a dozen employees at peak.
Lavender Fields Herb Farm has a very active workshop and demonstration schedule with something happening every weekend.
“We really focus on classes,” said Mercer. “Growing, cooking, making wreaths and garlands — connecting people with the end result of what they’ve grown and not just the initial idea of planting.” Every May they hold an open house with multiple demonstrations — they invite a beekeeper, a candlemaker, a soapmaker — all of whose wares are sold in the retail store.
The retail store offers lavender ice cream and lavender lemonade, and this year is teaming up with other area local foods producers to provide a retail outlet for them as well. That includes a creamery, a berry producer, and a meat producer.
Lavender Fields Herb Farm, reports Mercer, is a popular destination for groups, including garden clubs and women’s groups. Sometimes the groups stay for lunch, either at an outdoor facility that can accommodate 100 people or at an indoor area which seats up to 21.
Every year in the fall the Schermerhorns hit the road to visit their customers, who give feedback on what their customers want to buy. That’s how they decided which gourmet lettuce mixes to grow and to increase their heirloom tomato production. They will even be growing some one-gallon tomatoes this year.
When asked whether it was a challenge to jump into the nursery business 10 years ago with a newborn child and little related experience, Nicole admitted that it was, and added that keeping up with the growing business “still is.”
The way the Schermerhorns keep incorporating efficiencies — and the way new markets keep finding their way to them — leaves little doubt that any challenges they currently face are ones they’re destined to meet.