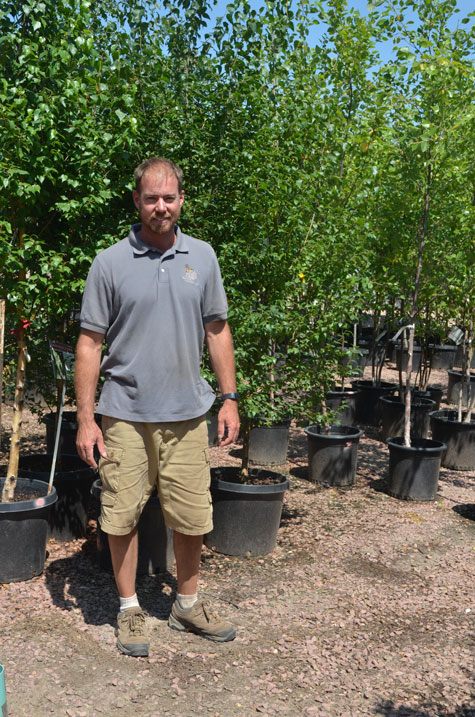 Daemon Coughlin strives to offer the appropriate stock for the nursery’s Zone 4 location, and said some of the popular trees people successfully grow include hardy redbuds, maples and oaks.
Photos by Sally Colby

Although Daemon Coughlin grew up in the nursery business his parents started 40 years ago, he didn’t necessarily see that as his future. But after earning a degree in landscape design from South Dakota State University, he’s back.

“When my parents purchased the property in 1979, it included a house, acreage and a few outbuildings,” said Coughlin. “My dad opened a landscaping business there but they weren’t thinking about having a retail store at the time.” The business slowly evolved with the introduction of a few annuals, trees and shrubs sold out of a 20’ x 30’ greenhouse. Today, the attractively landscaped grounds draw customers year-round to Oak Ridge Nursery and Landscaping in Brandon, SD.

Coughlin said that while some of Oak Ridge’s inventory remains similar from year to year, he’s always open to fulfilling customer requests. “People are always looking for something new,” he said. “People want plants and trees they don’t have to do much with – species that will hold leaves for as long as possible.”

Contract landscaping is a major aspect of the business, and the nursery is known for creating unique outdoor living environments and functional landscapes. For those who want to create their own landscape, Oak Ridge inventory includes a selection of trees, shrubs and plants. “Homeowners who visit are looking for something new and unique,” said Coughlin. “Lots are smaller, but houses are getting bigger, so people want smaller but full-size material. They don’t want a 50’ to 60’ shade tree in their yard.” Landscape installations for both homeowners and businesses begin in early April, and the Oak Ridge crew continues working until snow arrives.

Part of this trend includes mid-story species, both trees and shrubs, and Coughlin has seen this size become more popular. “Everyone wants something that’s 2’ x 3’, and they don’t want it to get any bigger,” he said. “They want to put it where they want it and expect it to live.” Coughlin added that standard favorites such as spirea, barberry and weigela aren’t sought after as much because they’re common, so he introduces customers to less common varieties of these species.

Coughlin strives to offer the appropriate stock for the nursery’s Zone 4 location, and said some of the popular trees people successfully grow include hardy redbuds, maples and oaks. An ongoing challenge, and one Coughlin enjoys, is helping customers select trees and shrubs that will thrive in the climate zone, then teaching those customers what they need to know to help plantings survive.

With a variety of unique selections, Oak Ridge staff ensures customers have options different from big box stores. “We don’t have run-of-the-mill gold spirea,” said Coughlin. “We want to teach people that spirea isn’t just one plant – there are a lot that are different.”

While some customers arrive at Oak Ridge with particular plants in mind, others are unsure of what they want and are happy to have Oak Ridge experts advise them. “Some just want it to look nice when it’s done,” said Coughlin. “Other people have particular plants they want to use and some they know they don’t like. Perennials are always a good choice because they’re easy to maintain and flower reliably.” 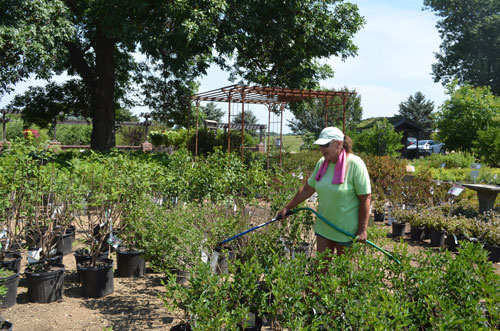 In addition to popular favorites, Daemon Coughlin stocks a selection of native and prairie species. “Sometimes it’s hard to find suppliers of species specifically for prairie area,” he said.

Helping customers understand growing conditions is the key to success with purchases. Coughlin said the challenge for most homeowners in the area is a wide range of weather conditions and heavy clay soil. “Homeowners want a lush, green lawn that has to be mowed frequently, and that requires a sprinkler system,” he said, adding that people love having sprinkler systems. “But the same sprinkler will overwater trees and shrubs. We have to replace far more plants and trees because of overwatering, not drying out. Generally, if something dries out, they can give it a shot of water and it will perk up again. If people overwater with a sprinkler system, by the time they start to see the effects of overwatering, it’s too late.”

In addition to popular favorites, Coughlin stocks a selection of native and prairie species. “Sometimes it’s hard to find suppliers of species specifically for prairie area,” he said. “People think they want native plants and want big, full flowers, but native species don’t do that. The plant is native here, so it’s accustomed to drought and hard winters, and it isn’t going to be full and lush and flower like a simple Stella daylily.”

Spring at Oak Ridge begins with bedding plants, many of which are displayed in attractive plantings throughout the grounds. Coughlin said competing with hardware and grocery stores can be tough, so he tries to grow plants customers can’t get anywhere else. One customer favorite is hanging baskets, offered in early May if the weather is suitable and later if winter lingers.

“We start our own baskets using plugs, and we’re doing more baskets every year,” said Coughlin. “We put together several hundred 14” baskets, and by Mother’s Day we should be past any frost, so it’s safe to put them out.”

Coughlin said succulents continue to be popular. He has noticed younger people are especially interested in them, perhaps because succulents don’t require a lot of time.

Growing space at Oak Ridge includes a 180’ x 40’ main greenhouse and three 40’ x 100’ hoop houses. The main greenhouse is heated year-round, while the hoop houses are used mainly for perennials and annuals in spring. B&Bs stay outside all winter. Shrubs and smaller potted trees are tastefully displayed throughout the grounds, and an idea wall provides inspiration for customers.

Oak Ridge hosts several events throughout the year, starting in spring with an open house and Mother’s Day. While there are fewer customers through the summer, a pumpkin festival the first weekend in October brings them back. Although he doesn’t sell as many pumpkins as in the past, Coughlin said it’s a good way to bring in new customers, many of whom return for classes such as the sell-out session in creating decorative porch pots at Christmas. “I focus more on plant material sales now,” he said. “We don’t go through as many pumpkins as we did in the past, but we sell a lot more trees and shrubs.”