Grown Your Own Pest Control: Natural Habitat As The Basis For Biocontrol 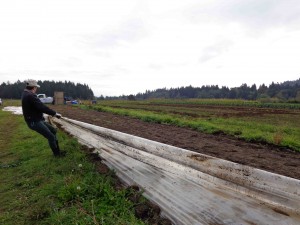 by Karl H. Kazaks
NRCS recently hosted a webinar about encouraging beneficial insects for pest control. Over 300 people from around the country logged on to hear Eric Lee-Mäder speak about biocontrol.
Lee-Mäder is the Pollinator Conservation Program Co-Director at The Xerces Society, which is dedicated to invertebrate conservation (and named after an extinct blue butterfly). As part of its mission, Xerces participates in research about pollinators and beneficial insects. Consequently, the organization has a wealth of data and insights which are applicable to and useful for productive farm environments.
NRCS has partnered with Xerces in a variety of manners since 2008. Soon, the two organizations will release a technical guide about integrating biocontrol into conservation practices.
The key to developing a significant beneficial insect population, Lee-Mäder said, is to manage farm conditions to encourage habitat for beneficial insects. “The amount of natural habitat directly influences beneficial insect abundance.”
Such habitat provides alternative food sources for beneficial insects. Some insects feed only on pollen and nectar during one life stage, before transforming into predatory insects. Other insects can use both types of feed simultaneously, but need nectar and pollen as an option when pest insects aren’t available.
Habitat also provides shelter for insects, including a place to overwinter and lay eggs.
There are many places beneficial insect habitat can be developed on a farm – in hedgerows and windbreaks, in field borders, even in cover crops and pasture plantings. You can create such habitat, Lee-Mäder said, “at just about any scale and any location.”
Beneficial insects tend to prefer a diversity of habitat, in contrasts to pests, which thrive in monocultures.
The general rule of thumb, Lee-Mäder said, is if 20% of more of the farm is diverse habitat, “pest control by beneficial insects is observable.”
The estimated value of pest control by wild beneficial insects is as much as $12 billion in the US and $100 billon worldwide. It “happens at such a small-scale we don’t readily observe it, even though it happens around us all the time,” Lee-Mäder said.
This is all possible because insects eat other insects. “Most predators are generalists,” Lee-Mäder said. They’ll attack anything smaller than them – including other beneficial insects.
There are two groups of common beneficial insect: insect predators, who feed on other insects, and insect parasitoids, who lay eggs on, within, or near prey insects. There are also non-insect beneficial anthropods such as spiders and nematodes.
Examples of insect predators include:

Parasitoids are small but highly effective. Examples include parasitoid wasps, “perhaps the most abundant beneficial insects on earth,” and tachinid flies.
The first step in enhancing habitat for beneficial insect on your farm is to look at an aerial photo or farm map and work from “the outside in,” Lee-Mäder said. Are there opportunities on the farm boundaries to create habitat by adding hedgerows or windbreaks?
What about field borders? Can you add annual or perennial vegetation which would serve as habitat for biocontrol bugs?
Moving further inward, could you add diversity and habitat through cover crops, orchard ground cover, or pasture plantings which would support both livestock and beneficial insects?
Together with UC-Berkeley, Xerces performed a six-year study to determine if adding natural habitat would provide more biocontrol. After planting hedgerows of native vegetation on a farm, they found that pest suppression did occur, compared to a control field, thanks to beneficial wasps parasitizing sting bug eggs.
The same study also measured whether hedgerows were a reservoir for pest insect. In almost all cases, there were fewer pests in hedgerows than in weedy field borders.
As for the economics of such plantings, the study found that, thanks to the value of increased pollination as well as pest control, hedgerows pays for themselves in 10 years. That time frame could be cut in half if NRCS assistance is used to implement hedgerows as a conservation strategy.
Lee-Mäder stressed that there is enough variety of habitat to provide locally appropriate material for hedgerows or field borders in any part of the country. For example, there is preliminary evidence that mountain mint and spotted bee balm can (by providing nectar) serve as habitat for parasitical wasps which prey on brown marmorated stinkbugs.
Within cropland itself, Lee-Mäder suggested, consider planting flowering cover crops to provide habitat for beneficial insects. Research is underway to test the benefits of growing buckwheat near soybeans, and organic tobacco growers also like to use wildflower plantings to encourage beneficial insects.
Some farmers have built beetle banks on their farms, raised beds with perennial bunch grasses, which have helped “provide meaningful pest suppression in adjacent fields.” In vegetable production, you can use an interrow cover crop (such as crimson clover) as an insectary.
When preparing to establish habitat for beneficial insects, Lee-Mäder said, “site preparation is key.” That means removing weeds in advance.
Solarization is an effective strategy for preparing for mass plantings, Lee-Mäder said. This is done by covering the area to be planted with a sheet of UV-stabilized high tunnel plastic (burying the edges of the plastic). Through the warm growing months, the heat will build up in the soil and kill the weed population (including rhizomatous weeds).
Pull the plastic off “as soon as peak summer temperatures have subsided,” before rhizomatous weeds creep back in, and spread your seed.
“The process has proven to be incredibly, incredibly successful,” Lee-Mäder said.
For more information on this practice – as well as biocontrol in general – check with your local extension agent or refer to The Xerces Society’s recently published book, Farming with Native Beneficial Insects.