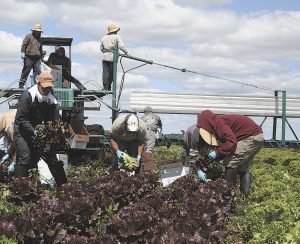 by Jeremy C. Nagel, Michigan Farm Bureau
LANSING, MI — In case the H-2A visa program wasn’t already clumsy enough in providing foreign workers for American farms, administrative delays in the agencies that administer the program are wreaking havoc with crop production schedules. Unable to meet their own deadlines, delays at the U.S. Department of Labor (DOL) and U.S. Citizenship and Immigration Services (USCIS) are threatening some farmers’ abilities to even get their crops in the ground this spring, much less see them harvested months from now. In hopes of drawing more attention to the issue, the American Farm Bureau Federation (AFBF) recently coordinated a media teleconference featuring state agriculture department administrators and farmers from across the country that are struggling for more timely feedback from federal labor agencies.
Among those farmers was Jen Costanza of A&B Costanza Farms, a vegetable operation she and her husband Brett operate near Sodus in Berrien County. “We’re still in the very early part of our season. We’re basically to a point now where we need people here to get our stuff planted,” Costanza said. “We have a very short time frame. We’re not losing product in the fields yet, but we also aren’t getting anything planted.” AFBF President Zippy Duvall opened the forum with a general description of the mounting crisis that’s causing headaches across the country. DOL and USCIS are seeing delays processing H-2A applications; backlogs of up to 30 days are resulting in workers not getting to farms in time to do the work they’ve been contracted to do. “The DOL is supposed to be responding to our farmers before the crews are needed and they are not doing that in a lot of cases,” Duvall said. “Crops are not going to wait for the labor to get there. Crops will continue to mature and rot in the field if we don’t get something done and done quickly.”
The feds’ own regulations require H-2A application approval at least 30 days prior to when the farmer needs his/her workers. “That deadline is routinely being missed,” Duvall said, adding that state Farm Bureaus across the country are hearing from members missing their windows of opportunity to plant, tend and harvest perishable crops.
Costanza’s step-by-step recitation of her farm’s H-2A woes made for painful listening, with DOL questioning why their worker application this year was different than the year prior. “Last year we did July 1, but this year realized we weren’t going to be getting our domestic workers in time for our early-season cukes, so we started a new contract in April and they were questioning why,” Costanza explained. Subsequent notices-received after the date they’d anticipated their workers arriving-requested additional evidence but didn’t explain exactly what evidence was lacking. “They emailed us saying there was going to be some request for evidence, but they couldn’t tell us what they were going to request — there was no information in regards to that,” Costanza said. “They said we’d have to wait for the snail mail to go through. “We were already past our start date [when] we finally received the notice saying what they requested from us. We overnighted our answer. They told us in pretty much these exact words that they don’t have the staffing available to have someone pull our file to find out what it is they were requesting from us so we could get stuff going in a more timely manner. They said they weren’t capable of doing things electronically. “Our start of contract was April 11. We still don’t have our approval from USCIS so I still have no idea when our people are going to get here,” Costanza said. “We have workers who are trying to contact us and say, ‘Hey what’s going on? We thought we were coming in April,’ but we’re basically at a standstill right now.”
Also taking part in the teleconference was Jamie Clover Adams, director of Michigan’s Department of Agriculture & Rural Development. “Something needs to be done to get the entities that work on H-2A to coordinate and work together,” Clover Adams said. “Growers have talked about getting snail mail from California and it takes seven to eight days to get there and that’s time they waste and that’s time the agencies don’t have either.
“Americans are eating more healthy foods, and here in Michigan we grow a lot of fruits and vegetables,” she said, but growers aren’t putting crops in the fields because “they don’t know whether or not they can get the labor to harvest them.” “We’re looking at what might be a crisis,” Duvall concluded. “H-2A needs to be brought into the 21st century. We could see farm families suffer terribly and see consumers paying higher prices for their products. “The environment to have a productive discussion around farm labor and immigration reform has not presented itself this year. We were hoping for the opportunity to speak to that. “We’re ready to have that conversation when Congress is.”
To view this and other H-2A related articles online, visit: michfb.com and search H-2A.
Source: Michigan Farm Bureau, AgriNotes&News