Half an acre of produce and a taco stand 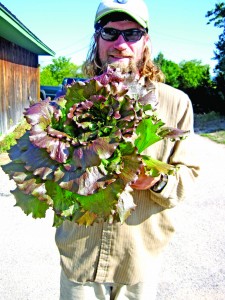 by Kelly Gates
When Michael and Nichole McHugh began searching for side business opportunities to supplement their teaching jobs, they both wanted to get into the growing business. They had worked for greenhouse companies in the past and knew that they would enjoy being part of the industry. But they only wanted to proceed if they could start a company without having to manage a staff.

Because hiring employees right away wasn’t an option, the business had to be easy for the couple to start and manage themselves. According to Michael, this eliminated most standard setups.
“We looked into greenhouses and traditional outdoor produce growing but those would have been too much to undertake for just the two of us,” said McHugh. “We were interested in growing outside but usually that requires soil amendment, rototilling and a bunch of the other things that have to be done to prep for a new growing season, not to mention the equipment we would need to make that happen. So we looked into hydroponics, which doesn’t require any of those things.”
However, with only a quarter of an acre as their template, the duo wasn’t sure if they could create a growing operation that would produce the amount of produce they desired.
To make efficient use of the space, they opted for a popular vertical hydroponic technology that enables them to grow 20,000 plants on the .25-acre plot by stacking the containers five high, resulting in 20 plants per sq. ft.
“Most people think that you can only grow hydroponic lettuce or a few types of herbs inside of a greenhouse, but we grow everything from strawberries, tomatoes and peppers to cucumbers and eggplants and we grow them outdoors,”
noted McHugh. “If you wanted, you could even grow blueberry bushes or orange trees using hydroponics.”
Because there is no soil used in hydroponics, the potential for soil-born pathogens is virtually eliminated. Instead, the roots of each plant — whether it is tomato, cucumber or strawberry — are placed into a mixture of vermiculite and perlite.
These substances help spread the root system and hold it into place so the nutrient solution that is applied through a drip irrigation system can be easily absorbed by as much root surface as possible, explained McHugh.
“Our goal was to keep planting and maintenance as simple as possible,” he said. “With hydroponics, our biggest concern is making sure we don’t forget to turn on the watering/nutrient solution system frequently enough to keep the plants healthy.”
The Cedar, Michigan-based company, Cedar Sol Hydro Farm, has now be in operation for eight years. The McHughs chose to make it a PYO business so customers could help with harvesting, keeping labor at a minimum.
Nearly half their plants are strawberries, as most people come to pick those throughout the early summer months. People can also pick any of the fruits and vegetables growing on the site too. Or, they can purchase pre-picked produce.
“We have a cooler in our onsite market that we keep well stocked with produce for those who don’t want to pick their own,” said McHugh. “We also have a taco stand that has surprisingly become one of our biggest assets over the past few years. It all started one fourth of July when we decided to sell the amazing tacos that one of our employees, Carlos, used to make.”
Carlos had worked for Cedar Sol Hydro Farm for several years. And when the McHughs tasted his infamous tacos, they chose to open a taco stand for the mid-summer holiday as a one-time thing. But the stand was highly successful, the owners decided to keep it up and running ever since.
According to Michael, the mini eatery has become an integral part of their business.
“The taco stand is one of our biggest money makers,” he told Country Folks Grower. “We use a lot of our produce in the tacos, so that makes good use of any vegetables that PYO customers don’t pick.”
The stand has fared so well, the McHoughs plan to reformat their crop sets in the future to accommodate the ever-expanding need for taco ingredients. Peppers and tomatoes are just two of the items that they will grow more of in upcoming years.
A greenhouse or two might even be constructed to allow these and other produce plants to be started earlier.
“Currently, we start most of the plants in the living room of our house, so we definitely need a greenhouse for that purpose anyway,” said McHough. “But we want to start some of the taco ingredients even earlier than we do now so we can harvest them sooner, using even more of our own produce for the tacos early in the season.”
Additions like these will undoubtedly make Cedar Sol Hydro Farm a more efficient operation. The farm has also started selling to a distributor who supplies restaurants, further expanding its market base and contributing to the overall success of the company.