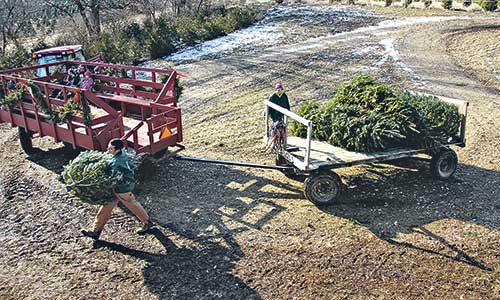 by Laura Rodley
The smell of Christmas is in the air all year long at Hann’s Christmas Farm with 48,000 Christmas trees in the ground in all stages of growth.
“I make eighty percent of my income in seven days — the three days after Thanksgiving and the next two weekends. Then I have to be a Master Budgeter,” said Greg Hann, who bought the Oregon, WI operation in 2001. Year round, he is the sole employee. But during busy season, he is helped in the evenings and weekends by his wife Therese, a full-time teacher, and 75 to 85 seasonal employees.
The farm was started by his parents, Al and Myra Hann. They bought two acres in 1968 and chose to keep it as cropland. They planted it with Christmas trees, which wasn’t a typical agricultural crop at the time. Eight years later, after the trees had tall grown enough for them to sell, they bought another seven acres. “At first, they just sold them off the road. He sold what he had and closed when he was cut out,” said Greg Hann. Then in 1984, 40 acres came up for sale behind them and they began their agri-entertainment business full-time.
His parents were too busy to dress up as Santa and Mrs. Claus, who made their appearance each weekend to meet customers, so friends and neighbors were delighted to dress up as the iconic duo. Greg has kept this tradition intact, but now staff dress up as Santa and Mrs. Claus.
Even their website is imbued with Christmas fever. On their special kids’ page, children can write letters to Santa which get answered right away.
They offer hot cider or popcorn, a Holiday Haystack for children to climb on, hay-wagon rides drawn by a tractor, a giant wreath for families to cluster around for photos and onsite artists. They also make wreaths. Five thousand of the wreaths are sold to local non-profits, including Boy Scouts, sports youth groups and church groups for fundraising. “We sell to all these types of groups — any fundraiser. Wreaths are a good moneymaker,” said Greg Hann.
For their trees, they sell Blue Spruce, Scotch Pine, Balsam, Fraser and Canaan firs. Greg Hann said, “Canaan is a natural cross from Balsam and Fraser, from the Canaan Valley in the East; it’s up and coming.”
He normally plants 5,000 to 6,000 two-year-old seedlings each year. Each tree is seven to 10 years old before being ready for customers at Christmas.
What fertilizers does he use? “We use nitrogen, predominantly, on Fraser Firs. They like the nitrogen. What we lack is rainfall. For us to get them to grow nicely in smaller rainfall is to use more fertilizer.”
The Fraser Firs like a soil pH of 5.5 to 6. “Farmers try to put it the other way — put down lime to raise the pH — but we put down sulfur to lower the pH.” The amount of rainfall depends on the year “but on average, the Carolinas get double than what we get,” he said. The Fraser Firs are originally a mountain tree, native to North and South Carolina, that has substantially more rainfall.
For weed control, he band sprays the rows between trees to leave a 40-inch grass path so the ground doesn’t erode. He notes that the cut grass provides nitrogen plus helps keeps ladybugs present so they eat aphids and he can use less spray. “This year was a record rainfall and I needed to keep weeds down. I sprayed every three weeks. It’s a non-stop battle.”
Besides the small tank sprayers for band spraying, he has a compact utility tractor to pull the planter, an 18-horsepower tractor to mow between rows and a small, narrow Kubota tractor.
Hann is a member of the American Christmas Tree Growers Association, Wisconsin Christmas Tree Growers Association, Michigan Christmas Tree Growers Association and National Christmas Tree Growers Association.
He said, “I enjoy the freedom owning my own business, being outside, growing something that people put inside the center of their house at Christmas that I’ve taken years to grow. That means a lot to me. It’s a nice balance between having customers and then having no customers. We don’t get crabby customers, only happy customers.”
Last season, they donated 50 Christmas trees to Trees for Troops. Since 2005, Trees for Troops has provided over 176,000 farm raised Christmas trees to armed forces members and their families. “FedEx is partnered with them. They drop off a trailer. We load our trees on it and they take them to specific bases,” said Hann.
“It’s a great thing. People don’t realize how much troop families have to move around from base to base. We always have the military stand up and we clap for them, but what about the families; the families have to be rewarded too,” he said. “It’s paying them back and paying it forward, aware that they’re gone during the holidays.”
For more information, access www.hannschristmasfarm.com.