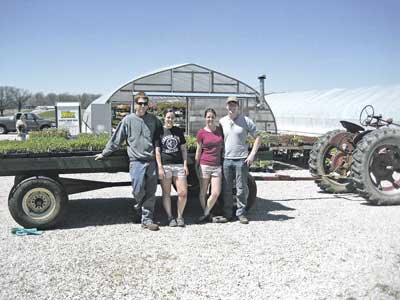 William Harriman started growing produce and selling greenhouse bedding plants when he was in middle school. That was in 1998. Each year, he has expanded and improved his operation. In 2012, he sold his greenhouses to his younger sister, Shelley, so he could concentrate on wholesale produce production. First generation farmers, they now run Harriman Farms together, just north of Spencer, IN.

It was their grandfather, Homer Ristow, who inspired their wish to farm. “He was around when I got started,” said William. Homer advised William to grow tomatoes that produced well. Currently, William sells his wholesale produce to distributors for area stores, farm stands and groceries. Along with selling by the semi-load, Shelley sells direct to customers who visit the farm store.

The farm store was recently renovated and expanded in 2016. Open spring through fall, it features William’s produce along with seasonal fruits and vegetables from local farms and orchards.

William graduated from Purdue University in 2007 with a degree in horticulture production and management. He lives on the farm with his wife, Beth, and their daughter and son.

“I grew up helping out as needed. Our parents have helped out considerably as well,” said Shelley, referring to Steve and Kathleen Harriman. After graduating from Indiana University, Bloomington in 2011, Shelley helped with the harvest season, and in 2012 took over the greenhouses. Last winter she added two greenhouses to the existing two; this brought the total space under cover to just shy of 15,000 square feet.

On Valentine’s Day, Shelley was transplanting flower plugs and rooted cuttings in preparation for the spring season. “The first greenhouse is almost entirely filled with zonal geraniums, pansies, snapdragons and fuchsias. There’s plenty more to come — this week, we’re getting busy planting most of our mixed container pots and baskets, along with 4.5-inch pots of vegetative annuals,” like calibrachoas, petunias and verbenas. “I’ve also started growing mums. That’s been fairly successful. Each year I’ve nearly doubled what I’ve grown over the last.”

“I enjoy working with the large variety of plants I grow and helping my customers find just the right plant for the right spot. Each spring it’s fun to see the same faces come in year after year,” she added.

Starting plants in the greenhouse gives William a jump on the growing season, which begins in March and runs to October. He utilizes 225 acres spread out over a handful of fields. On 125-acres, he rotates corn and soybeans with the remainder planted in produce, including melons, tomatoes, cabbage, pumpkins, winter squash, zucchini, yellow squash, and peppers. “The vegetative annuals along with perennials and bedding plants will fill the second greenhouse, while most of the vegetable starts for my retail customers will be in the third greenhouse. We start William’s vegetable field transplants out in the fourth greenhouse where we have a hot water pipe system on the floor fed by a propane boiler; this higher temperature greatly speeds germination and plant uniformity,”said Shelley.

He keeps ahead of weeds, diseases and insects by using fertilizers and pesticides, as well as cultivating and hand weeding. “I like to use all the tools available. If I have an insect problem, I want to deal with it, keep them under control.” Last season, he encountered and overcame cucumber beetles, and corn ear worms on his sweet corn as well as mite and aphid issues on peppers and tomatoes. Each year brings more opportunity to learn how best to grow great produce.

Like many farms, there are hardly ever enough tractors for the long list of daily tasks. William uses and maintains a small fleet of tractors, including one Farmall H that William and Shelley’s grandpa Homer used on his farm more than 50 years ago. To harvest most of his crops William drives a pair of hydrostatic transmission tractors including an International Hydro 656 and Hydro 86. These tractors smoothly transition between fast and slow speeds as desired, which makes it easier for those hand picking alongside the tractor and harvest wagon. Along with some useful John Deere tractors, these keep the farm moving from planting season through harvest.

During winter, the siblings stay busy catching up with farm maintenance, repairs and periodic improvements. A few years back, William saw the need for a new packing line to wash, sort, grade and pack his produce. He searched available options to buy new or used, but there wasn’t anything that was “just right.” So, he designed and built a new line himself. The new packing line includes a dump tank (the only part retrofitted from an existing line), in-feed belt, washer, grader table with cull shoot, and a two-way conveyor belt with nine packing stations.

His wife Beth works as a kindergarten teacher and helps out on the farm when she can, especially during the summer break. Shelley lives nearby in town with her husband Evan McKalip, a teacher at the local high school, who also joins in the work during planting and harvest season.