Dewey and Sharon Lloy had a plan when they purchased a 55-acre farm in Raymond, Maine: to create a Christmas tree farm and provide a memorable experience for guests. 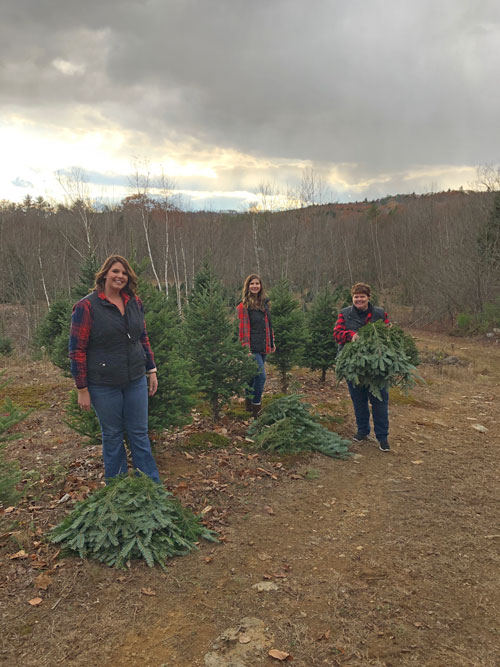 Sharon Lloy (on right) with two of her daughters collect boughs for wreaths.
Photos courtesy of the Lloy Family

After the initial land clearing, the Lloys’ first planting included 550 balsam fir, native to Maine and a favorite for its memorable pine scent. As its name suggests, Balsam Ridge is situated on a rocky ridge with numerous maple trees that would eventually become an integral part of the operation. Although there are benefits to the hilly terrain, the land requires significant preparation prior to planting. “Once a site is set up, it’s easy to replant,” said Dewey, adding that moving rocks is one of the main tasks during site preparation.

Today, Balsam Ridge is home to 11,000 trees, which Dewey said is a manageable number and enough to keep them busy. The uneven terrain includes numerous rock deposits and ridges, but the slopes work well for growing Christmas trees.

With highly acidic soil, Dewey is careful to monitor tree health. “We incorporate lime in the fertilizer program,” he said. “After the first rotation, we might see yellow needles due to micronutrient issues. I can get a handle on that through foliar analysis, then I can balance the micronutrients.” When he first started growing Christmas trees, Dewey relied on soil analysis but said foliar analysis tells him what the tree is doing in response to the soil and allows him to order a custom blended fertilizer to meet nutrient requirements.

As they established a customer base, the Lloys added Fraser fir and Fraser-balsam hybrids. “Some customers ask for that cross specifically,” said Dewey. “I think that market is growing because the species has good needle retention. But we still have customers who want a balsam fir because they want the tree that smells the best.”

Dewey has also planted Korean fir, Veitch (Abies veitchii) and Veitch-balsam hybrids. “The foliage on the Veitch-balsam is wonderful for making wreaths,” he said. “It has a longer needle and soft foliage. They’re very full and probably won’t tolerate heavy ornaments, but I tried them because they grow rapidly.” Dewey plans to continue planting Veitch-balsam trees close to the farm’s main building to make it easy for customers who prefer to select a tree without searching for one.

While Balsam Ridge customers can cut trees at any height, Dewey said most are cut at about eight to nine feet. “Once a tree is that height and it’s a good-looking tree, it’s going to be cut,” he said. “The intent was to provide the experience, so we don’t rope off any sections – folks can roam around.” Dewey plans to save a section of trees and allow them to grow to 12 feet, and some of the fresh-cut trees he brings in are taller than those in the fields.

Some families prefer to purchase a tree that’s already cut, so the Lloys offer a selection of fresh-cut trees. These are displayed upright with clips, which Dewey said is the best way to show them – and the best way to display taller trees.

While some trees are basal pruned at the time of shearing, the lower branches on others are saved for wreaths. “We make a lot of Fraser fir wreaths,” said Dewey. “The Veitch-balsam hybrids are also good for wreaths.” 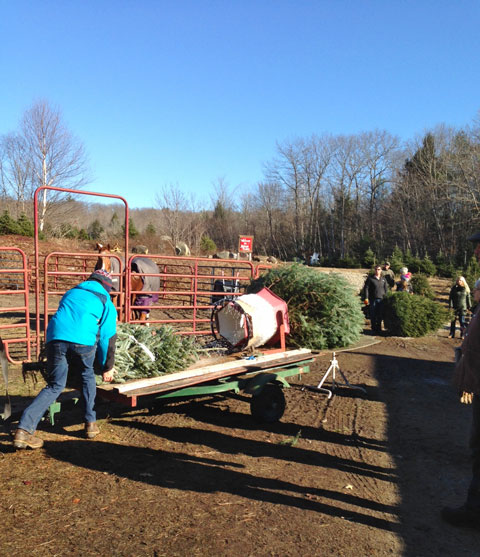 Customers returning from the field wait to have their trees baled.

The Lloys begin accepting mail orders for handcrafted wreaths in early November, and also sell wreaths during the U-cut season. “We make a lot of standard wreaths on a 12-inch ring,” said Dewey. “We also make oversized wreaths, from 18-inch rings to a four-foot ring, which is barn-sized.” Visitors to the farm’s gift shop can select plain wreaths or select custom decorating by Sharon and the Lloys’ daughters.

Sharon handles mail orders, and daughters Hannah, Katelyn and Nicole help throughout the season, from gathering greens to making and decorating wreaths. Dewey credits Sharon with creating an inviting gift shop with a unique selection of gifts. “She’s always in there making it look good,” he said. “When folks come through the door, it has a warm vibe and it’s well put together.”

The U-cut season at Balsam Ridge begins the day after Thanksgiving. The Lloys maintain a spacious parking lot to allow customers to park easily and safely. Dewey said mud is his nemesis in a wet season, but he minimizes messes by adding crushed stone when necessary.

In addition to unique seasonal gifts, the Balsam Ridge gift shop offers a selection of maple products made on the farm. The sugarbush started when Nicole needed a school project. Her grandfather was tapping trees in New Hampshire, so the family had the necessary equipment to begin. After collecting sap in buckets for small-scale syrup making, the Lloys decided to increase production. When they reached 125 taps, the Lloys purchased a small evaporator.

The maple sugaring venture quickly outgrew its original space in the garage, so the family constructed a building to house the gift shop, a two-by-eight-foot oil-fired evaporator and a reverse osmosis system.

Dewey said the open evaporator allows guests to observe the process. “With the reverse osmosis, we can concentrate the sap pretty well,” he said. “We’re making syrup efficiently – about four to five gallons an hour. Not quite like the big guys, but for our operation, it’s pretty efficient.”

In addition to pure maple syrup, Sharon makes a variety of treats including maple cream, maple butters and coated nuts. Since Dewey works off the farm part of the week, Sharon is the primary maple syrup maker. “All the sap comes to a pump house,” said Dewey. “The sap is pumped directly into the sugarhouse. Sharon does a great job with the syrup, and knows the ins and outs of the evaporator.”

Today, Balsam Ridge maintains 1,100 taps and makes about 300 gallons of maple syrup, most of which is sold directly from the farm. The family participates in Maine Maple Sunday in March, and syrup is featured at Christmas time and sold throughout the year.