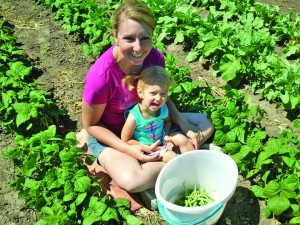 by Kelly Gates
When Kathy Hohl’s son Adam was in high school in 1994, he chose pumpkin production as his FFA project. He sold just enough of the orange orbs to neighbors and friends to pay for a small pizza party for his family.
After his younger sister grew pumpkins for her project, the family decided to make it the focus of their new business.
“We loved our pumpkin days because we had done that as a family and in 2004 our thoughts returned to pumpkins and we planted five acres with the help of Adam and friends,” said Kathy. “We sold them from our farmstead and were hooked!”
Within two years Adam returned with his wife Julie after living in St. Louis, and Harvestville Farm was born with Kathy, Adam, and Julie Hohl as co-owners.
For the first few years, the family rented a tent in the fall for their Donnellson, Iowa business and purveyed pumpkins to people in the immediate area. Over time, they built a barn retail shop, expanded their inventory to include a wider variety of produce, potted plants, fresh veggies, jams and jellies, salsas, dip mixes, country baked goods — among other items — and began attracting visitors from throughout the region.
Around 40 acres are now used for growing pumpkins. There are also tomatoes — including numerous heirloom varieties — as well as sweet corn, cucumbers, peppers, squash, gourds and all sorts of other vegetables grown there annually.
“We supplement our vegetables with items like Georgia peaches, Washington cherries and Muscatine melons and for a while, we offered all of our fruits and veggies through a CSA,” said Kathy. “Instead of the CSA, we now offer a weekly veggie and/or fruit box, with various sizes and prices. Today’s box is filled with lettuces, green onions, radishes, spinach and asparagus.”
People come from far and wide to experience the bounty of Harvestville Farm. They also come to enjoy the activities and events hosted by the farm.
In autumn, there are bonfire pits, a 10-acre corn maze, a smaller corn labyrinth, a children’s play area and pick-your-own pumpkin patch. The business also sells more than 100 varieties of gourds, pumpkins, and squash, baked goods, fall home décor and many other gift and home items.
Area schools descend on the farm in the fall to learn about how the crops are grown. Fortunately, one of the co-owners is a former teacher and knew just what the teachers and students would like to learn.
“Julie is an educator and has developed several age-appropriate curriculums for our school field trips,” noted Kathy. “For younger students, we talk about the many varieties of pumpkins and squash and let them feel and touch many of the more unusual varieties, but with older kids, we can get into more in-depth conversations about sustainable agriculture and the life cycle of the pumpkin.”
At times, a local artist is hired to design and paint miniature pumpkins with various school colors for field trip groups. The family also brings in colonial volunteers in period costumes who come to the farm to teach children how to make candles, bricks and rope.
An annual fall festival also entices throngs of locals. The event boasts a car show, pancake breakfast, an euchre tournament, barbecue and much more.
Customers are also invited to the site from time to time for seasonal classes, like the harvest basket tutorial, which teaches participants how to make an arrangement complete with gourds, miniature hay bales and other accoutrements.
“Fall is definitely our busiest time, but we also have activities during the summer, like farm dinners with a variety of themes,” noted Kathy. “We do an annual hog roast with farm grown sweet corn, cucumber onion salad, watermelon and peach cobbler. We also do a couple of high cuisine dinners made by local chefs or the culinary class from a local community college.”
The third major season at Harvestville Farm is winter. When the cooler weather descends on the Iowa farm, fresh Christmas trees are brought in from a Wisconsin tree farm and sold to customers on site. The staff also makes swags, wreaths and custom planters, centerpieces and other decorations from live greenery, with wreaths for larger organizations often reaching upwards of 72 inches in diameter.
The array of products and activities offered at Harvestville Farm keeps customers coming back from season to season. The Hohl family hopes to continue expanding its offerings, eventually adding a more extensive kitchen operation. Several other additions are also on the horizon.
“We do have one very small hoophouse that we are using to grow heirloom tomatoes this year as a trial run before jumping into high tunnels,” she said. “We hope to grow more indoors to complement our field production.”
The family also plans to continually update its product list to keep customers coming back each year. And Julie is committed to maintaining a high level of education, teaching as many youngsters about growing as possible.