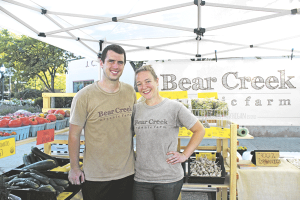 “Go West, young man!” is a phrase often credited to the 19th century American author and newspaper editor Horace Greeley. According to an oft-told anecdote, he was giving advice on where a young man might go to seek his fortune and prosper. But for Brian Bates, the message was “Go North!”

Bates, a native of Virginia, and his wife Anne (of Indiana), own and operate Bear Creek Farm in Petoskey, MI. They decided that their futures, and successes, would be to the north. As an undergraduate at Pennsylvania State University, Bates originally studied landscape architecture, but he soon saw his interests change toward edible landscaping. “I really started to see the advantages of productive planting over the ornamental,” he explained.

Bates said his studies at Penn State brought the coming effects of climate change to the forefront of his mind. “We were learning about the changes to come,” he said. “We were talking about how Virginia would soon become like Georgia.” He laughed, “I had no desire to live in Georgia!”

As he began to research where he would like to start his organic farm, Bates struck upon Michigan. “In terms of fresh water, cheap land and sandy soil, which is far better for drainage than clay, it’s a great place to set up a farm,” he said. “We were fortunate enough to get a microloan from the U.S. Department of Agriculture’s Farm Service Agency. We were able to purchase two acres, a tractor, a greenhouse and beekeeping equipment.

“Our original business plan consisted of ‘garlic, greens and honey,’ but we’ve expanded our mission quite a bit. Our current goal is to become the trusted producer of certified organic produce and raw honey in Northern Michigan, by delivering the purest products possible from our farm to our customers’ tables, while educating our community on the benefits of local, organic, and pollinator-friendly agriculture and enhancing our region’s local economy, environmental sustainability and access to nutritious food,” Bates continued. 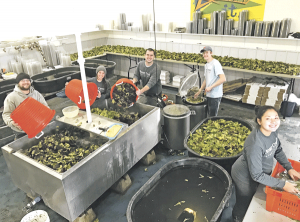 Bear Creek exceeded production expectations and has grown more quickly than planned. “We originally said that we wouldn’t need to hire any employees. We’d both have outside jobs, and I’d transition to full time at the farm in five years, Anne in ten. I was at the farm full time within eighteen months, and we’ll have ten employees for the upcoming season, our sixth season overall,” he said.

“That’s rare. It’s not just local, it’s hyper-local!” stated Bates. “We do most of our work with local and independent grocery stores.”

In addition to the successful vegetation side of the business, Bear Creek has also enjoyed its honey being very well received. “My thesis in college actually dealt with honeybees and pesticide exposure,” Bates said. “We actually started with just three hives. I had to drive them halfway across country in the back of a station wagon.” Bates paused, then added in a serious tone, “I do not recommend doing that.”

He went on to say, “Three hives became twenty, then twenty became sixty. While the honey today accounts for only about five percent of our total revenues, it’s not because the honey isn’t moving well. The vegetables are just moving at an amazing rate.”

In recognition of its eco-friendly work, Bear Creek has been recognized as Petoskey’s first USDA certified organic farm. In 2015, the farm was named a Local Food Hero by the Local Food Alliance of Northern Michigan. In 2017, Brian and Anne were named Entrepreneurs of the Year by the Petoskey Regional Chamber of Commerce.

As for what’s next, Bates was eager to state, “We’re just starting a $450,000 expansion project. We’ll be doubling our washpack … and tripling our greenhouse space. It’s scheduled to be done by Labor Day. Come check us out!”