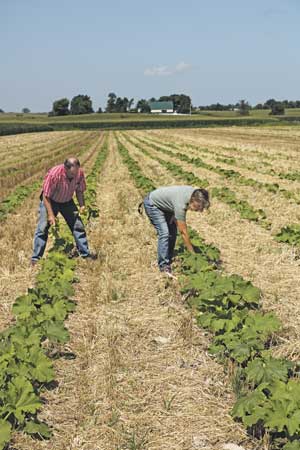 There’s no doubt that pumpkins herald a new season and consumers are anxious for the arrival of this age-old icon of fall. Although most consumers still seek bright orange fruit, pumpkins of all colors, shapes and sizes are selling well.

Part of the challenge of growing pumpkins is getting seed in the ground at the right time so pumpkins will be ready for sale when consumers want them. By early July, most pumpkin seed is either in the ground or will be planted soon. Successful pumpkin growers follow a cover crop and crop rotation plan with pumpkins to reduce disease risk. Planting pumpkins into a rolled-down cover crop helps keep fruits off the ground, resulting in lower disease risk and cleaner fruits at harvest.

Pumpkins are a warm-season crop and thrive in warm temperatures. Some growers use raised beds and plastic to increase soil temperature, optimize water usage and reduce weed pressure. Pumpkins should be fertilized according to annual soil tests. Seed selection should be based partially on the target market, but also on disease resistance. Many growers sow a variety of sizes, shapes and colors in one field, and usually experiment with a few new varieties each season.

Once seed is in the ground and seedlings begin to emerge, pollination is the most important factor in ensuring a heavy crop. The flower is only receptive for one day, and may require multiple pollinator visits for optimal pollination. Introduced pollinators (honeybees) should be in place just prior to bloom so they’re present and visiting flowers frequently.

While honeybees are effective pollinators for pumpkins and other cucurbits, they require a contract with a commercial beekeeper or management by the grower throughout the year. Other bee species, including bumblebees and native species, are efficient pollinators. Although most native pollinators are already present in the existing habitat, some do better with extra help such as pollinator species and artificial nesting areas.

Squash bees obtain nutrition from the cucurbit crop, while bumblebees require a season-long diet from early March through October. Bumblebees thrive on a variety of flowering herbs, woody vines, trees, native perennials and cover crops. Poor pollination manifests as misshapen fruit, fruits that fail to enlarge or fruit that brown at the blossom end.

Once pollination is assured and fruits are growing, it’s important to be aware of the predominant pests and diseases for your region, and how weather patterns and day-to-day conditions will impact diseases. Insects including squash vine borers, spider mites, cucumber beetles, aphids, seed corn maggots, western spotted cucumber beetles, western striped cucumber beetles and whiteflies are the predominant insect pests of pumpkins. Be prepared to scout pumpkin fields regularly, be able to identify the various stages of insects through the season and have a plan in place to interrupt insect life cycles.

Diseases of curcurbit crops are the bane of growers and also require constant monitoring and timely spray applications. Pumpkins’ affinity for warmth is also the main reason for the most serious diseases of the crop and require growers to be familiar with the identification and distinguishing characteristics of the fungal diseases most likely present in their growing region.

One of the most common pumpkin diseases is powdery mildew, which can occur at nearly any time during the growing season. Although healthy plants of resistant varieties should have some level of immunity, those varieties are not completely immune and growers should be prepared with timely fungicide applications.

Powdery mildew develops when dense foliage creates high humidity conditions around the plant in temperatures from 68 to 80 degrees. It manifests as white powdery growth on both upper and lower leaf surfaces and is first visible on the oldest leaves. However, unlike most fungal diseases, powdery mildew can survive lower humidity conditions and rain tends to inhibit development. The disease destroys foliage and exposes the fruit to the sun, resulting in discoloration. The spores of powdery mildew are dispersed by wind and can move into a region on wind currents.

Although some pumpkins in a field may weather a severe outbreak of powdery mildew that isn’t treated on time, planting resistant varieties along with consistent monitoring and appropriate treatment will ensure a viable, saleable crop.

In areas where downy mildew is a problem, growers must be able to distinguish between powdery and downy because treatments are not the same. Downy mildew usually appears later in the season, and early signs include yellow, angular lesions on leaves. Spores overwinter in southeastern U.S. and are spread by wind to other regions. Downy mildew can spread rapidly through a field, resulting in browned leaves that appear to be scorched.

Black rot, or gummy stem blight, is another pumpkin disease to watch for. This fungal disease affects the leaves, stems and fruits. Dark brown circular spots on the leaves, starting at the margins and spreading to the entire leaf, help identify this disease and some fruits may exhibit large, expanding lesions on the face. The characteristic brown gummy exudate, which is also the key diagnostic, is comprised of small, black fungal structures embedded in the diseased tissue. These structures, known as pycnidia, are visible with a hand lens. Like other fungal diseases, black rot develops in warm, high humidity conditions. Crop rotation with unrelated species helps break the cycle of black rot.

Fusarium crown rot, also known as Fusarium fruit rot, initially affects the lower stem or crown of the plant. The characteristic signs of this disease include overall plant yellowing, followed by wilt, collapse and plant death. The fruit often has visible lesions, sometimes pitted or larger sunken areas with white or gray mold. This pathogen is spread mechanically, so equipment sanitation is imperative in the case of an outbreak. Long crop rotations with non-cucurbit crops help reduce spore populations in the soil, although the disease can occur in ‘clean’ fields without disease history.

Phytophthora root rot or blight (Phytophthora capsici) is a serious fungal disease of many crops, including pumpkins. Zoospores from the reproductive phase of the fungus are released in water and spread by irrigation, irrigation equipment, water splash, wind and other mechanical means. Phytophthora is most often seen when soil is saturated due to excessive rainfall. Affected fruits exhibit cottony, white mold on the surface, which quickly overtakes the entire fruit. At this point, the vines are already infected and begin to die. Phytophthora spores are highly resilient and survive in the soil indefinitely. This disease can be particularly severe in cool, damp late summer weather conditions.

Although a well-planned crop rotation can help prevent some of these fungal diseases, a healthy pumpkin crop is more likely with regular scouting and immediate treatment when necessary. Maintaining careful records about planting, fertilization and chemical applications along with observations and harvest notes will help improve the crop each season.