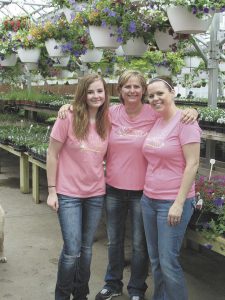 by Sally Colby
Building a greenhouse business without any experience in the industry is risky, but Diane Dickes’ interest in gardening provided enough of a nudge to get her started. The Fordyce, NE grower was convinced that her determination was enough to succeed.
“I wanted to do something that would allow me to stay home with my children,” said Diane. “It really wasn’t that hard because I love to learn. I can work hard and I’m not afraid to ask questions.”
After erecting a 30’ x 96’ polycarbonate structure in 2000, Diane’s Greenhouse was open for business. Several years later, another greenhouse was added; this one with 10’ sidewalls for more space. The original greenhouse has since been removed, but three 30’ x 96’ connected greenhouses stand in its place.
The season begins in February with early starts, including hanging baskets. In the past, the greenhouse was empty by July, but Diane found that workshops helped better utilize the greenhouse space.
“Last year, I started doing workshops, so that utilizes the greenhouse in October, November and December,” said Diane. She says that customers who attend classes usually don’t need as much help as they think they do.
Workshops for children are also popular, and customers have planned greenhouse birthday parties for both children and adults. Many women’s groups hold their monthly meetings at Diane’s Greenhouse because they can include a project. The events often bring old customers who bring friends who become new customers.
“No one leaves with something that looks bad,” said Diane. “When they do a container in early spring, they’re putting plugs in a basket, and the plugs are small and have no color. But when the customers return on Mothers’ Day to pick up their basket, they’re shocked to see how nice the basket looks.”
Diane says she has watched color trends for hanging baskets and has found that most customers prefer about five to six colors in a basket. “Baskets with two colors, or different shades of one color are not as popular,” she said. “I put purple, pink, red, yellow and white together and people love it. I’ve tried other combinations, but the first ones to sell out are the ones with the most color.” Diane added that texture is also an important factor in making a basket attractive, and she strives to balance color with texture.
Diane’s customers appreciate the variety of herbs and vegetable starts available at the greenhouse – especially tomatoes. She says customers prefer an uncomplicated tomato plant that will produce a nice red slicing tomato with good flavor. Diane’s website provides helpful hints about growing tomatoes with advice about mulch and proper watering. “I used to plant a lot of different varieties,” she said. “Now I stick with about 25 to 30. People know exactly what they want – it worked for them in the past and you cannot get them to change their minds.”
In addition to greenhouse crops, Diane’s offers a selection of perennials, and when it comes to first-time gardeners who visit the greenhouse, she provides as much help as needed. “I walk them through step-by-step and tell them exactly what to do,” she said. “I tell them how to plant, how often to water and how much water to use.” Diane noted that customers are more than willing to tell her about their past gardening experiences, which provides an opportunity for her to find out what she can say or do to help them succeed.
“They might be planting too deep, but the majority of gardening problems are with water,” said Diane. “Sometimes it’s too much water, but for the most part, they don’t water enough. I often advise customers to use a soaker hose and mulch so that they don’t have to water every day.”
Since Diane prefers to stay at the greenhouse and grow plants, she refers customers who request landscaping services to a local landscaper who sources all of his material from Diane’s.
By June, most people have purchased what they want for their gardens, but the summer is consumed with caring for perennials and planning for fall and the following year. This year, Diane plans to incorporate succulents in a summer workshop. “Succulents are really coming around,” she said. “We’ll do succulent containers, a succulent shoe and a succulent wreath. They’ve all been around for a while, but people want to create their own.”
Diane has found that many customers are coming to the greenhouse after having seen ideas on social media such as Pinterest or television programs that feature home improvement. Social media helps keep customers informed about what’s happening at the greenhouse, including promotions and classes.
Visit Diane’s Greenhouse online at www.dianesgreenhouse.com .