Hemp: Not just another greenhouse crop 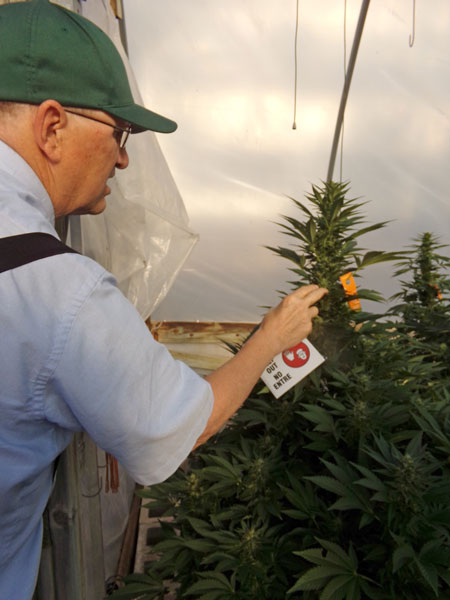 Owner/grower Ed Knapton of Berry Hill Farms of Cottage Grove, WI, inspects one of the plants he grows in his greenhouses.
Photos by Gail March Yerke

Greenhouse growers across the country are embracing hemp as a supplemental or even primary crop for their growing operations.

A four month turn in the greenhouse, hemp could potentially follow spring bedding plant production as an additional income stream. With the 2014 and 2018 Farm Bills opening the gates to legalizing industrial hemp production, there comes a definite learning curve when it comes to complex government regulations, insurance and even banking relationships. From seed sourcing and growing guidelines to testing outcomes and marketing, it’s a lot to evaluate.

The Commercial Flower Growers of Wisconsin decided to do just that with a recent program at Berry Hill Flowers of Cottage Grove, WI. The group’s event included a tour of the host’s greenhouses and a presentation by Dr. Kareem Kandil, chief medical officer of Docere Wellness, who spoke about best practices for growing hemp in the greenhouse environment and offered tips on harvesting and marketing. Kandil’s Oregon/Wisconsin-based company produces CBD oils as well as other naturopathic medications. The group of over 50 growers learned firsthand about hemp production and the science behind it. From seed and clone sources to grow media, nutrients and environmental controls, it was an introduction to hemp as a greenhouse crop.

Kandil began by identifying some of the different markets for hemp, including industrial uses of hemp and CBD oil-based products. Hemp can be produced under cover or field grown. The flower of the Cannabis sativa plant is harvested and dried for the CBD oil market. “My experience is that the quality of greenhouse-grown hemp flowers is definitely superior,” he said. It all starts with seed selection, however, and he recommends always working with reputable breeders and use feminized seed. This type of seed grows plants almost exclusively female. Without any male pollen present, it will produce the desired bud without seed.

“Feminized seed varieties are preferred, with an average cost of 80 cents to one dollar for each seed,” Kandil said. “Clones are genetically identical and cost anywhere from $3 to $6 each. Flowers can sell for as much as $400 to $500 per pound.” With supply and demand in a constant state of flux, he added, “It’s the wild, wild West out there.”

Berry Hill Farms owners Carol and Ed Knapton, along with partner Ra’ed Atshan of Farm Hemp USA, hosted greenhouse tours as part of the program. Atshan’s consulting company was brought in a month before the partnership started their first hemp crop. As part of the Wisconsin Hemp Pilot Program, Berry Hill Farms has dedicated 60,000 square feet of greenhouse space to hemp destined for CBD oil production. Greenhouse production initiated in May, with harvest in late September. 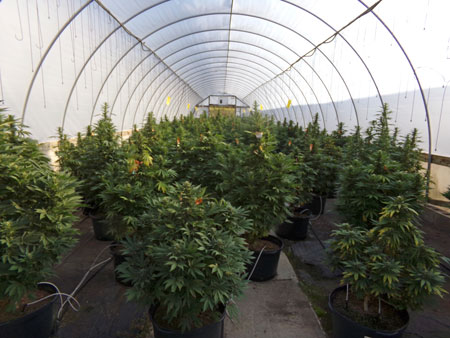 Greenhouse hemp production methods can vary from using traditional growing media in containers to hydroponic operations to aquaponics, known to integrate plants and fish within the growing cycle. Berry Hill Farms opted for the traditional route with plants started in smaller containers, later moved to 10 – 15 gallon nursery pots. Knapton said they are considering larger containers for the next crop cycle.

Many varieties appeared to be the size and shape of Christmas trees, differing a bit in height. Knapton showed how aisles throughout the greenhouses were set at six feet and plants were spaced to allow for optimum air flow. The spacing also facilitates easier harvesting. Hemp is a light-sensitive crop. Depending on the time of year in production, supplemental light or darkening shade cloth may be required to complete the grow cycle.

Knapton advised first time growers, “It’s a relatively easy crop to grow in the greenhouse using a standard fertilizer and soil used for annuals, but harvesting does take time and effort. Also, be sure to keep watching out for bugs. Disease prevention and air movement are critical.”

They started this first crop from seed and have started to take cuttings for later crop schedules. Knapton indicated that they were waiting for state testing results from the Wisconsin Department of Agriculture of Trade and Consumer Protection (DATCP) to approve the crop for CBD production. Testing is done for each variety grown and results need to come in below 0.3% THC for the crop to be approved. DATCP allows for a second testing if the first fails. The agency has 10 staff members assigned to collecting hemp samples across the state.

DATCP serves as “gatekeeper” of the burgeoning hemp industry in Wisconsin. The agency is charged with administering processor and grower licensing as well as the testing of hemp before it goes to market. In 2018 the agency licensed 245 growers along with 99 hemp processors. In Wisconsin, the additional cost of a processor license is not required of growers. While the number of issued licenses has grown five-fold in 2019, it is of note that not all registrations have followed through with growing hemp. Donna Gilson of DATCP’s Agriculture Resource Management Division said of the Wisconsin hemp industry this past year, “We had 1,247 grower licenses issued in 2019, with 1,075 of those growing at least some part of their crop in a greenhouse. Many growers start seeds in a greenhouse or non-field location. This year’s report found greenhouse growing is about 175 acres.”

She explained that DATCP is waiting to see what standards the federal government may announce before accepting applications for next year. “We hope to start accepting applications in Wisconsin sometime between November 1 and December 31 of this year for 2020,” she said. The agency’s website, DATCP.gov, offers information on allowed hemp varieties, testing requirements and related costs for licensing and testing.

It seems, however, that not all banking institutions have embraced the industry. Bank President Charles Miller of Citizens Bank of Mukwonago explained their bank’s perspective: “Our bank does work with industrial hemp accounts,” he said. “When hemp was first legalized last year in Wisconsin, many banks were not so sure about that. Out of the gate, some banks took a step back, didn’t understand [the product] and didn’t open those accounts. We were told by some of our customers that they knew of others that had tried multiple banks without success.” The bank, serving southeastern Wisconsin, currently has 10 accounts involved in industrial hemp from growers to processors and CBD product retailers. Miller acknowledged that the bank has to take extra steps in order to be in compliance with an overlay of additional federal banking requirements. They require the hemp state licensing and certification documents for accounts. “There are no additional restrictions to these accounts,” he added.

Besides banking, insurance coverage may have additional considerations. Let your insurance carrier know your plan of operation for a new account or changes to what your current policy lists for coverage. Security fencing may be required around the grow area. Finally, as with the banking industry, licensing and certification documents may be required.

The Wisconsin State Senate recently approved a medical marijuana bill that could be moved forward for approval by the State Assembly. Should the bill be signed by the governor, that one law would open the door to even more markets for growers. With an ever-changing legal and regulatory environment, it’s critical to know what your state requirements are for growing hemp. Like Kandil told the Wisconsin growers’ group, “It’s the wild, wild West out there.”