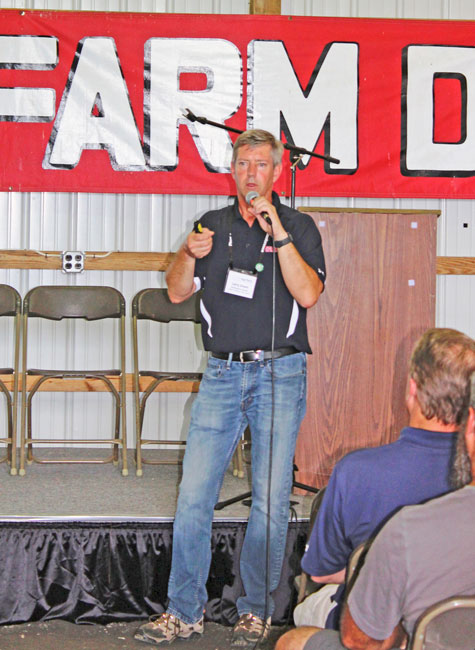 Larry Smart, professor, plant geneticist and breeder for Cornell, recently did a presentation on hemp.
Photo by Deborah Jeanne Sergeant

SENECA FALLS, NY – A standing-room only crowd gathered at Empire Farm Days to hear from Larry Smart, professor, plant geneticist and breeder for Cornell’s School of Integrative Plant Science Horticulture Section. The size of the group demonstrated their interest in getting in on the ground floor of the growing and profitable hemp industry in New York. But before operators rush to sow their acres in hemp, Smart offered a few caveats.

Farmers thinking they can try hemp on a difficult plot should re-think that plan before buying hemp seed, especially considering the variety of seeds intended for hemp oil (cannabidiol, or CBD) cost about $1 per seed.

Smart also warned about seed sourcing. “It’s a young industry and people will sell you seed that’s not well tested,” he said.

That’s a lesson he learned last season. Per New York law, anyone growing hemp in the state is subject to periodic testing for the level of THC, a compound that’s naturally occurring in cannabis plants. In hemp, it naturally occurs at minute levels that don’t offer any hallucinogenic properties, unlike marijuana, which contains higher levels of THC. A representative from the New York Department of Agriculture and Markets collects 10 to 20 samples from a farm to create an aggregate sample of the plot. “If it’s 0.3% or higher, they can destroy your crop,” Smart said.

The only plot in New York to not pass the THC test last season was one of Smart’s test plots which used seeds that likely had too much genetic material from marijuana plants. That test plot was destroyed – not a big problem for Smart – but a commercial plot destroyed for THC levels would represent a significant financial loss to the farmer. That’s the main reason sourcing from reputable seed dealers is so important.

Another reason is for uniformity of flowering times. Harvest is difficult if different cultivars of hemp grow together.

It’s also important to find varieties that grow well in a particular climate. Smart said the cultivar he grew at Cornell’s AgriTech test plots in Geneva last season was “very stressed” because of excess rain in a poorly drained field.

“The plants died within a week,” he said. “Without a need to irrigate, the plants didn’t get any fertilizer.”

Plants grown from cuttings are more uniform than those from seeds, but require more labor to plant.

Smart said the plants require good ventilation with enough space around each plant. Otherwise, growers won’t achieve the number of dry flowers per acre they want.

Typically, those growing for CBD oil sell dry flowers to processors who extract the oil. At Cornell’s test plot in Ithaca, growers averaged 0.8 pounds per plant, which is low compared with the pound per plant average expected. Neither of those compare with the elite growers in Colorado who get four pounds per plant.

Labor costs are also high for CBD, which must be hand harvested, unlike hemp grown for grain or fiber.

Despite these drawbacks, Smart believes that once farmers get over the learning curve of growing hemp, “it’s another crop to put in the rotation of corn and soybeans, if you can have a market for it.”

Per acre, growing hemp for grain or fiber costs $485 for grain and $545 for fiber. The crop value is $1,100 for grain and $800 for fiber. The returns are $625 for grain and $255 for fiber. Compare those figures with CBD dry flowers. The inputs are $20,000 per acre for seed or cuttings, mulch, irrigation and labor. The crop value is $56,000 for a return of $36,000. It’s easy to see why more farmers want to grow hemp for CBD oil; however, Smart said excessive hemp growers can cause the industry to become flooded with the product and drive prices down. That’s why it’s vital to obtain buyers beforehand.

“We need to focus on the genetics of THC and CBD biosynthesis,” Smart said. “We need to look at stress responses, flowering and sex determination and mechanization to reduce the costs of production.”