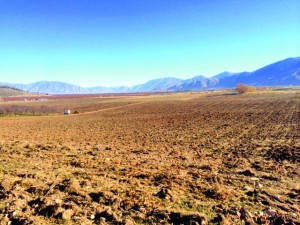 by Sally Colby
If you’re one of the many who tout the health benefits of tart red cherries, the Rowley brothers probably have what you want. The five brothers work together to grow fruit, including 500 acres of Montmorency cherries, based in Santaquin, Utah.
In 2003, the brothers took over the farm started by their grandfather in 1913. Phil Rowley, father of the brothers, currently oversees operations at Payson Fruit Growers, a local coop for tart cherry growers. “He’s been one of the pioneers in the dried cherry industry,” said Thad Rowley. The current operation includes a thriving farm market in Santaquin and a new farm market in St. George, Utah.
The Rowleys work together to keep the operation running smoothly. Thad acts as overall manager of the farms and teaches several of the classes offered through Rowley’s Red Barn. Tod manages the farm markets, while Jace handles the website, record-keeping and also helps at the farm markets. Scot manages the farm’s on-site juice processing and ice cream plant, and helps with field work, especially in spring. Mark runs the family’s Pintic Valley operation, which is west of the Santaquin base.
Right now, Thad and his crew are preparing ground for a new cherry orchard. “We’re trying to get a jump start on spring,” said Thad. “Some is recently acquired land, and some is old orchards that we pulled out. We’ll put in 50 acres of tart cherries this spring, so we’re getting ground ready now. New ground is worked with a disc then aerated prior to planting. We put the trees in with a tree planter in spring, during the last couple of weeks in April. We try to make the orchard as square and symmetrical as we can to make it easier for picking.” After the trees are in the ground, irrigation is installed and trees are mounded around the trunks to deter small rodents.
Thad said nursery stock comes from Washington as 3/4 in. or 5/8 in. diameter trees. “We plant them bare-root, and then wait until the trees are about five or six years old before we harvest,” he said. “The trees will produce cherries before that, but we use a shaker to harvest, so we have to wait until the trees are large enough that they aren’t harmed.” Prior to Phil purchasing the first cherry shaker in 1968, cherries were picked by hand.
Tree spacing is 18 ft. x 12 ft. and 18 ft. x 14 ft. so the orchard equipment doesn’t damage trees. Although Thad has fumigated ground in the past, he prefers not to because it destroys beneficial organisms in the soil. “Aeration and opening up the soil should help,” he said.
Although tart cherries are self-pollinating, Thad said it helps to have some bees to move pollen around. Each spring, local beekeepers bring bees to help with pollination.
Thad said the biggest disease issue with tart cherries is powdery mildew and the main pest is the western cherry fruit fly. “It’s similar to the apple maggot fly,” he said. “We trap for it and try to stay ahead of it.”
Another management step is keeping the orchard floor clean. “We try to keep it as weed-free as possible,” said Thad. “For the orchard floor, we’ll plant grass, and sometimes include alfalfa to fix nitrogen in the soil.”
In January, crews will start pruning cherry trees. “We want to get them hardened off for winter, then we start pruning,” said Thad. “We use a flail mower to chop prunings in the younger orchards. In the older orchards, we remove the limbs and burn them.” Thad added that burning pruned branches adds some degree of powdery mildew control.
After picking, the cherries are dried. Rowley said that they belong to the Payson Fruit Growers Coop, which includes eight farms. “We all process cherries through a processor that the coop owns,” he explained. “We process during harvest in a five-plus-one configuration which is similar to the way cherries are processed in Michigan. It’s five parts cherries and one part sugar so that when the cherries go into the freezer, the sugar infuses into the fruit. Then the cherries are pulled out throughout the year and dried.”
The dried cherries are marketed through Cherry Central, a Michigan-based marketing coop that the Rowleys belong to. Thad explains that Payson Fruit Growers Coop was formed in the 1960s as a farmer-owned business to provide a means by which local cherry growers could have cherries processed. Prior to that, cherries were marketed through canning companies to be used as pie filling.
The Rowleys’ popular cherry juice is sold through farm market and also through Utah grocery stores. They also make apple juice, and sell other dried fruit including strawberries, cranberries and blueberries. Market customers love the dried cherries at the farm market, along with apples and peaches in season. Apple varieties include several popular varieties, and peaches are staggered to keep an ample supply. “The one that’s really popular is the Elberta,” said Thad.
Several classes are offered to the public through the family’s Red Barn, including pruning, backyard berries, canning cherries, dehydrating fruit and hanging baskets and planters.
The farm offers school tours to help younger generations understand the importance of agriculture. Fall tours focus on the farm’s pumpkin patch and include a hayride to the patch, a presentation on fruit farming in Utah and a snack of fresh apple cider donuts.
Visit Rowley’s Red Barnwww.southridgefarms.com