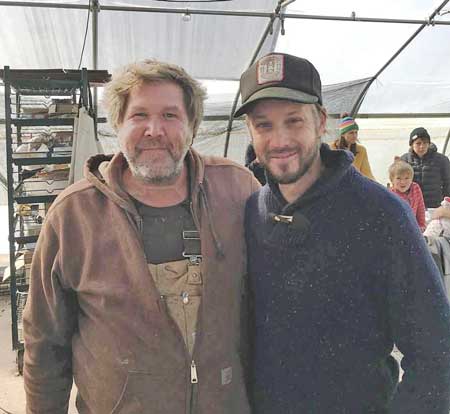 Grossing $350,000 from 1.2 acres of growing space seems incredible to many operators. For Conor Crickmore, owner of Neversink Farm in Claryville, NY, it’s all a matter of achieving optimal efficiency without using tillage or tractors.

“I think the reason Neversink is different is we never really focused on the growing aspect of it,” Crickmore said. “I think a lot of times, that’s what farmers do.”

Since farmers control little of what happens between planting and harvest, Crickmore emphasizes planning what he can to maximize production.

Previously, Crickmore had only grown a home garden. He had been working in the computer industry in the city and wanted out. He and his wife, Kate, moved to the country and planned to homestead. “At some point, we knew we had to start earning a living and that’s how the farm really started,” Crickmore said.

“We fell into it,” Crickmore said. “We really, really love it. It’s an amazing business to have.”

Crickmore starts with soil health. He balances the soil chemistry and physics. Chemistry relates to the results of his soil test to make sure that the nutrients are in balance. He hires a soil consultant and Crickmore also performs soil tests on 3,000 to 5,000 square feet every year, resulting in about 20 tests annually.

“I’ll change the mixture of the area to get a better result,” Crickmore said. “I’m trying to make it all the same. Getting it in balance is about taking care of anything there’s not enough of or anything of which there’s extra.”

He also balances the physics of the soil, such as too much clay, too much sand, not enough organic matter or too many rocks. He tends to have sandy soil, so adding peat, clay and compost before planting helps.

“When those two things are in balance — chemistry and physics — you’ve created the perfect environment for the biology of the soil to thrive,” Crickmore said. “After that, it goes to maintenance. That’s where fertilizer comes in.”

He’s also careful to not compact the soil by walking or driving on it. He aerates the soil manually, using a broad fork. He fertilizes with compost, alfalfa meal, soybean meal, kelp, fish meal and other organic material and no plastic is used on the farm. He believes that a constant, slow feeding of organic material feeds life into the soil.

Intensive planning ensures that he has a crop in all his fields at all times. Since he manages his soil health so closely, Crickmore never has to leave a field fallow.

When he first began the farm, he experienced significant pest problems. However, by promptly addressing pest issues, such as moving a crop into the greenhouse, he permanently solves the problem.

As a grower certified by NOFA New York, he can’t use pesticides or herbicides. He uses no weed suppression system except hand cultivation and flame weeding. Fastidious weeding means that the weeds don’t have the chance to go to seed and spread.

“I try to not have hand weeding necessary,” Crickmore said. “I have a system in place for the cultivation tasks. There are steps everyone follows. The first step is to walk the whole area, looking for any weeds that are going to flower or perennial weeds. They aren’t cultivatable. They continue to re-root. You’re just cutting off the top so we remove them before cultivation…I take the flame weeder every week. It makes the system much easier.”

Before replanting a bed, he burns it off with the flame weeder.

“Having the farm weed-free affects everything on the farm and really affects profitability,” Crickmore said. “Weeds increase the pests and the work of harvesting. It’s all around bad news.”

Crickmore staggers plantings so that if a disease occurs, it won’t wipe out the entire harvest.

“I don’t mourn the loss of anything we’re planting,” he said. “I rip it out and move on. With organic farming, its next to impossible to fix problems like that.”

He grows his tomatoes in the greenhouse, so blight rarely affects them. He vents the greenhouse to keep humidity down and thus inhibit fungus growth. About 25 to 30 percent of what he grows is in greenhouses. Crickmore said if he could, he’d put everything in greenhouses since it would nearly eliminate management effort.

Every year, he erects a new hoop house, which also extends his growing season. By using enclosed space heated with forced hot air, he gets a few weeks’ jump on harvesting crops such as potatoes. Crickmore counts that as a huge advantage for marketing to wholesale buyers.

He also sells produce at farmers markets, sells online courses on increasing farm profitability and recently launched a product line targeting small scale farmers. He promotes the various divisions of the business on Facebook and YouTube.

Crickmore employs two to five during the summer and two during the winter.

He advises others interested in maximizing their produce profits to “learn as much as you can at the beginning so you don’t have to struggle at the start. The information wasn’t as available when I started as it is now. So much can be avoided by starting with the right equipment, philosophy and system. It’s something I wish I had done…It seems like a lot of people focus on, ‘How do I grow spinach?’ and that’s the least important part of running a farm. The efficiency of the business is much more important.”