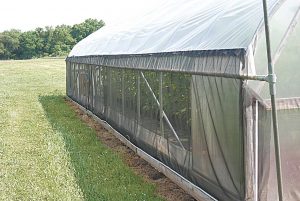 by William and Mary Weaver
In 2012, Steven Bogash, PSU Extension, began a combination of studying the best ways of growing high tunnel cucumbers, variety trials, and trials of materials to prevent soil borne disease in potting media so it could be reused repeatedly. The work was completed in 2015.
“By 2014, we were getting somewhere,” Bogash stated. “We had found several really good varieties, we had better trellising, AND we had succeeded in keeping the house free of cucumber beetles, using 5’-wide rolls of plain screen door screen.”
One thing that has always characterized Bogash’s projects has been an emphasis on practical solutions that work. “Using this screen door screen over the open sides to keep out cucumber beetles was a big step forward, and really simplified our spray program. Every time you spray for cucumber beetles, you’re also wiping out your beneficials. Plus, no cuke beetles equals no bacterial wilt.”
To apply the screen, lock the side up and put it in the wiggle wire track. “Then go crazy with the staple gun. You need a decent seal, not a perfect seal. Cuke beetles aren’t going to try to probe around looking for a tiny place to slip in.” Build a box around the intake louvers also, and screen them.
When you first see cucumber beetles, put up your screen. “It’s not like they hide.” Then spray with pyrethroids to kill any adults that may have slipped in. “That’s your #1 job for the moment. Having no cucumber beetles in there changes everything!” To avoid accidentally leaving the screen door open, put a spring on it. Be on the alert. “One year, before we used screening, when I closed up on a Friday afternoon, I saw no beetles. The week before I had sprayed with two pyrethroids. When I opened up the next Monday morning, there were cucumber beetles partying in the rafters.” Check carefully!
With your cucumber beetles screened out, all you have to manage with your pest program is emerging aphids, western flower thrips and spider mites. These tiny insects can slip through the screen, but they can often be managed with softer materials that are not as hard on beneficials. “For these pests,” explained Bogash, “I rely on a very proactive biological pest program that uses Grandevo, MET-52, and M-Pede at 3 percent. You have to have a short re-entry interval and PEI. You’re picking those cucumbers every day.”
The biologicals have no resistance issues, and fortunately, all the materials for spider mites also kill broad mites. Also, you can choose from a number of different materials. Scout your plants regularly. You can see spider mites on the bottom of the leaf. “If you see webbing, you’ve gotten way behind. At that point,” Bogash believes, “the best thing you can do is rip out all the plants, clean up the high tunnel, and plant all over again. That’s one reason I like high tunnel cukes,” he continued. “When disease and insect problems start to become widespread, usually at about 6 to 7 weeks into harvesting, you can just replant, and in 45 days you’re harvesting again.”
The parthenocarpic varieties best for high tunnel growing have all-female flowers and pollinate themselves. Insect pollination gives crooked fruit.
Plant your transplants (first planting in spring) or seeds (later plantings) in a mix high in compost and coir — preferably 12- 18 percent coir.
With a mix high in compost and coir, you might have $3 to $4 cost in each pot, but you just have to add a little more mix on the top of the pot when you plant again. This mix doesn’t compact like perlite. Re-use makes the mix quite inexpensive. “We have had no soil-borne disease at all. We don’t fumigate the pots. Good materials to prevent soil diseases are root inoculants. We have used the same mix over and over for 6+ years.”
One downside to parthenocarpic cukes is the cost of seed. “Once customers get used to the quality and flavor of tunnel-grown cukes, though, it will be hard to sell them field-grown again. The quality is so much better that prices tend not to drop much through the season. Chefs love them.”
The plants in the variety trials were planted two per pot, in 11-inch pots. Bogash learned that Minnesota and New York growers plant at a higher density but prune more, and “the yields are not all that different.”
Prune the vines to a single leader with one-node breaks at least once a week, and clip them to the mesh, from the time they’re waist-height until they reach the purlin. Plastic vine clips are reusable if dropped in Green Shield between crops.
Powdery mildew (PM) typically arrives after the vines reach the purlin and start to climb back down, when you’ve been picking for a couple of weeks. “Powdery mildew WILL come! Last year Torino stopped it in its tracks. Pick off the bad leaves, and then go back to softer materials. I use a basic proactive program of Regalia, Actinovate AG, and Stimplex, at 5-day intervals.
“Every one of my crops has had one bout of downy mildew at three weeks. We were using Regalia, and I put some RanMan in the tank. For downy mildew pressure, use Tanos, Curzate, or RanMan. We use a Dramm BP4 sprayer with about 150 PSI, producing fine droplets for better coverage and foliage penetration, (including backs of leaves,) and better control.”
Bogash raises phosphorus and potassium when the plants begin fruiting, and does tissue tests to watch the calcium and magnesium levels. Bogash warns, “When you add calcium and magnesium, be sure that they are chelated, or you’ll end up making fertilizer gel.”