Homegrown for a local market 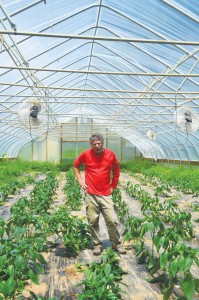 by Sally Colby
Farm names often reflect a property’s location or unique features, and in the case of Bull Run Mountain Farm, the ‘mountain’ part is accurate. Leigh Hauter has been operating the farm carved out of a mountainside in The Plains, VA, since 1999.
Hauter started the farm as a CSA after working with community food projects in the Washington D.C. area. “There were no other CSAs in the Washington, D.C. area when I started,” said Hauter. “Then very quickly, there were three of us, and now there are 75 CSAs in the D.C. area.”
The 100-acre farm is still primarily wooded, with about 25 acres cleared for greenhouses, high tunnels and in-ground plantings.
The farm has been marketing through its own CSA since its start. “At one point I had 500 or more shares, and I got to that number by word-of-mouth,” said Hauter. “This year I’m down to 200 shares.”
In developing his CSA, Hauter experimented with several styles, and is currently using a system that has customers coming to his farm along with a distribution plan for the D.C. suburbs. “It used to be a one, two or four person share, but no one else was doing it that way,” he said. “I switched over to small, regular and large so customers can compare to other CSAs.”
The farm includes three 32’ x 96’ greenhouses and six 17’ x 96’ hoop houses for both starting and growing. Hauter starts seeds in February then transplants in mid April to a propane-heated greenhouse. Hauter maintains a record of everything he has grown since 1999, and tracks the performance of varieties as well as which vegetables were offered in each weeks’ shares.
Hauter has been using all organic practices since he started, but doesn’t see any reason to go through the process of becoming certified organic. “I’m not selling to anyone but my members,” he said, “and they can come to the farm and look at everything themselves.”
Soil amendments to help improve the tilth of the rocky soil include poultry litter and spent mushroom compost. Hauter also makes his own compost on the farm with tree trimmings from the local power company. Water for drip irrigation is sourced from an artesian spring that is uphill from the greenhouses, and works by gravity flow. Hauter has a 150,000-gallon holding pond for water along with several 3,000 gallon storage tanks that are kept full and ready to use.
When selecting what to plant each season, Hauter concentrates on both customer desires and what grows well in the area and under the conditions on the farm. “I’ve been growing Snow Crown cauliflower forever,” he said, naming one crop that he’s still experimenting with. “I’ve tried Packman too, but I’m looking at different varieties. I grow about 20 different varieties of tomatoes, 10 of which are heirlooms.” Tomatoes are grown in several areas of the farm, including a hoop house with 500 plants and two outdoor plots with 900 and 1,000 plants each.
By summer, the outdoor beds are filled with an assortment of vegetables including pumpkins, cauliflower, cabbage, assorted hard squash, Brussels sprouts, watermelon, cantaloupe, basil, onions and garlic. “I grow a German stiff neck garlic variety,” said Hauter. “I dry it in the barn.”
Root vegetables are difficult for Hauter to grow because of the extremely rocky soil. “I can’t grow carrots in the ground here,” he said. “But I put in some raised beds for carrots, and that works. I’ll grow potatoes with tomatoes, and I also grow some sweet potatoes.”
Some of the crops grown on Bull Run Mountain Farm are rather atypical, like purslane – a plant most people might think of as a weed. “I have people who ask for purslane every week,” said Hauter. “People think of it as a weed, but it tastes good and it’s great in salad. This year I had enough purslane for six weeks.” Ground cherries are also highly popular among customers. Hauter says they’re commonly seen in Europe in upscale restaurants usually as part of a salad, but less often in the United States.
Many summer shares include a potted herb, such as parsley, which gives shareholders a unique item that they can continue to grow and harvest. Although corn is sometimes included in the shares, Hauter doesn’t grow the corn, but makes customers aware of its source and says they don’t mind that it isn’t from his farm.
The share delivery season runs for 19 weeks, although customers can pick up produce shares at the farm starting in May, for five weeks. Deliveries begin the second week in June. Whether distribution is on the farm or at another location, Hauter uses a white board to list the vegetables available, and how many of each, for that week. “The night before I send out a list of the vegetables,” he said. “But when I get out in the field, I might find that I don’t have that, and switch to something else. With the board, people know how many of each to get and can pick out their own.”
Hauter has a regular route to take produce shares to pick-up locations in Falls Church, DuPont Circle and Alexandria; and has been doing those stops since the beginning. Shareholders know what time to show up at the site, and Hauter allows an hour for customers to pick up shares. They can switch stops if they want to,” he said. “They just have to give me a days’ notice.”

One of the biggest challenges of growing produce in a mountainous region is wildlife damage, especially deer. Hauter maintains a 10-foot fence around the 25 acres, but deer often breech the fence by way of fallen trees.
For more information visit Bull Run Mountain Farm online at: www.bullrunfarm.com .