Honey and yeast work together to make mead 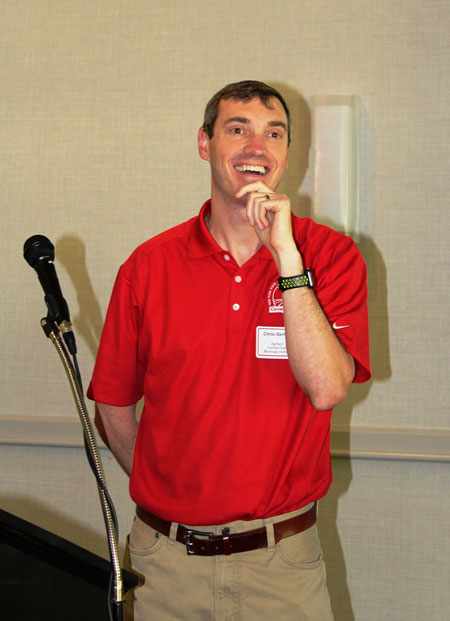 GENEVA, NY – A lot can happen to honey as it’s transformed to mead. Chris Gerling, Extension associate and manager of the Vinification & Brewing Laboratory at Cornell AgriTech in Geneva, and Kaylyn Kirkpatrick, an Extension associate at Cornell AgriTech, led a discussion on interactions between yeast and honey in making mead at an event led by Pilar McKay, agriculture economic development educator with Cornell Cooperative Extension Ontario County.

More than two dozen attendees came from several states representing experienced mead makers and those new to the craft.

Although different types and forms of sugar may become part of the process of mead making at different times, it all starts with honey.

“With honey, it’s sugar yeast can access,” Gerling said. “Roughly half the amount of sugar we start with is what we have in the end.” As yeast ferments, it can yield up to 15 – 20% alcohol. “Why does yeast do this?” Gerling asked. “To make energy to keep going.”

But going too far can mean too much alcohol. Mead makers must keep their product within 14% ABV.

“Fermentation is a rough road for yeast,” Gerling quipped. “For good fermentation, we want the yeast to stay in the growth phase.”

He listed factors that inhibit yeast growth, including high or low pH, lack of nutrients, high alcohol, high or low temperature and rapid temperature changes, which can “shock” the yeast, stunting its growth or even killing it. Gerling likened yeast’s stressors to someone walking in the woods. If it rains, it’s not a big deal. If the person becomes cold and it rains, that’s a little more dire. If they become hungry while cold and wet, it can become an emergency.

Gerling explained that yeast assimilable nitrogen (YAN) includes ammonia, which he compared to junk food for yeast, and free amino nitrogen, which offers yeast a quality meal. While consuming ammonia, “it gets excited and crashes. The free amino nitrogen is like a Cobb salad. You get the vegetables and protein.”

Continuing the metaphor, Gerling said that adding YAN incrementally throughout the fermentation process may be more beneficial than adding it all at once, like a person eating three meals a day instead of one large one.

Yeast’s nutritional needs also vary by its variety. Some need little nitrogen to consume sugar; some need more. Yeast should be stored cold. Since most producers use freeze dried yeast, it requires rehydration. Mead makers should use one gram of dry yeast per gallon of water (ideally non-chlorinated) combined without stirring for 20 minutes and then stirred for 10 minutes.

The water/honey mixture temperature is also an important factor in successful mead making. Gerling said it should be 104º F. “Often, we hear people say they pitch it straight in. Yeast is pretty hard but you owe it to yourself to have the best chance. Don’t dump yeast straight into honey water. That will shock it,” Gerling said.

Not taking care of protein problems will cause haziness in the mead. Some producers don’t mind haze while others abhor it. Gerling said either viewpoint is fine; however, those who want clear mead should boil and skim the mead. That will likely take care of most of the protein overload, but can affect the flavor.

Pasteurization for 20 minutes at 150º F fixes the microbe load, eliminates some excess protein and doesn’t cause the unwanted flavor changes of boiling; however, pasteurization leaves more protein than boiling and requires specialized equipment. For those who choose pasteurization, Gerling suggested doing so after bottling to avoid any risk of contamination.

Ultrafiltration represents the third option Gerling suggested. It nixes the microbe load and all of the protein, but it’s costly. “Or you can just add water and not do anything and just deal with the haze,” Gerling said.

Unlike grape juice, which doesn’t alter its pH much during fermentation, Gerling said that honey “is not good at it.” Adding a fruit juice or wine or adding carbonates can fix the pH while making mead. Flavoring mead can help makers stand out from the growing competition; however, makers need to be careful in both receiving approval of their recipe and process and also in how they label. Both of these factors can cause problems.

“They’re not necessarily good or bad but you have a lot of decisions to make about mead,” Kirkpatrick said. “You have to be careful about how you introduce flavoring to mead. You may have to call it ‘mead with natural cherry flavor.’”

For most mead beverages, adding sweetening and flavoring agents to the yeast and honey base must happen after fermentation. But Kirkpatrick warned that adding too much sweet stuff may trigger further fermentation. She added that some fruits contain pectin and different levels of pH which can affect the mouthfeel of the final beverage. Even among different varieties of the same type of fruit, these aspects can vary widely and affect the mead.

Fining at the end of the process helps remove elements that cause a cloudy appearance to mead, though Gerling warned that they can cause some “collateral damage” to the flavor.