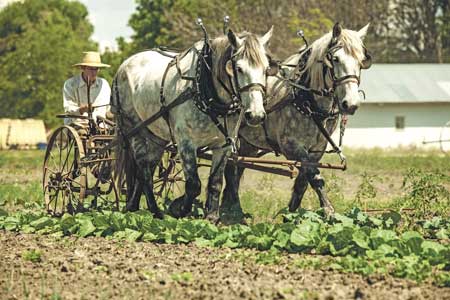 Although Chandler Briggs grew up spending most of his time outside, it was on the beach in Southern California rather than a farm. He was the first and only one in his family to catch the farming bug. Both Briggs’s parents are teachers, a career he contemplated as an environmental studies major at the University of California, Santa Barbara. “Then I decided that I wanted to actually farm more than I wanted to teach about food and farming,” said Briggs.

His first experience growing vegetables was during college, while living in a house “with a bunch of punks, hippies and coop gardeners,” he recalled. They had a large garden and that was when he began to realize he could grow food for a living.

Since his college didn’t have an ag program, he pursued his farming education through apprenticeships, which lead him to Northwestern Washington. It was there he discovered farming with horses.

“I actually met a horse-powered farmer my first season farming and I thought it was cool, but I didn’t really indulge myself in that as a possibility until years later,” said Briggs. He later began visiting that farm and another in Sequim, WA, where he learned to drive horses for work-trade once a month.

Briggs gathered skills from a few other horse-powered farms, then moved to Walla Walla in Washington’s Southeastern corner to work on Welcome Table Farm, an organic vegetable farm that was horse-powered at the time. He spent three years working with the horses three times a week, becoming a better driver through repetition.

While working at Welcome Table, Briggs was buying equipment to start his own farm, which he began in 2014 on an eight-acre plot of land in neighboring College Place. “We planted garlic the day we signed the lease,” said Briggs, who currently cultivates six acres with his partner and co-owner Leila Schneider, who manages the farmers market and is also a part-time pastry chef.

They acquired their two draft horses, Dusty and Jackson, from an Amish farm in Iowa. The 10-year-old gray dapple Percheron geldings each weigh around 2,000 pounds.

Briggs had several reasons for wanting to run a horse-powered farm. “First and foremost…it is enjoyable and I don’t think we would do it if we didn’t enjoy it,” he said. “I wanted to produce nutritious and delicious food with as little inputs and creating as little externalities as possible for my immediate environment and the global environment.”

Horses are easier on the fields because they don’t compact the soil as much as tractors. This allows plowing to begin earlier in the season. The draft horses can maneuver into smaller spaces than tractors and create compost. “They maintain nutrients on the farm,” said Briggs. “If you make your own hay then they get the nutrients from the grass. That is a really cool aspect. It really limits the amount of inputs that we have on the farm, because we are able to make our own compost and build soil by managing them on a pasture rotation.”

Briggs admits using horses is more demanding than traditional farming, but the challenge is part of why he enjoys it. “The horses also provide us with a deeper [and] more meaningful connection to the job by making it more difficult,” he said. “Because of the way the equipment works, we need to be more observant and more thoughtful about how we interact with the soil. With a tractor and rototiller, you can essentially pulverize — wipe the chalkboard clean, so to speak — and clean up any sort of mess or mistakes. With horses, we don’t have that ability.”

The lack of farm equipment was also another appealing aspect to Briggs. “It feels more accessible for a small beginning young farmer,” he said. “Even though the beginning educational component is harder to find, or harder to achieve, the equipment is more approachable than engines. I can work on equipment with a torch and a small stick welder and essentially create or fix anything that breaks because it’s all very basic in its design.”

The farm does utilize tractors, primarily for mowing to help break down materials faster to best optimize crop rotations, and for pallet forks. “We’re not absolutists with horsepower if it makes the job easier, makes the farm sustainable in the sense that we are going to sustain it through the years,” he said. They also use a small rototiller for their smaller salad greens field to eliminate the potential for contamination from manure since it is only 30 days from seed to harvest.

The farm grows around 30 vegetable crops and several varieties of each. They grow 10 different varieties of lettuce throughout the year and are expanding their radicchio and chicory offerings for more winter greens availability. They sell to restaurants and directly to customers at a summer and fall farmers market and through a local grocery store, continuing to work on getting the right quantities dialed in. This was the first year they were able to supply customers with vegetables throughout the winter.

“One of our goals is to offer produce year-round, which helps us keep the customers happy and interested,” said Briggs. “It keeps money flowing into the farm and hopefully eventually it will allow us to maintain at least some year-round employment, where we don’t say goodbye to our employees for three months.” The farm currently has three full-time employees during the growing season.

After three seasons, Briggs, who said he never owned an animal other than cats before his two draft horses, still considers himself a beginner. He has been able to find resources and advice from other horse-powered farmers in Washington and Oregon. Every year they hold an informal gathering called Draft Power Farmer to Farmer, held in different locations throughout the two states, which are home to about 10 draft-powered commercial farms, said Briggs.