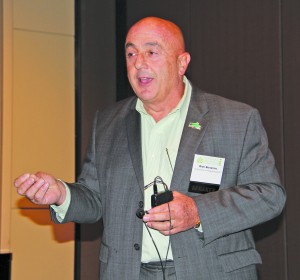 by Laura Rodley
Genetically modified organisms (GMOs) — crops modified to have desirable traits of resisting pests or herbicides to control weeds, insects and diseases — have long been a hot potato topic. This past May, Vermont Governor Peter Shumlin signed a bill into law requiring labeling of GMO foods — the nation’s first law of its kind. Additionally, labeling was a voting item Nov. 4.
UMass Amherst’s Rich Bonanno spoke on this issue at a workshop entitled “Hot Topics: GMOs and Neonicotinoids.”
Genetically modified organisms are “not creation of genes. It’s movement of genes,” said Bonnano. With traditional plants, you can only breed within a species. With GMOs, you can move things outside species, outside their genus. “You can do cucumbers versus geraniums,” said Bonanno.
Genetic engineering extracts and isolates a specific DNA segment that makes up a gene and inserts it into plant cells. Plants are then grown from successfully changed cells using tissue cultures. The new gene is transferred into the crop population via traditional plant breeding.
GMOs are regulated by the EPA, and it is the FDA that concerns itself with food safety. If you, “Move something from peanuts into tomatoes, if a peanut allergen is moved into a tomato, that’s FDA’s role. [Only] if FDA finds a difference in nutrition, allergens, toxicants, would labeling be required. Advertising can be confusing. Currently the only food label that ensures no-GMO is USDA-certified organic.”
Farmers growing GMO seeds or growers of GMO crops must sign licensing agreements. “If you grow Bt sweet corn, you can’t sell transplants to your customers.” This applies to greenhouse growers raising GMO yellow and summer squash transplants, or sweet corn transplants, who must sign licensing agreements, and can’t sell these plants to homeowners. As they are hybrids, you wouldn’t save the seeds, he said.
“Homeowner seed packets do not contain GMO seeds. Some garden centers advertise they have seeds that are non-GMO. But, so does everyone else,” Bonnano said.
Some greenhouse growers post signs stating they don’t sell GMO products, responding to customers’ concerns. “Labeling laws did pass last night. A lot of people are exempted from it, like most farmers,” said Bonanno. “The effect of eating GMOs depends on where you go for your information.” Regarding adverse health effects, “Coming from a scientific background, I don’t see anything I can latch onto.”
Following Bonnano, Dan Gilrein of Cornell University, Long Island Horticultural Research and Extension Center, spoke on Neonicotinoids (neonics) that contain compounds chloronicotinyls and thianicotinyls, related to nicotine. They hone into a place in the nervous system and wait for nerve signals to respond. Insects are much more sensitive to them, so they’re used in pest control.
Neonics are popular as they can be applied in one drench. “You don’t have to spray them to be highly effective, regulatory safe compared to things we were using to our animals and our workers,” said Gilrein. Their use affects honeybees, already plagued by varrao mite, American foulbrood virus and poor nutrition due to loss of foraging.
During a study on neonic toxicity, it was found that of 71 plants bought from Home Depot, Lowes, Walmart and Orchard Supply Hardware, 51 percent had neonic levels strong enough to kill bees.
If using neonics, he said, use foliar applications versus drench, or apply early in crops, more than five weeks before shipping. Avoid spraying open blooms, especially close to sale. Tristar has far lower toxicity to honeybees than others. Limit to one application or, if possible, spot treatment.