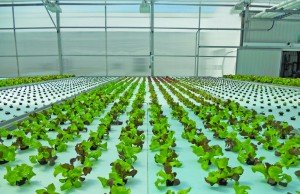 by Sally Colby
Todd McWethy has always been interested in plants, and that enthusiasm led him to formal education in the field. He landed jobs in landscaping and as a nursery manager, and eventually returned to school for a second degree in plant science.
“While I was there, I took a course in hydroponics,” said McWethy, “I have a love for plants and growing things. Hydroponics intrigued me, and it was something I had played around with on a hobby level.”

McWethy had an opportunity to go to Anguilla in the Caribbean for his required internship. “The owner created a hydroponic farm there because it’s a non-arable island,” he said. “Most of the produce took forever to get there and it was very poor quality. The owner had visited the hydroponic display at Epcot Center and wanted to do the same thing at his place.” McWethy worked with hydroponics pioneer Dr. Howard Resh in Anguilla for several months during his internship and while there, considered whether hydroponics would be viable at home in Michigan.
Meanwhile, McWethy’s father purchased 30 acres of farmland in Three Oaks, MI that was part of a farm his great-grandfather had owned. The farm’s location near several metropolitan areas makes it the ideal location for vegetable production. “We’re an hour and a half from downtown Chicago, which is a huge market,” said McWethy. “We decided to set up there.”
That was 10 years ago. Today, McWethy and his wife Kristen are successfully growing produce year-round in Michigan. They started with tomatoes, but recently stopped growing those in favor of crops that are less labor-intensive. In 2008, when the future of hydroponic production seemed promising, McWethy tripled the size of production space — a three-year project.
One of the expansion challenges was water. With no working well on the property, McWethy was faced with becoming creative. “We were using reverse osmosis on water from a 2.5 acre pond on the property, but the filtration system wasn’t efficient,” said McWethy, recalling countless sleepless nights repairing the system. “If one part of the system went down, we lost the ability to have water. When we expanded, I put a lot of thought into that issue. When I looked at the whole facility, I realized that it was a big footprint. I started doing some math — what could we gather in regard to rain? One quarter inch of rain translated to 45,000 gallons of water.”
The expansion included interior downspouts to prevent freezing issues. Water from those downspouts goes into a pit, and from there is pumped to a water storage building where a series of tanks holds 110,000 gallons at any given time. Another water source was discovered accidentally. McWethy explains that as they were building the new facility, they had some problems drilling holes for footings — as soon as a hole was drilled, it filled with water. Because the plan was to use radiant heat, it was essential to have dry ground below the greenhouses. “We hired someone to come in and install drain tile, and that water is diverted into another pit,” said McWethy. “It’s our secondary water source. About 80 percent of the water we store is rainwater, 15 percent is from the tile drain and about 5 percent is pond water.”
Another detail McWethy worked on during the expansion was ensuring that all of the filtration processes were independent. If one section failed, it could be easily bypassed. “There’s a lot of redundancy in the system in terms of ozone generation, ” said McWethy. “We use ultraviolet sterilization and we mixed media filters and ultimately, reverse osmosis. We store that water, about 45,000 gallons, in another building and it’s primarily for the plants. A second set of tanks holds chlorine-treated drinking water.”
The reverse osmosis system takes care of the need to calculate nutrients according to water tests. “We’re stripping the ions from the water, so we’re dealing with a blank slate,” said McWethy. “That’s the way I wanted it to be, especially because we have recirculating systems. I knew that over time, as we were reusing the water, minerals can build up. We take everything out of the water and put back what we need. We can manage it a lot better that way.”
At the time of expansion, the greenhouse had in-floor heat. Now, instead of forced air unit heaters, hydronic unit heaters are in place. A central boiler system heats the entire set of houses; the hydronic system pushes 180 degree water through a coil with a fan behind it. Aluminum fins near the gutters help with snow melt, and when summer humidity is high, fins and venting help to dehumidify the houses.
They’ve also switched from propane to natural gas, which was a high cost up-front but more economical now.
Although the original greenhouse was about 10,000 sq. ft., the McWethys now have close to 30,000 sq. ft. under roof. They’re growing microgreens, baby leaf lettuce mix, baby kale, baby chard, arugula and several culinary herbs including basil, chives, oregano and thyme. He and Kristin do the harvesting and packing themselves, using clamshells for retail and bags for restaurants. “We’re still experimenting and fine-tuning to make current crops better,” said McWethy. “How can we produce better flavor, and are there different varieties we should be using? We might create a second mix, one that’s spicier with mustard greens and arugula.”
McWethy markets to to several independent grocery stores and restaurants, and welcomes feedback from his customers.
IPM includes constant monitoring of leaves and stems, along with sticky cards. No pesticides are used on crops. McWethy eliminated a significant portion of the shorefly population by laying sticky cards on the lettuce boards to catch the flies. He also sprayed after harvest to prevent reinfestation. “As we harvest the lettuce benches and the crop is out, we leave the boards in and spray just the boards with horticultural soap,” said McWethy. “That worked very well — we didn’t have to spray the crop at all.”
With the expansion complete, McWethy is ready to move into new markets this year. “We’ll be ready to take on more customers as we gain full use of all the greenhouses,” he said.
Visit McWethy Farms on line at www.mcwethyfarms.com