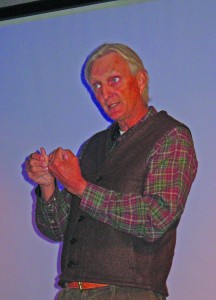 by Sanne Kure-Jensen
Dr. Frank Drummond, Entomology professor at the University of Maine, spoke on the role of native pollinators, honeybees and bumblebees in pollinating blueberries. Each of these insects offers ecologically- and economically-important services. Dr. Drummond presented “A wild, wild world of pollination Downeast: Renegade bees and loaded pistils” at the 2013 Ledermann Lecture at the University of Rhode Island.

Blueberry Plants
The most common lowbush blueberries grown in Maine are Vaccinium angustifolium, native to northeastern North America. Parentage includes V. pallidum, native to Pennsylvania, and V. boreale, a diminutive variety. Blueberries, along with sheep laurel, leatherleaf, huckleberry and other ground-hugging shrubs, are the natural understory, which dominate after clear-cutting or fire.
Blueberries spread by rhizomes. Patches of lowbush blueberries 20 to 100 meters across can be single plants, genetically identical or clones. 80 percent of blueberries need crosspollination. Less than 20 percent of blueberries are able to self-pollinate. Some varieties are universal pollinators. Like many fruit plants, there are varieties that bloom early and in mid-season. They have adapted with different pollinators for these periods.
Blueberry plants can live 50 to 200 years. For nearly two centuries, ‘wild’ lowbush blueberries have been cultivated in Maine. Summer meant weeding and fertilizing. Winter meant pruning by burning or mowing. This helps lessens self-shading which reduces blooms and fruit yields.

Pollination
Up to 9,000,000 blueberry flowers per acre need pollinating between Mothers Day to Fathers Day. Flowers are viable for about 10 days. Their shape makes it hard for honeybees to fit in the flower.
Bumblebees enter a flower and shake at high frequency or Buzz Pollinate. Their harmonic resonance at “high C” allows blueberry flowers to release their pollen.
Many native pollinators are not effective in blueberries such as hoverflies, blowflies, blackflies, scarab beetles, moths, butterflies or ruby-throated hummingbirds. Fortunately, there are 257 species of native bees in Maine. Their population numbers vary considerable year to year and field to field.
Blueberry growers bring in or manage 72,000 colonies of honeybees and 2,500 commercial bumblebee colonies with 12 species of native bumblebees. There are as many as 73 species of effective native pollinators for lowbush blueberries.
More bees visiting each flower mean better pollination, which means more seeds as well as larger and sweeter berries. Each blueberry flower has 30 to 70 ovules or potential seeds. Flowers need at least 14 pollen granules for viable pollination. Different pollinators deliver different amounts and quality of pollen.

Bumblebees or Honeybees
These managed pollinators operate differently and offer their own efficiencies.
Bumblebees typically deliver 20 to 25 pollen grains per flower visit. They work longer hours — nearly sunup to sundown. Bumblebees work up to three hours before returning to their hives moving quickly between flowers. Bumblebees buzz pollination allows more pollen to fall free of flowers making it available for bumblebees and other pollinators who follow.
Bumblebees usually only go short distances between flowers or working a single branch before moving on. This means much of the pollen they deliver is from the same plant and therefore, not genetically diverse enough to pollinate blueberries.
Honeybees work from about 9 a.m. to 4:30 p.m. on days over 50 degrees F. They work just five minutes before returning to their hives to deliver collected nectar and pollen. Honeybees need to make at least three visits per flower to deliver as much pollen as a bumblebee. Honeybees spend longer at each flower. They tend to travel in random patterns, bouncing to other branches or plants.
Because beekeepers follow fruit crop pollination seasons, their traveling honeybees are often “filthy with diseases and pests” said Dr. Drummond. These often spread to local native bees and bumblebees when honeybees visit the same flowers.
Honeybees are twice as effective when they follow bumblebees as their bodies collect the pollen loosened by bumblebees’ buzz pollination.
Managed and native bees are an important part of fruit production. Field layout, plant genetic diversity and available insect pollinators all influence fruit set, yield and quality.
Learn more
For in depth information on honeybee pollination of blueberries, see the University of Maine’s factsheet at http://bit.ly/BlueberryPollination. You can also email Dr. Frank Drummond, professor of Insect Ecology and Insect Pest Management, at frank.drummond@umit.maine.edu, call 207-581-2989 or write him at 305 Deering Hall, School of Biology and Ecology, University of Maine, Orono, ME 04469-5751.