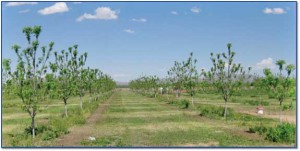 by Karl H. Kazaks
With 2015 being the International Year of Soils, a lot of attention has been paid to the soil health of our country’s agricultural systems. While much attention has been put toward cropland and pasture, the same concern can, and ought to, be applied to orchards and groves.

Recently NRCS hosted a webinar in which New Mexico’s NRCS state agronomist Rudy Garcia spoke about how a heightened concern for soil health has led to modified practices in some of his state’s pecan and fruit orchards.
“If you want healthy and productive trees,” Garcia said, “you have to have healthy soil.”
To that end, a soil heath management roadmap can be used to guide decision-making in orchards, using the same kind of planning principles used when focusing on soil health in pasture and cropland.
Specifically, you can build soil health in orchards by promoting crop diversity and living roots, covering the soil and minimizing disturbance. By attending to these principles, you can restore soil health function, including the ability of soil to cycle nutrients, retain water, maintain physical form and stability, provide buffering and sustain and encourage biodiversity.
One soil improvement practice Garcia suggested is building soil carbon through cover crops and the application of compost. Building carbon fuels the soil food web, promotes biodiversity and optimal soil structure and reduces compaction.
By building a healthy soil food web, farmers can find that their reliance on applied nutrients will decrease.
“As soil organic matter increases,” Garcia said, “soil health increases” and the soil starts becoming a source of nutrients. “You’re going to use less fertilizer.”
Maintaining the soil food web means managing all the factors which affect it, including temperature and moisture.
Once again, cover crops are an effective management tool. In New Mexico, Garcia has found that there is a 20°F difference in soil temperature between bare and covered soil. What’s more, soil with cover is able to retain moisture at full capacity, increasing water use efficiency – something of particular import in drought-stricken areas.
“We want water to leave the soil through transpiration,” through orchard trees and ground cover, “not evaporation,” Garcia said.
For every one percent you increase soil organic matter, Garcia said, you increase the water-holding capacity of the soil by 20,000 to 25,000 gallons per acre.
Garcia gave the example of a particular pecan growing operation in his state that adopted practices to benefit soil health. The orchard covers some 2,000 acres and a variety of soil types.
The most difficult type of soil on which to improve soil health, Garcia said, is coarse, sandy soils, because of their poor water-holding capacity. The second most difficult is clay soils, because of their poor infiltration.
The orchard switched from flood to targeted irrigation, installing subsurface and micro-drip irrigation. Compost was applied and cover crops were established and managed, with regular mowing to mimic grazing.
The result was a high-quality yield of about 3,200 pounds of pecans per acre, with a reduction of applied nitrogen and phosphorus. Soil health has also visibly improved.
Each locality necessarily has its own specific practices for building soil health and its own specific responses to those practices. But orchards all over the country can benefit, Garcia suggested, by considering principles of soil health and adopting a soil health management perspective when developing long-term orchard management strategies.
For more information on how to view your orchard in the light of soil health, consult your local extension agent.