When the 2014 Farm Bill allowed states to initiate hemp research programs, there was widespread optimism that restrictions would be lifted nationwide. An amendment to the 2018 Farm Bill did just that. Hemp research blossomed, growers started growing, and in late 2019, the first Pennsylvania Hemp Summit took place in Lancaster, PA. 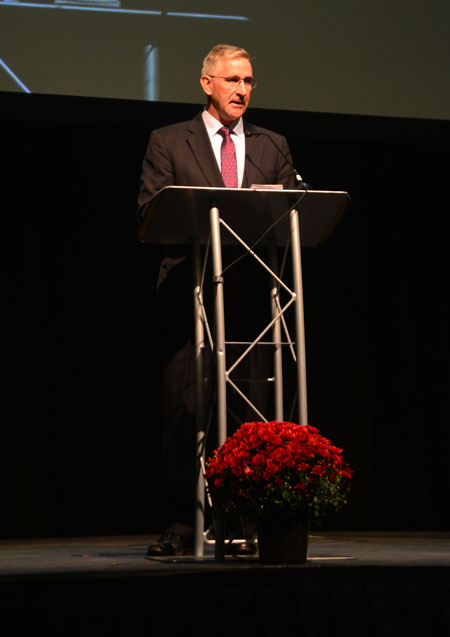 PA Secretary of Agriculture Russell Redding has been a strong advocate of the hemp industry in Pennsylvania.
Photos by Joan Kark-Wren

Pennsylvania Secretary of Agriculture Russell Redding has been a strong advocate of the hemp industry in Pennsylvania, and under his guidance, the 2019 program has grown from 500 acres to 5,000 acres.

“Together, we are building a new industry,” said Redding, speaking to a sold-out crowd. “It’s an old crop in a new era. We are well aware that it’s rare to reset the terms of a crop, particularly one that’s been critical to American agriculture and American industries. We get a chance to do that with the hemp plant.”

Redding said the goal from the start was to take full advantage of the opportunity initiated by Congress in 2014 that allowed the reintroduction of hemp. Growing hemp in Pennsylvania and other states began with research and exploring the basic agronomics of the crop including planting dates, seeding rates, germination, genetics, disease and pest vulnerability, weed control, harvest technique and product development.

“Hemp is a transformative crop, both for people and an industry,” said Redding. “How do we ensure the farmer remains at the center of hemp opportunity while supply chain and products are developed?” Redding suggested current and potential hemp growers take full advantage of existing market opportunities including fiber, oil, feed and seed as CBD oil production undergoes further development.

Redding said that for the hemp industry to grow, remain competitive and be of high quality, it requires transparency and integrity in the marketplace. “What will the USDA guidelines look like?” he said. “When will the FDA provide guidance to the industry about the use of CBD in food and medical products? These issues will form the basis of whether this industry thrives or not.”

In addition to keynote presentations by leaders in the hemp industry, attendees selected smaller group sessions from three tracks, each focusing on a different aspect of production.

Packed seminars show the level of interest attend had in learning more about growing hemp.

The Cannabis genus is the same, and Cannabis sativa is the species used for industrial hemp as well as grain. For recreational and medical marijuana, the species might be C. indica. “Just like corn or apples are bred for different purposes, this plant is also bred to serve different purposes,” said Collins. “We might want it taller, or to have certain chemicals or levels of chemical.”

Some farmers are growing hemp without having a buyer lined up prior to planting, which can be a risky undertaking. Collins said there’s a scramble to put in extractors, fiber processing units or equipment to press for oil, but nothing is firm yet. “People who are putting in processing plants will service people they have contracts with first; then, if they have additional capacity, they will probably open up to non-contract holders,” she said. “But that means you have to think about storage and drying so you can hold the crop until they [the processor] are ready.”

A lunchtime session included a live video presentation by Mark Reinders, CEO of Hempflax (Netherlands) and president of the European Industrial Hemp Association. Reinders explained that prior to Prohibition, hemp growers didn’t have the advantage of technology, so there’s a large gap to make up. While Reinders is enthusiastic about hemp, he cautioned that growing, cultivating, harvesting and selling hemp isn’t as easy as it might seem. “We have to overcome 50 years of the industrial revolution in a short time,” he said. 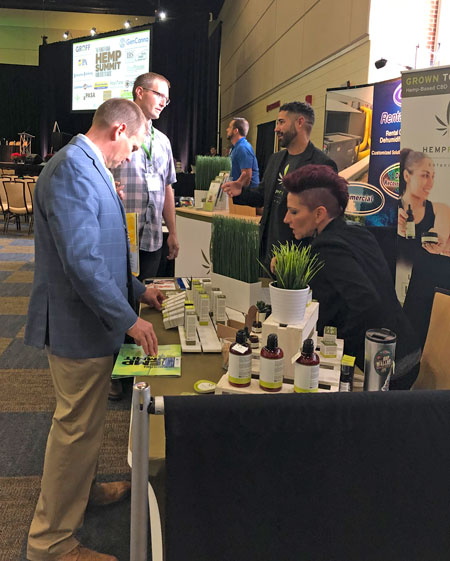 In addition to listening to the speakers attendees had a chance to visit with exhibitors.

One of the early challenges for hemp growers in the Netherlands was harvest, and that aspect of production continues to be a challenge today. Modifying existing machinery is one answer to the harvest issue. “We allowed it to dry for processing,” said Reinders. “We believe quality starts in the field, not in the factory. If you don’t do it right in the field, it doesn’t matter how much money you spend on the rest of the process.”

Hemp growers should be aware that hemp is one raw material with many end products, and there are numerous varieties being grown for a variety of purposes. Reinders said that to date, 600 hemp genotypes have been identified, each with unique characteristics.

Reinders outlined some uses for hemp, including industrial applications. He explained an injection process that has proven useful in the auto industry. “A door panel reinforced with hemp fiber has 30% lower weight,” he said. “There is also improved safety because of high shock impact.” Hemp is also useful in the construction industry for insulation and pre-fab roofs and walls.

There’s significant potential for hemp in the horticultural industry, including use as a growing medium, mulch layer and tree discs. “Hemp fiber absorbs water better than cellulose or synthetic fiber,” said Reinders. “It retains the moisture all the way from the growing operation to the retailer.” Animal care uses for hemp products include bedding for large and small animals, and hemp seed cultivars are being grown and tested for oil. Reinders has seen big interest in nutraceuticals, which include bulk raw material, oil, protein, CBD extracts and premixes.

As research institutions and individuals continue to refine the growing process, develop cultivars and research all other aspects of hemp production, Reinders predicts that additional hemp products will be developed. “Supply will pressure pricing,” he said. “We need a total crop approach, and it will only work if there is a supply chain in place.”