As the farming practices Walt Johnson implemented have changed over the years, so has the equipment he’s using. 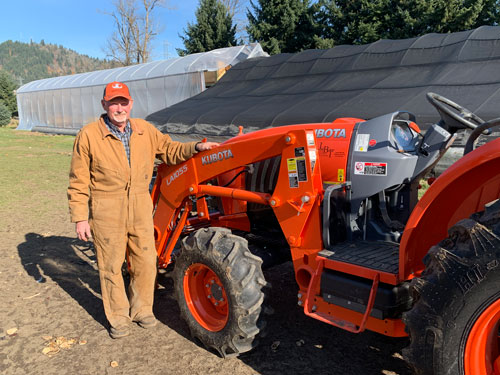 Walt Johnson has run Johnson Farms since 1978. As the farm has transitioned into non-spray and greener farming practices, Johnson has had to invest in newer equipment.
Photo by Aliya Hall

“We’re making new investments,” he said. “The crops aren’t changing but how we want to grow them is changing. A lot of the emphasis has been more and more interest in no-spray and organic production.”

That’s why for 2020, Johnson Farms in Eugene, OR, has purchased new equipment that he’s hoping will help produce a better quality of produce as well as benefit the soil. The most crucial of that equipment is a bed shaper, with biodegradable plasticultures. In one pass, the machine will shape beds and cover them in plasticulture and drip tape. Then he’ll go over them with a water wheel planter that will give the beds a starter solution for the plants.

“It’ll give us some weed control and heat build-up for root system development in the early part of the season,” he explained.

For the 15 years previously, Johnson said he used a weed barrier landscape cloth, but “as we’ve progressed through time, what we used to buy doesn’t work with what we’d like to do in the future.” He also had challenges last year with his pumpkin seeds not germinating or seeds being consumed by pigeons, but with the new planter’s adjustments to different crop types, he said he should be able to overcome that hurdle.

Johnson added that he also hopes the new planter will help him in a strawberry experiment. Plasticultures are not common when planting strawberries in Oregon, and he wants to use that along with the knowledge he’s garnered about clipping strawberry runners to produce a larger strawberry variety.

“I have one that would be absolutely amazing,” he said. “I’m hoping the combination with the propagation and drip system may be able to make that work.”

Beyond this new piece of equipment, Johnson has also built his own hay wagons over the years. He uses parts he bought from junkyards and has designed four wagons that the farm uses to transport guests to their pumpkin patch.

“It’s been really essential to our October success,” he said. “It has been working well for 19 years.”

As the agritainment features have grown, Johnson has also been able to sideline some of his old tractors to invest in newer ones. His youngest tractor before three years ago was 42, and he compared the advancement of tractors to that of cars – less mechanical and more driven by computer technology.

Johnson Farms was started in 1915 by Johnson’s grandparents. He took over the farm in 1978 and expanded its production to include mint, wheat, sugar beets, berries and additional crops for the Eugene Fruit Growers Association. Along with value-added items like jams, syrups and blackberry honey, the farm’s specialty is its frozen berries. The farm is open year-round, and is one of the oldest family-owned agricultural farms in the region.

He said it’s been interesting to watch the development of equipment over the years, as the intricacies have evolved, but those developments have put farmers in a unique position. “The machine size has increased to allow an operator to accomplish more, but in order to pay for that, he has to have more acreage,” he explained. “This whole thing of equipment in the farming sphere is a dog chasing its tail.”

He added that one day he would like to have a nut cracker, sheller and processor, but with every machine he has to justify the worth of it.

Every decision Johnson makes about equipment requires some “soul searching,” but with this new purchase he realized that equipment is “an essential part” of trying to improve his farm.

“Equipment and how we utilize it has affected our bottom line in such a way that we’ve found a way to adapt to the increased cost of labor and seed,” he said. “It’ll be interesting to see the response of the plants to a new growing system. I’m curious to see what will happen with that.”