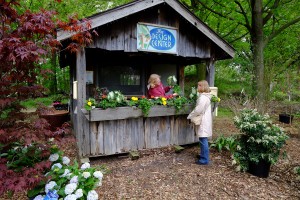 by Kelly Gates
When World War II ended, Jim Jonker’s father returned to Holland, MI and began peddling produce. He drove up and down the streets in a pickup truck, selling just enough to help support his family.
Eventually, his wife set up a produce stand at their home. The stationary outlet made more money than Jonker’s door-to-door efforts, so the couple constructed a sales building where they could open a full-fledged fruit and vegetable operation lasting into the early 1960s.

“They sold some trees, shrubs and vegetable plant starts, too, so in the ‘60s, when supermarkets started coming into existence, it made sense to phase out food and focus solely on selling plant material,” said Jim Jonker, current co-owner of Jonker’s Garden. “My father was able to obtain some old, large window frames from a demolished General Motors factory and he turned them into a custom greenhouse, which we still have and use today.”
Other structures have been added to the property over the years — almost one per year over the course of two decades. The structures are used for both indoor growing space and retail display space.
“I still remember digging up mature, blooming perennials from out back for customers when I was a kid. People used to buy them for $.75 each,” Jim told Country Folks Grower. “My dad would also order in plants, like the truckloads of arborvitae he used to drive down to Alabama to pick up from suppliers.”
In the early ‘60s John built a miniature golf course and named it “Nuttin’ but Puttin’.’” The pitch-and-putt miniature golf business did well for many years and was the perfect place for them to showcase the plant material sold at the garden center. They decided in the ‘70s to build a nine-hole pitch-and-putt gold course called “Gofer Golf,” named after the predominant varmint of the grounds.
But their main focus was always on selling plants. When extra space was needed for greenhouses, the golf-centric side-businesses went by the wayside in lieu of new construction.
“My brother built one new greenhouse each year for 12 years, using the land that previously housed the golf course,” explained Jonker. “Those 12 greenhouses are still being used. We grow a lot of what we sell here, but the demand for plant material is so great, we still can’t grow everything on site.”
Jim and his son, Dirk, currently own and manage the garden center together. Along with the help of their staff, the duo grows much of their own annuals and perennials in house. They also order in additional annuals, perennials, plus shrubs, trees and other nursery stock.
“We’re actually smaller than most greenhouses around, but we carry a lot of unique items. We have nearly 1,000 varieties of perennials, a large selection of roses and unusual conifers from Oregon,” said Dirk. “Here in western Michigan, we have a lot of suppliers at our fingertips, so we focus on growing plants they don’t produce in order to distinguish ourselves from other garden centers and big box stores.”
Because Holland is a resort town, the garden center has two busy seasons back-to-back. The first begins in May when locals descend on the place to purchase plants. Then, in early summer, people with second homes in the area arrive to buy for their residences.
Perennial and water garden sales typically continue through September, at which point the company starts marketing spring flowering bulbs, mums and other fall plants. Perennials are planted in late summer and fall for the following spring, too. The Christmas season picks up soon thereafter.
“We sell wreaths, greens and live potted trees,” said Jim. “We also do much of the exterior Christmas decorations for downtown Holland, including pots and garland.”
After the holidays, the staff takes a brief break before beginning a new crop of mandevillas and all sorts of other annuals.
According to Dirk, managing the growing and retail aspects of the business requires a team effort. The staff has also worked hard making changes to the business over time in order to meet the ever-altering demands of its customers.
In recent years, Jonker’s Garden formulated a social media marketing campaign to reach shoppers more directly. An email list was also created to keep customers informed of product arrivals and special offers. Presently, the email list is over 3,000 members strong.
In the near future, the Jonkers will be adding a new indoor retail space to help protect products from inclement weather.
“We are predominantly an outdoor garden center, with most plant material stored outside. But, while we like to sell plants that are already hardened off to the elements, it would be nice to have a roof overhead when needed,” he noted. “For this reason, we will be adding a new retail greenhouse with a roof that can be opened and closed.”
When the new building is in place, Jonker’s Garden will be able to better manage its inventory, particularly during unusually cold springs like this year, he added.