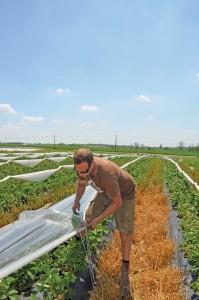 On an unusually hot spring afternoon, Brent Barnhart was working on a reducing the size of a corn planter so it would be more suitable for his needs. Barnhart is a young farmer who started farming in 2007, but is already seeing some of his some ambitious ideas come to fruition. He’s creating a produce farm near Chambersburg, PA, on land surrounded by dairy farms, corn fields and a few other produce farms.
“This farm was my grandfather’s,” said Barnhart. “But it wasn’t a working farm – it was leased to the neighbor who had a dairy farm. There’s a creek and about 50 acres, so the only thing I could do with it is grow produce.”
Barnhart started his produce operation with field-grown tomatoes for a major packer. At the same time, he had a small vegetable patch on plastic and a fruit stand. His first equipment was worn and outdated tractors and implements that were already on the farm, but he has since started to replace those with newer equipment. Barnhart says that although he was moderately successful with contracting tomatoes, he wanted to move his young business in a different direction.

“It gave me the guts to not be afraid to lose everything,” said Barnhart of his five-year experience with field-grown tomatoes. “I did lose a lot and there’s still debt to be paid from those years, but now, I’m not afraid to put it out there because I know I can work through it.” Barnhart added that the experience also drove him to seek additional ground to rent because field tomatoes must be grown in a three-year rotation.

Barnhart has since purchased an additional farm, and now owns 80 acres. He has also secured an additional 200 acres to rent, which he uses to grow field crops. “Growing tomatoes made me want to seek other land,” he said. “It also improved the cash flow, and the bank likes that.”

Now that he’s no longer a contract grower for tomatoes, Barnhart is concentrating on his original concept for the farm: U-pick strawberries, U-pick pumpkin patch, a corn maze and an on-farm fruit and vegetable stand. Barnhart says that since he started farming, he has had good and bad years, but overall, those years averaged out and he’s willing to keep going.

The Country Creek Produce season begins with U-pick strawberries. Strawberries are planted in August on plastic and fertigated with a 20-20-20 blend along with some straight nitrogen to get them started. Barnhart has 50,000 strawberry plants, some on white plastic (to keep plants cooler for delayed ripening), some on black plastic and some with low tunnel covers. All strawberries are irrigated with a double drip system at a .25 emitter with 12 inch spacing. Water source is a nearby major creek and is sent through irrigation mains that run throughout the farm.

“They would normally be covered from December through January,” said Barnhart, explaining the Dubois clear, perforated low tunnel covers. “But we didn’t cover them right away this past year because we were doing an irrigation project and the covers would be in the way. We covered them in late February/early March – the plants had lost leaves, but when we took the covers off, there were beautiful plants.”

The Dubois row cover system includes hoops over the rows and ventilated plastic that is pulled over the plants and secured with bungee cords to encourage new growth and protect from frost damage. “The covers can increase temperature inside by 25 degrees,” said Barnhart. “The only potential issue is sufficient pollination.”

The goal of purchasing the row cover system was to have strawberries ready for the on-farm fruit stand prior to Memorial Day; ideally, the week before. “If I can get some out there early, people will know that we have them,” said Barnhart. “Then by the time the rest are ripe, we’ll have a lot more customers.”

Barnhart plants grass between the strawberry rows to hold the soil in place, then burns it down with an herbicide in spring. Right before the U-pick season starts, he runs over the grass with a tractor, which results in a clean, dry walking surface for customers.

Country Creek Produce just completed an NRCS project to supply irrigation to the entire farm. Other than the excavation work required for laying 6,000 feet of pipe, Barnhart and his crew did all of the work themselves.

The high tunnels on the farm serve several purposes: starting vegetables, growing early season tomatoes, and after the growing season, one tunnel becomes a covered play area for young children visiting the farm for fall activities. Barnhart admits it’s a lot of work to put greenhouse-started seedlings such as beets, green beans and corn into the ground, but it’s worth it to have early produce. “We usually have corn by June 25,” he said. “We planted Extra Tender, Delectable, Silver King, Peaches and Cream and Incredible.”

In the tomato tunnel, which was another NRCS project, Barnhart uses billboard vinyl on the floor. The vinyl is heavier than traditional floor cover and is effective for weed control. Spent mushroom soil adds fertility, and drip tape to every row ensures ample water. By discarding the billboard vinyl and disinfecting stakes, Barnhart has been able to grow tomatoes in same greenhouse for four years. Barnhart has found that it’s cost-effective to purchase young transplants. “It doesn’t really pay for us to start them ourselves,” he said. “The greenhouses are too big to heat for the small number of trays.”

Barnhart says the ideal tomato for his market is large, attractive and tastes good. Rather than growing numerous varieties, Barnhart sticks with just a few that he knows will do well such as Fabulous, Celebrity and Scarlet Red.

“After the tomatoes are done bearing, I pull the stakes and put fresh cover down to create a play area for the U-pick pumpkin and corn maze customers,” said Barnhart. “I used to use the high tunnels to grow fall produce but found that they serve a better purpose as a play area.”

Barnhart’s parents Karen and Jim help on the farm, and a Hispanic crew and a lot of friends help manage the workload throughout the season. Barnhart’s fiancé Jennifer Neiderer helps with the pumpkin patch, farm stand and handles the marketing for the farm.