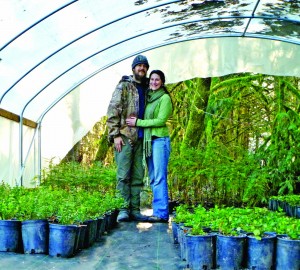 by Karl H. Kazaks
LOW PASS, OR — Growing containerized trees and plants organically does require more labor, Ryan Chamberlain admitted. “I have to feed multiple times,” he said. “I can’t use a 12-month chemical.”
But keeping their mostly-wholesale nursery organic is part and parcel of Karma’s Forest primary emphasis, which is to grow trees, shrubs, sedges, rushes and grasses native to Oregon’s diverse ecosystems. The nursery’s main customers are agencies and groups that are working to restore landscapes and wildlife habitat, including along waterways.
These entities include the U.S. Forest Service, local soil and water conservation districts, land trusts, and watershed councils. Those groups’ restoration projects require large quantities of native species. Karma’s Forest is an important supplier to those groups. In fact, Chamberlain not only grows the trees and plants but usually helps oversee the planting of them, too. Larger projects have involved planting upwards of 10,000 trees in one day.
Because his nursery stock is being used in restoration projects, Chamberlain thinks using organically-grown trees and shrubs only makes sense. His nursery uses no chemical fertilizers, pesticides, or fungicides.
Even if Chamberlain had a different set of customers, his commitment to organic production and sustainability would remain. In fact, Karma’s Forest is building a new market, selling retail to local landowners. So far that accounts for only about 10 percent of their business, but that figure is growing.
“What we’re trying to do is minimize inputs,” Chamberlain said. His goal is to show that “you can grow a healthy plant — with a more robust root system” by feeding with organic fertilizer, compost and mycorrhizae.
Depending on the species, Chamberlain will top dress one to three times per season. Early in his career as a nursery owner, Chamberlain would apply just the organic fertilizer (which for a time he mixed himself, until he decided it was too time-consuming).
“It was a mess,” he said. The organics would attract swarms of bees and flies. Since then he has learned to mix the fertilizer with compost.
The compost, he said, “kind of keeps everything in check. It helps break everything down.”
In addition to compost, Chamberlain may also put down lime if need and reinoculate with mycorrhiaze when fertilizing.
Because Karma’s Forest supplies so many watershed restoration projects, it grows large numbers of riparian tree species each year, including black cottonwood, Oregon ash and big leaf maple. The ash and maple Chamberlain grows from seed. Cottonwoods he grows more from cuttings, because “when the seed’s flowing,” he’s often too busy to collect it.
Karma’s Forest also grows several willows, as well as species typically found further from the upper reaches of a stream bank — including ninebark, creek dogwood, black twinberry and Douglas spirea.
“In some sites with a lot of elk you do get some heavy browse,” Chamberlain said. “Beavers are a heavy culprit too.”
Chamberlain likes growing for the different biomes in Oregon — from the coastal communities to the Willamette Valley to central and eastern Oregon. He has sold to projects as far south as Klamath Falls and as far north as Snoqualmie Pass in Washington.
Karma’s Forest doesn’t spray for insects. That’s partly because the native plants they grow have resistance to endemic bugs, but also because of their guiding philosophy.
The goal, Chamberlain said, is a nursery ecology where everything is in balance. He has previously introduced beneficial ladybugs but as that population has developed he hasn’t had to introduce any for several years. He would like to add another beneficial to target fungus gnats, he said, “but as of now they don’t have detrimental effects. They flush and they’re gone.”
As part of its commitment to sustainability, the nursery reuses containers. Some have been used four times. When they degrade they are recycled. At present the nursery grows entirely in containers, but Chamberlain is getting ready to start producing from beds, bulbs as well as bare roots trees and shrubs, as the demand for bare roots as a cost-effective option in restoration projects is growing.
As efforts to restore waterways and watersheds matures, Chamberlain sees more attention shifting to restoring prairie ecosystems, so he foresees a future where he is growing more sedges, rushes and bulrushes.
Sustainability at Karma’s Forest extends to irrigation. Even though his area, about 30 minutes west of Eugene, has abundant groundwater, Chamberlain said, “I don’t want to be wasting water. I feel like it leaches fertilizer out of pots.”
The largest tarps he waters with impact sprinklers, but he also this past year tried using MP rotators, which spray out streams of different lengths and can cover a 40 x 40 ft. area.
“I feel like I’m using less water and getting the same results,” with MP rotators, Chamberlain said. He did caution that MP rotators can be affected by heavy wind. In those cases, he advises watering earlier in the day.
As the demand for Chamberlain’s products evolves, so too will his nursery — such as his move to growing bare roots.
But his determination to grow organically — regardless of the extra time and labor involved — will not wane.