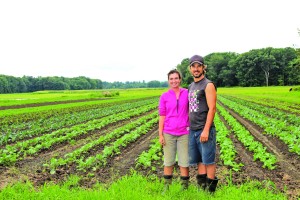 by Laura Rodley
Less than a mile from the bustling think tank of the University of Massachusetts lies 47 acres of fertile riverbottom land that comprises King Creek/Queen’s Greens, owned by Matthew Biskup and his partner, Danya Teitelbaum. Teitelbaum started her business, Queen’s Greens, as a winter green growing operation in 2010. She met Biskup at a farming workshop in January 2009.
Biskup already had a thriving full-time business — raising hormone-free, grass-fed beef from a herd of 20 shorthorn cattle — known as King Creek. They combined their enterprises as King Creek/Queen’s Greens, situated in Ware, MA.
Teitelbaum rented and borrowed land to plant on wherever she could, mainly in Hadley. She also worked at other farms and at UMass extension service. In 2012 she found and started using the land they now farm on Russellville Road in Amherst, MA. In October 2013, they finalized the purchase of the land in Amherst, and are currently harvesting vegetables from nine acres of row crops planted this April — minus the cattle.
“We would sell both meat and greens at farmers markets. We just eliminated the cattle,” said Biskup.
It was all a matter of geography. They had moved to a new piece of property that was very good for growing vegetables, but a little soft for a herd of cows. They found it much more profitable to grow vegetables, all herbicide-free and organic, but not certified organic. They are assisted by a few part-time employees.
Biskup and Teitelbaum concentrate not only on growing vegetables, but specialize in growing salad mixes of kale, Swiss chard and cabbage, plus a lot of typical summertime standbys like eggplant, pepper, tomatoes and turnips. They have also harvested hay and balage, and wrapped fermented bales — 60 so far — with more to go.
They have planted outdoors into September and have plantings in unheated hoop houses, one 160 feet long, another that is 220 feet long, and a couple that are 100 feet long. They also use temporary low tunnels during winter.
“Growing vegetables is a lot harder than raising cows,” said Biskup.
“We’re working on it. Last winter when it was really cold, we suffered a lot of cold damage.” The year before was a warm winter, with early crops. He said he’s learned to “be flexible, deal with whatever Mother Nature is throwing at you.”
Listed on the Community Involved in Sustainable Agriculture (CISA) website, they supply farmers markets and stores such as Greenfield’s Market in Greenfield, and River Valley Market in Northampton. A truck goes once a week to Boston filled with CSA orders, and a wholesaler from New York picks up orders.
Is it going well? “It is until it gets flooded, we just got about five inches of rain. Typically fertile, no stones, work is easy, easy on the equipment basically,” answered Biskup.
Besides the gold mine of fertile land, he has found a gold mine in the number of neighboring farmers who are around, “if we need a helping hand, piece of equipment, advice. [There is] a lot of knowledge, a lot of sharing of information. If you need to know something, typically they tell you what they did last year, 30 years ago, 80 years ago.”
He said, “It’s different than we expected, or had planned. It’s meeting all our expectations so far.”
Biskup and Teitelbaum are first-generation farmers, although Biskup’s father dabbled a little in farming.
“Like most people round the world, someone in the family has done farming. My family still farms in Poland,” he said proudly.