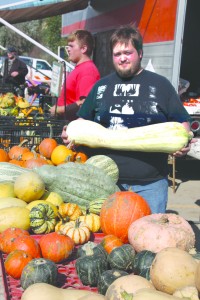 by Bill and Mary Weaver
Larry Sherer, who has been growing vegetables and vine crops for 36 years on the rich, deep soil of his farm in Wakefield, NE, is a surprisingly “young” 78-year-old.
His only concession to advancing age has been to cut his produce acreage this year from 30 to 20 acres, and he needs every bit of that to supply three restaurants, the customers who buy at his farm and the three farmers markets he personally attends each week, including two different markets in Sioux City, Iowa, and one in Wayne, NE. He is also still able to put in long hours working in the fields.
At the farmers markets, Larry’s produce sells well. “We have enough acreage that we can price for volume sales,” he explained, “and that has made us a lot of loyal customers. Anyone coming to the market who does home canning comes to our stand.”
Specialty items also draw customers. “We grow a lot of different kinds of watermelons, including the white-fleshed ‘Queen of Saskatchewan’, which is a very sweet melon, although it must be handled carefully because the variety cracks easily. I’ve never had one of these white-fleshed melons come back.”
Another popular item is their orange-fleshed watermelons. A grandson, helping to wait on the crowd of customers at their busy market stand advised a customer, “The orange-fleshed are the best watermelons we have.”
Sherer’s wife Karen ordered seed for 30 different kinds of watermelons last year, including “a lot of heirloom ones that we never heard of before.” This year they planted the 25 varieties they liked best. “Customers like to have a lot of choices.”
Sherer’s Country Gardens has a policy of replacing watermelons if customers are unhappy with the flavor, but Larry has become so skilled in gauging ripeness that over their many years at the farmers markets, “I don’t believe we’ve replaced more than half a dozen.”
However, while we were there, a lady brought a melon she had already cut back for replacement. “The ‘Black Diamond’ variety,” explained Larry, “now comes with both red or yellow flesh, and we must have gotten the two colors mixed on the pallet when we brought them to the market.” The lady’s husband wanted a red melon, and the one she had bought was yellow-fleshed. He had refused to taste it.
So according to his policy, Larry exchanged the melon for her. But mix-ups like this are rare. Sherer’s son actually drew a detailed map in a notebook showing where in their 5-acre patch each of their watermelon varieties was planted for ease of harvesting and, if necessary, of replanting.
Samples are not permitted at Nebraska farmers markets, according to Sherer.
Larry’s grandsons and granddaughter have learned to be excellent salespersons, supplying customers with needed information, another likely reason his stand is so popular.
Grandson Drew, when asked how long a butternut squash would keep, gave the customer the useful information, “Don’t scrub it when you get it home. You’ll scrub off the waxy layer on the skin that helps it to store better. Unwashed and in a cool place, it should keep for several months.” Today’s consumers appreciate, and benefit from, such information.
Sherer Country Garden’s stand at the Sioux City, Iowa market is quite large, necessary for the volume of produce they move on a market day. “We rent space for 10 tables that are six feet long. That space cost me $1,175 for the season.” This is by far their most expensive market.
Larry drives the 35 miles from his home to the Sioux City Farmers Market in a 1973 truck that was owned by U-Haul before he purchased it. It has served him well for 22 years.
He had one side of the truck fitted with a fold-out awning, so he can drive into the market pulling his trailer of produce behind him, then open the awning, and have some instant shade.
Sherer Country Gardens will grow ethnic items requested by customers. Their huge Cushaw squash are a favorite with Mexican customers. We overheard Sherer’s grandsons advising a customer that these squash give you a lot for your money, with their long necks and relatively small seed cavities, the kind of good advice that will bring satisfied customers back to their stand for more.
Larry also grows two varieties of green okra, “which southern customers will fight over,” and a lot of tomatillos, also in demand by Mexican customers. “It takes forever to pick a bushel, so we charge $3 a pound, and I sell them all. You have to consider the amount of labor when you set prices.” A variety of herbs, from plants started in their greenhouse by wife Karen, also sell well, as do large sandwich radishes, which are not widely available.
In the fall, winter squash in many types fill a third of Larry’s table space. “We’ve sold two-thirds of our winter squash. The only one we have left in quantity is Butternut squash.”
Last year the Sioux City market was unexpectedly closed down early because of the cold weather, and Sherer had to send three truckloads of produce to the food bank, so he planted lighter on winter squash this year.
Heirloom tomatoes are not in demand at his markets. “My customers like the smooth, evenly colored hybrid varieties.” As with their other vegetables, Larry’s customers have lots of choices. The operation supplies red, yellow and golden tomatoes in a wide variety of types — 2,600 plants in all.