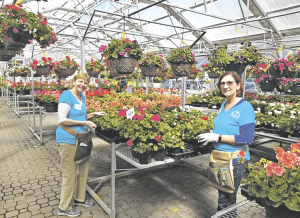 Josh Smith didn’t intend to become an owner in a thriving greenhouse business, but a series of life events landed him there. Josh’s stepfather, Gordy Kopke, started Kopke’s Greenhouse in Oregon, WI, after successfully selling field grown vegetables at a farmers market in the early 1980s.

“He grew vegetables like peppers, tomatoes, squash and melons, loaded them into a truck and sold them a farmers market,” said Josh. “The idea was to provide really good produce at reasonable prices. If he broke even, it was a good day.”

The business grew after Gordy’s mom Lorraine asked him to grow a few flats of flowers and some hanging baskets, thinking people might like them. Gordy honored her request and was amazed at the response. It didn’t take Gordy long to realize he was making a decent profit on flowers.

Josh’s mom Anna entered Gordy’s life, bringing Josh and his brother. “We picked thousands of melons and peppers as kids,” said Josh. “But I was a rotten kid and left home at 18.” Josh spent time managing a retail store, entered the world of IT and business management, and at the same time he was a touring musician – all with no intention of returning home.

About 11 years ago, Gordy contacted Josh to ask if he was interested in coming back to the farm. Although Josh was enjoying success in IT, he decided to give farm life a try. “We decided I could buy the business from him, and we’ve been working on that over the past seven years,” said Josh. “It’s been full-circle and I couldn’t be happier.”

Gordy purchased the farm in the 1970s with a handshake, but Josh said the transition process the family is currently working through is being handled with professional help. The family established a six-year timeline for the transition, which includes the option for Josh to acquire outstanding interests in the company. “They know too much for me to say ‘Retire and go have fun,’ for me to kick them out of the business,” said Josh, describing his parents. “There’s so much I need to learn from them – they have insight and experience that doesn’t come from a book.”

Josh credits Gordy for being an excellent businessman and project manager, which is making the transition smoother. The family has relied on instruction at Cultivate in Columbus, Ohio, to learn more about the fine points of transitioning a business. “We were surprised, but not really surprised, to learn that it’s rare for a business to make it past the first generation,” said Josh. “We had to learn what the pitfalls were. The biggest challenge is separating personal and family from business.” 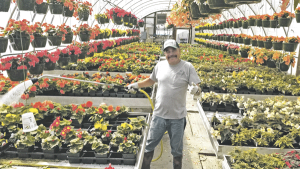 When he first returned, Josh concentrated on learning about and understanding the business. “There’s so much I don’t know about it, and I’m trying to stay humble and find out what I need to know how things happen on the farm,” he said. “I missed out on some of that knowledge and experience because I couldn’t be two places at once. I’m trying to soak up as much as I can, not just about ‘what to do and how to do it’ but why we do it.”

Although there was plenty for Josh to learn when he returned to the farm, he introduced some new ideas, especially the way Kopke’s marketed products. “Having had a foot in both worlds helped me see that,” he said. “There’s a separation in people’s minds between ‘farm’ and ‘city’ people, but they’re all people. People have less space to garden, so it’s been about reconfiguring what we do so we can serve those customers and their needs.”

Kopke’s Greenhouse owes much of its success to paying attention to who comes through the doors and what they want. “They’re female and in their mid-30s and up,” said Josh, describing the average customer. “We’re starting to see a younger generation. Millenials are turning 40, and they’re coming in because we’ve changed our product mix to things that are easier to care for instead of offering just bedding plants.”

Being in the IT world also helped add that perspective to the business. Josh said there’s plenty of IT farmers can use, especially when it comes to defining customers and what they want. “Learn about your customers through social media,” he said. “Learn how to market plants to a first-time home buyer who’s a single mom with one child and a dog. If you spend your time working ‘on’ the business, it helps with that perspective.”

Although Gordy started greenhouse growing with an angled glass roof building and two hoop houses, the family has added growing space to meet demands. “We now have 28 buildings, some gutter connected,” said Josh, adding that his mom runs the seeding and propagation area.

Customer feedback drives decisions about what is grown each year. “We ask our customers what they like, watch to see what they buy and listen to every suggestion,” said Josh. “We keep track of what they want and adjust accordingly. Gordy, my mom, the growers and I make the final growing decisions, but there’s still a degree of instinct involved.”

Orders for the following season are finalized in July and August, and plant material starts arriving in late January and early February. At the same time, staff and crew are preparing buildings for the season. When the first major shipments arrive in March, the team begins planting combination baskets.

Josh said this year’s winter and early spring weather resulted in crop timing challenges. “We try to use water and temperature as growth regulators,” he said. “Low, slow and cold whenever possible, but that’s difficult because we don’t use lights.” Hot water radiators supply heat to seven starting houses, with scrap pallet wood providing fuel for the boiler. 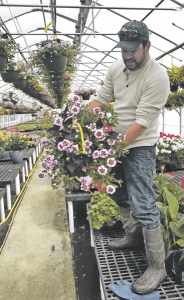 After the spring rush, Kopke’s slows down by the end of June and remains open for a few more weeks. Goods are consolidated as inventory declines. “We dead head everything throughout the seasons so all of it looks nice, sell what remains, and by the end of the season, what’s left we put on a cart and a sign that says ‘Free,’” said Josh. “We grow only what we think we can sell in a worst year of a five-year average, and we don’t dump excess inventory. Once we open, plants sell, and we sell almost everything by the time we close.” Kopke’s offers a limited selection of fall favorites, including mums, purchased from a local grower.

Josh said he’s constantly relating what he learned before returning to what he’s learning about the business now. “One insight I got from living in the outside world then coming back is how bad you can be at business and still survive,” he said. “It’s amazing how many mistakes we can make and still recover as long as there are systems in place to help recover.”