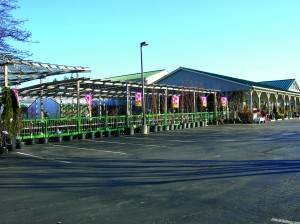 by William McNutt
When Gustav Reiner emigrated from a Germany already at war in 1940, he knew he wanted start his own retail garden and landscape center. He wound up in Columbus, Ohio, where a large German ethnic group had made their home for nearly 100 years, found another recent emigrant named Bertha working as cook and housekeeper in a nearby suburban area, married her and set up a small retail store while doing landscaping on the side. The site of that store is now the 10 acre location of Oakland Nursery, located appropriately enough on Oakland Park Avenue in Northwest Columbus, becoming one of the largest such enterprises in Central Ohio. According to grandson Mark Reiner, marketing manager of Oakland, the soil around this location was about the “worst in the area for growing nursery crop and tree stock,” though it did get accomplished. Mark has just finished his first year on the ONLA board as a member of the membership and retail committees; his father Paul served as president of the association in the early 1980s. Paul and brother John, Gustav Reiner’s sons, currently share chief officer responsibilities. John is head of Landscape services, with son Max managing projects involving irrigation; Paul heads the entire garden enter operation, with four locations now serving central Ohio.
In order to leave the unsuitable soil type on the Oakland Park site, 1000 acres was acquired in the early 1980s near the site of what is now the huge Polaris Mall location in a highly populated (and generally high income) area, in order to provide nursery and tree stock, under the name of Acorn Enterprises. With this particular site now off limits for any agricultural enterprise, the next move for securing nursery stock growing area was to buy 600 acres in Knox County, about 50 miles north of Columbus. Landscaping — including services of design and layout specialists — is responsible for about a quarter of Oakland Nursery income, with the remainder coming from the extensive garden center set up. In addition to the expanded original location in Columbus city limits, a new store was added in Delaware, next county to the north in one of the fastest growing population centers in Ohio, another in Dublin in 2005, next door to Union County in the west, another expanding area. The last center began operating in the New Albany Eastern site, with probably the highest income level in Franklin county, which has come into being over the past 15 years — and not too far from Polaris Mall, where thousands shop every day. In short, long range strategic planning has placed Reiner operated Garden Centers in a near circle around a major city, in areas of higher income home ownership.
Mark Reiner returned to the family business from seven years on Wall St. where he had started a business career after graduating with a finance major from Carnegie-Mellon in Pittsburg. While well-trained in horticulture by father, uncle and grandfather, he wanted business experience in another enterprise before deciding to come back. Career counselors who analyze any family enterprise usually advise such a move for any potential successor, in order to avoid becoming locked into a family enterprise if not completely sure this is the desired end. Mark, now 33, married with two small daughters, told his father when he was ready to return. John’s daughter Genevieve had been a lawyer in Columbus and recently decided to return to the family business, certainly large enough to need their own lawyer, while Mark’s sister Heidi lives in Chicago and is not part of the enterprise. In addition to his Oakland Nursery landscape role, John also serves on the Dublin City Council, a city where one of the nurseries is located. He and his brother were part of the work crew, and in training for a leadership role from the age of 10. John handles landscaping supervision, does estimating and crew assignments, plus interior design plans, having graduated with a design major from Ohio State. He does advanced design for new residential and commercial buildings, including Christmas holiday lighting, plus many other display types.