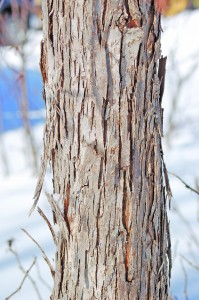 by Bill and Mary Weaver
In a rollicking, fast-paced presentation at iLandscape 2014, Mike Yanny introduced some of his favorite Wisconsin native plants, as well as a “nativar” — an improved selection he made from wild plants. Yanny is the senior horticulturist and former plant propagator at Johnson’s Nursery in Menomonee Falls, WI. Some of his favorite native plants are widely adapted in the East and Midwest. Some plants are also carried by West Coast nurseries.
One of Yanny’s top picks is the musclewood (Carpinus caroliniana), named for its beautiful bark. “I fell in love with this plant in the early ‘80s,” he recalls. “I had noticed that a small percentage (about 10 percent) of the plants in the seedling crops I grew had red fall color. They were beautiful! So I grew about 300 per year for four consecutive years.”
“We only sold about five per year,” he continued. “At that time in my career — I was in my mid-20s — I didn’t really concern myself with the business side of growing plants. Of course, the owner of the company did. He told me to cut back production of the plant and didn’t fire me, which was nice of him.”
But the musclewood adventure wasn’t over.
“With over 1,000 plants to choose from in our fields, I could be very selective about which plants I would pick seeds from, choosing only plants with red fall color. In that way, I increased the percentage of plants with this characteristic in future crops.”
After years of only growing seedlings from red mother plants, the percentage of trees with this beautiful foliage went from 10 percent of the crop to 80 percent. That lead to the selection of superior individuals which could be named and introduced into the marketplace-cultivars.
In recent years a new term has arisen to describe a cultivar or clone of a native plant, and that is “nativar.” Yanny discussed Carpinus caroliniana ‘JN Upright’, Firespire® musclewood as being a nativar he selected from his superior strain of musclewoods. “It has fabulous bright red fall color on a tree with an upright habit that makes it very useful for creating screens or living walls to frame portions of a landscape.”
Another one of Mr. Yanny’s favorite plants is the witchhazel (Hamamelis virginiana). Blooming in October or later, the yellow flowers have long strap-like petals that curl up on freezing nights, then unfurl again when temperatures warm. Witchhazel provides a lot of interest in the fall landscape with its bizarre flowers, yellow fall leaf color and fruits that shoot seeds more than 20 feet. To save the seeds for planting, pick the fruits before they shoot and put them under a screen. The screen catches the seeds.
The pagoda dogwood (Cornus alternifolia) is another beautiful understory tree. The more shade it gets, the more it develops a layered plant form. Its creamy white flowers seem to lie on the top of each layer. In fall, its foliage turns a rich maroon. These trees do best sold as container plants. Balled and burlapped, they really suffer the first year after transplant.
The ironwood (Ostrya virginiana), is an understory tree with handsome light gray bark that exfoliates in 1/2 inch by 3 to 6 inch-long strips. Ironwoods can have a nice, clear yellow fall color. The seeds, if collected too late, can have double dormancy, not germinating for two years. To avoid this, pick the seeds when they are still slightly green. Wear gloves. The fruits have tiny hairs, and can irritate your skin. Ironwood doesn’t do well in poorly oxygenated clay soils — as a street tree, for example.
Stressed under such conditions, ironwood falls prey to borers. But in decent, well-drained soils, it will be borer-free.
The American filbert (Corylus americana) is an 8 to 10-foot shrub with wonderful fall colors and very tasty nuts. This shrub slowly spreads by suckering. To get good pollination and assure a crop of nuts, plant at least five plants.
The black chokeberry (Aronia melanocarpa) has big flower clusters, and produces edible bluish-black berries that are very high in antioxidants. They have become very popular in juice mixtures recently. This native shrub typically grows as a swamp plant in acid soils. You may have some problems growing it well in soils with a high pH.
The New Jersey tea (Ceanothus americanus) is an attractive native shrub. Insects love the flowers. The fruits turn black, then explode. The plant is hardy, but in the upper Midwest, the top dies back most years. Customers need to understand that this is a natural occurrence. In spring, simply cut back the top of the plant and it will dependably regrow and flower each season.
The bitternut hickory (Carya cordiformis) is a native tree with tasty nuts and a beautiful form. Many people look at it and think it’s an elm because of its vase-shaped form. It has a clear yellow fall color and sulphur-yellow terminal buds in winter.
The Amelanchier, or serviceberry, “has beautiful, beautiful flowers, followed by fruits that the birds go nuts over.” It also has attractive smooth light gray bark. The hybrid between the two native species, Amelanchier x grandiflora is the best for landscaping.
Nurserymen need to know that most Amelanchier plants are temperamental on the transplant. “It has one of the sparsest root systems of any tree I’ve ever dealt with.” Yanny has learned to do an extra transplant before selling the tree, so he gets a more fibrous root system.
The leatherwood (Dirca palustris) is another great understory plant. “The Indians used it for making baskets. You can actually tie the branches in knots and they won’t break. Leatherwoods can have wonderful fall colors. The fruits turn chartreuse and drop off. Put a drop cloth under the tree to collect