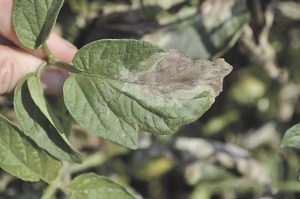 by William and Mary Weaver
Plant pathologists in the U.S. are eager to determine the genotype of each late blight outbreak. The concern is that the population of pathogen that causes late blight might shift as a result of two separate mating types producing oospores as a result of sexual recombination that can overwinter in the soil. This has already happened in Europe where, once a field has had a crop infected with late blight, every year a susceptible crop is grown, the oospores will be at-the-ready to cause new infections.
In the U.S., this has not happened yet, and vigilance in scouting and quick reporting of outbreaks is vital so that the strain and genotype of late blight involved in each can be analyzed.
Dr. Beth Gugino a Penn State Extension plant pathologist explained, “In the U.S., most of the isolates collected from tomato and potato in 2014 and 2015 on the East Coast and upper Midwest were US-23, an A-1 mating type, while in 2009, many outbreaks were due to US-22, an A-2 mating type, and prior to that US-8 was common in potatoes, also an A-2 mating type.
Knowing the genotype of the pathogen that is infecting your tomatoes or potatoes is important for effective treatment. US-23, unlike previous genotypes, is sensitive to the fungicide active ingredient in mefenoxam, one of the few systemics that can stop late blight in its tracks.
This was the case with the first report of late blight in Pennsylvania last year. It was observed in a cull pile and also in a nearby field in Erie County, Pennsylvania. Where late blight resulted from US-23, the grower sprayed with mefenoxam and stopped the outbreak from progressing.
“We haven’t been able to use mefenoxam in the recent past,” explained Gugino, “but with this particular genotype, it is very effective, especially early in the season.”
The July 15, 2015 report associated with the cull pile in Erie County, occurred the latest that late blight has been reported in Pennsylvania since 2012. “Michigan did pretty well this past (2015) year too,” continued Gugino. “Growers are becoming very familiar with late blight, and are taking management actions to prevent it—like not having cull piles, which can become a source of pathogens. The late blight strategies we use in Pennsylvania and the mid-Atlantic are applicable in Michigan and surrounding states as well.”
Aside from eliminating cull piles and destroying volunteers, it is also important to manage solanaceous weeds as well as scout fields regularly. Although the disease name implies that this disease occurs later in the season, that is not true, and plants at any stage of growth are susceptible. If using tomato transplants, be certain they are pathogen-free. In addition, follow late blight forecasting, and consider using a late blight specific spray program when conditions are favorable.
If one of your fields should get out of control with late blight, bite the bullet and burn down the field using an herbicide to kill plant tissue quickly, even if it’s almost the end of the season. The more inoculum, the higher the risk of mating and oospores forming that can overwinter in the soil. The pathogen has to have living tissue to survive. As soon as the tissue has been killed, the pathogen can’t persist or spread.
“Breeding for host resistance is one of our main strategies in dealing with late blight,” continued Gugino. A number of different genes, mostly conventionally bred from wild relatives of the tomato plant, can confer resistance when crossed using traditional breeding techniques.
These are not GMOs. “The first gene we used was called Ph-1, but that is no longer effective because late blight pathogen populations have changed.”
Now breeders are using the resistance genes Ph-2 and Ph-3, and Penn State breeders are working with Ph-5, another gene from wild tomatoes that confers strong resistance. The strength of resistance often depends on whether the variety has one copy of the resistant gene (is heterozygous) or two copies (is homozygous.) The resistance conferred by homozygous genes tends to be more stable.
Breeding new late-blight resistant varieties is happening more quickly now than in the past, since breeders are using a technique called Marker Selected Assistance. In the past, breeders had to grow out the plants resulting from each cross to a substantial size and then inoculate and look for a resistant phenotype. Now breeders use molecular methods to screen the DNA for markers that indicate the presence of the resistance genes. This greatly streamlines the breeding process.
For the latest recommended fungicide programs, check with your local university extension office. There are a number of products that are very effective when applied in a timely manner with good coverage of the plant canopy.
To find out if late blight has been confirmed in your area, check the usablight.org website. The counties where late blight has been confirmed are highlighted.
Late blight symptoms on tomatoes can include brown, irregular foliar lesions, which can have a pale green margin or halo around them. In humid conditions, you will see white sporulation under the leaf. (The spores can blow for miles on the wind.) You may see chocolate brown stem lesions. Unless a secondary organism that causes a soft rot invades it, the fruit will remain firm to the touch.
Staying informed can prevent the spread of blight and keep your crops healthy.