Learning the hard way: Protect your business from theft 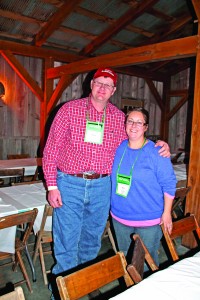 by Emily Enger
When Jason and Amy Ladd received a phone call from a young stranger who confessed his friend had stolen from their business, they were floored. The Ladd’s own Lucky Ladd Farms, a petting farm in Eagleville, TN. The alleged robber was their 19 year-old employee who, in the nature of the young and invincible, bragged about how she was skimming from the Ladds’ till and spent the stolen cash on flashy items like a Mustang convertible and multiple iPhones for her and her friends. Eventually, one of her friends was bothered enough to say something.
If not for that anonymous tip, the Ladds’ would never have known how much money they had lost. Nor would they have made the adjustments in their system that protect them today. But it was an expensive lesson. Their employee hadn’t just slipped herself an extra $100 — she’d skimmed $15,000 over the course of six weekends, a total of 12 short days.
“Part of what made it so easy,” Amy explained, “was that our fees were even amounts of money. Admission was $10, so it was easy for people to have correct change so she could bypass the till.”
If customers didn’t need change, the employee slipped their fee in her pocket; the till would not be opened, therefore there would be no monetary discrepancies at the end of the day.
When the Ladds received the tip-off, they didn’t immediately react, hesitant to accuse someone they knew based on the word of a stranger. They combed through their business for hard evidence, which they found in the form of admission wristbands. Amy knew how many wristbands she had ordered; the number left over didn’t match their profit.
After being confronted with this evidence, the employee confessed.
The Ladds know that next time, a wayward employee may not have a friend with a conscience, so they’re making changes for this year’s season.
There will be drop boxes by each register, where employees will deposit cash once a predetermined amount is in the register. Throughout the day, this cash will be picked up by the Ladds or a manager, to limit how much money cashiers have access to. Each employee will be issued a certain number of arm bands, which will be counted daily. And security cameras will be installed by the cash register. They are considering altering their admission prices, too, so that more customers will need change back.
“Maybe just a 25 cent tax or something,” said Amy. “If our fee had been an inexact amount, it would have at least been more difficult for her to pull off because she would have been forced to open the till.”
They have a stronger system, but it was a sad lesson. The thief was a second-year employee, who they thought they knew.
“We definitely will alter who we trust,” Amy said. “Even with our existing cashiers coming back this year, we’re going to have to treat them differently, unfortunately.”
The other change the Ladds will make is in the hiring process. This employee “checked out” by all the typical standards. She had a good resume and references. She seemed responsible and was even attending college.
But now, the Ladds have gone digging through social media and what they found shocked them. Not only were her pages completely open, without any blocks or restrictions on access, but the stuff she posted was shocking — some of it, more illegal activity!
“We will be looking at Facebook and Twitter pages,” confessed Amy.
Employers accessing social media is a much-debated controversy but Amy isn’t looking to snoop. In fact, she hopes she can’t get access. “I just want to see if they’re responsible enough to have put up blocks,” she said.
Running a seasonal, cash-based business comes with unique challenges. After such an ordeal, the Ladds have learned to be cautious. “Everyone worries about theft from outside people, but we want to trust our employees, which makes us naïve because they’re the ones with the inside information.”
It was a tough lesson, especially when the Ladds consider the new attractions that $15,000 could have bought for this year’s season. But they are more confident in their improved system and hope that sharing their experience will help other agritainment businesses from experiencing the same loss.