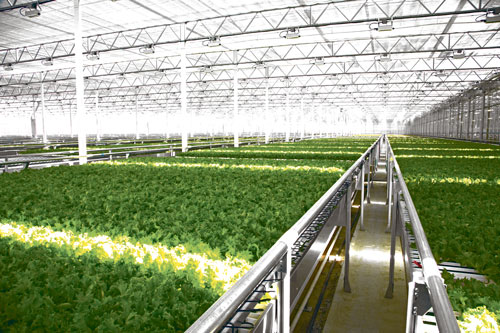 Food grown as close to home as possible, by local farmers, is a lot easier during the growing season than during the harsh winters found in the Northeast. While farmers are getting better at storing vegetables and are extending the growing season at both ends using high tunnels, row covers and even on-farm heated greenhouses, finding fresh produce during the winter most often means relying on growers in California, Florida or Central and South America.

One solution: grow under cover, moving production into larger-scale, sustainably-focused greenhouses designed to supply regional Northeast markets with fresh vegetables year-round. This is the approach taken by Little Leaf Farms in Devens, MA, where the focus is on fresh, direct, transparent and low-mileage salad greens for the Northeast region, year-round.

“To grow greens throughout the year in New England you absolutely need to grow in greenhouses. It’s a way to make local food production a reality given the ever-changing weather conditions,” farmer and manager Pieter Slaman of Little Leaf Farms said. “Our niche is being able to produce fresh, local greens year-round in a controlled environment, and I feel greenhouse growing is the most sustainable way to accomplish this [in the New England climate].”

Growing vegetables hydroponically, year-round, in climate-controlled greenhouses has enabled Little Leaf Farms to supply over 1,000 grocery stores in the Northeast, within a day’s drive of the farm, with baby salad green mixes. The operation has just expanded to five acres of growing space, and has another expansion planned for 2019. Their system is transparent and traceable, going from farm to table with few intermediary steps. Their tagline, “The local lettuce locals love,” succinctly sums up the operation.

Solar energy powers much of the greenhouse operation. Heating is 95 percent efficient, using natural gas. Carbon dioxide is captured and recycled for plant use. LED grow lights, used to supplement the available sunlight and keep the availability of light consistent, use 40 percent less energy than incandescent grow lighting. They require no groundwater, relying solely on captured rainwater from the greenhouse roof.

No Soil and Under Cover

“We import over 90 percent of the food we eat here in New England,” Slaman said. “Local food production is a good thing for everyone.”

According to Slaman, Little Leaf’s emphasis on sustainability means that even though they are a soilless system, they aren’t disassociated with Mother Nature. Far from operations growing in industrial warehouses, exclusively under artificial lighting, Little Leaf Farms is all about sunlight to optimize plant growth, biological controls for pests and rainwater captured from the greenhouse roof – after disinfecting it using ultraviolet light – for plant production.

The crops are grown in a gutter system, utilizing a nutrient film technique (NFT). In this process, a large root mass is grown directly in a small stream of water containing dissolved nutrients, and the upper portions of the plant roots are exposed to needed oxygen.

They also utilize a stone wool system. Stone wool is a substrate made from basaltic rock. Unlike NFT systems, substrate hydroponic systems use a growing medium to support the roots rather than rely solely on the nutrient flow as in NFT. The substrate provides a reservoir of nutrients, should the flow of the water solution be impeded, and provides a buffer against rapid plant responses if the nutrient flow is altered.

Slaman’s background includes managing the largest certified organic greenhouse – growing 25 acres of vegetables in soil – in Holland. He is a fourth generation farmer and takes pride in producing healthy food.

“I completely support the organic movement. I also support what we are doing at Little Leaf Farms, and feel that locally-grown, fresh and highly nutritious leafy greens can be grown well in a hydroponic system. We believe in using as many natural, sustainable resources as possible, including sunlight, and a greenhouse allows for this,” he said. 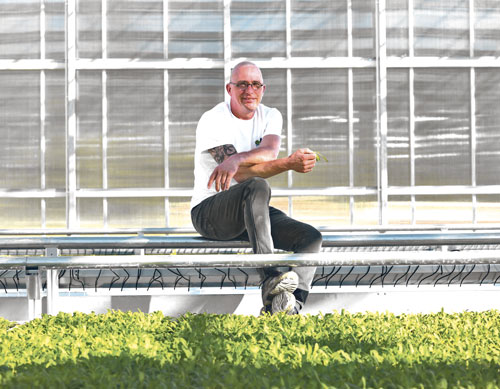 Farming under glass, and in a medium other than soil, is obviously different than digging in the dirt, exposed to the elements. But Slaman is just as involved with his crop as any other farmer. He walks the greenhouse every day, is on call 24/7 to respond to problems and constantly monitors the growing environment to reduce stress on the plants.

“Our growers have become accustomed to sensing the climate inside of the greenhouse, which we modify as needed to protect the crops and make them thrive,” Slaman said. “This is an area where we have a significant benefit, as a traditional land farmer can’t change the environment that his crops are living in to make it better for them.”

The climate in the glass greenhouse is influenced by the actual weather. A computer system adjusts the greenhouses’ climate in conjunction with outside conditions to keep things on an even keel, free from the vagrancies of field growing. Carbon dioxide levels, air pressure, temperature, heating and cooling parameters, humidity and lighting are all controlled via computer to keep the growing conditions optimal and consistent.

The greenhouse environment also has computerized sensors to monitor pH and NPK levels. Fertilizers are delivered to the bare root plants via the irrigation water, plant tissue is sampled continuously for nutrient analysis to ensure the growing formulation is optimal and monthly tissue sampling keeps the leafy greens free of heavy metals, which can be a concern when growing green, particularly in soil-based systems.

“It’s a lot of work and something I spend a lot of time managing,” Slaman said. “For leafy greens, it is all about the climate, and as a New England-based grower dealing with a wide variability in climatic conditions, I welcome the challenge.”

Insects and pests are closely monitored, and only biological controls are utilized. Scouting occurs daily, and the operation has never suffered a loss due to disease or pest issues.

“Biological control works when it is properly managed, but it is more expensive than using chemical products,” Slaman explained.

An automated system moves the gutters around the greenhouse, based on plant maturation, both to maximize planting density and to keep shading to a minimum, optimizing the available sunlight. Under these controlled conditions, full lettuce maturity takes roughly 45 days, while baby greens are ready to be harvested at 25 days.

Another benefit of greenhouse hydroponics, Slaman advocates, is enhanced food safety. Because so much of the process can be automated, human error and contamination possibilities are greatly decreased.

Crops are grown chemical-free, and no chemical washing agents are used on the crops. Plants are seeded, cut, harvested and packaged without human contact, decreasing the possibility of contamination. Seeds are placed by machine into the mobile gutter units, and growing conditions and plant health are monitored – both by computer and by human observation – without any contact.

When ready for harvest, the plants are cut and packaged via machine within three minutes of leaving the greenhouse. The temperature is automatically dropped and a continual cold chain from harvest to sale is maintained. Plastic four-ounce tubs are used for retail sales, while restaurants and food service customers have three-pound bags available. Product is made available on store shelves within 24 hours of harvest.

“Our crops do not come into contact with human hands as this represents a food safety issue, but that does not mean that there’s any less care involved,” Slaman emphasized. “I realize automation will never replace the human element in growing! Growing is a labor of love.”