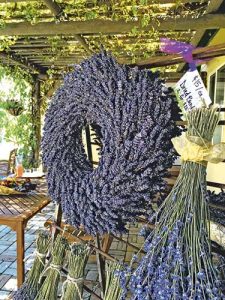 by Catie Joyce-Bulay
Blue Mountain Lavender Farm is a little pop of purple tucked into the rolling wheat fields of the Walla Walla Valley in Southeastern Washington. The fresh scent wafts from the fields into the yard and porch, where customers are offered lavender lemonade and provided wicker baskets and scissors for cutting their own bouquets. The farm also grows other perennials that bloom simultaneous to the lavender for their U-pick operation, including red poppies, California poppies, echinacea, salvia, daisies and daylilies.
“Our emphasis is on visiting the farm, taking your time, sitting in the shade, bringing a picnic — kind of slowing down,” says Karen Grimaud, who owns and runs Blue Mountain Lavender Farm with husband Jean-Paul Grimaud.
In addition to U-pick, they harvest and dry lavender for potpourri and culinary use, which they sell online and in their onsite boutique. Much of their sales comes from providing flowers for weddings and events.
The dry climate of eastern Washington is ideal for lavender and is very similar to that of the Mediterranean where the plant originates. “Lavender is famous for its minimal growing requirements — it does well in poor, rocky, well-drained soil,” Grimaud says. She notes that minimal fertilizer is used (a balanced mix of 16-16-16 when needed) and if over applied it will generate more leaves and fewer blooms. Gophers are the only pest they’ve encountered, she says, noting that deer and rabbit don’t like the taste of lavender.
The Grimauds were new to farming when they moved from France to Walla Walla and began planting in 2000. They had visited the large lavender fields of Provence, France and a small farm in the states. “We’d led kind of a suburban life up until then,” Grimaud says. “When we had the chance to move to Walla Walla and live in the country and have this lifestyle, we thought that’s what we wanted to grow.”
Since Jean-Paul is a professor at nearby Whitman College, the timeline for growing worked well with his teaching schedule. The plants come out of hibernation around the college’s spring break and their blooming season begins in June and lasts over the next six weeks.
“We wanted to carve out a more old-fashioned lifestyle for our family,” Grimaud says. “I wanted to stay home with the children and generate a little income from the property.” Lavender made that possible.
That first year they began with 100 plants on a quarter acre, teaching themselves as they went. “We were such newbies,” she says. “We didn’t know anything about anything. But it just goes to show that you can learn to do amazing things with a few good books and talking with people.”
The farm has evolved over the years from selling at farmers markets to including the U-pick element, which isn’t often offered on lavender farms. “As the plants matured we thought, ‘wait a minute, it’s so beautiful here, let’s change what we’re doing and get people to come here’,” says Grimaud.
They now grow 25 kinds of lavender on two acres, including 18 English and seven French varieties. “English lavender, which is closest genetically to indigenous lavender from the Mediterranean basin, is generally shorter, sweeter and more intense in color,” says Grimaud.
English lavender is most often found in culinary use. Whereas French lavender, with larger plants and longer blooming spikes, has been hybridized for a higher oil content. The French lavender produces nearly twice as much oil as the English variety, but is of a lower grade.
Grimaud notes French lavender is well-suited for drying and using in crafts and potpourri. They teach wreath-making and other lavender crafts to visitors of the farm in the summer. Grimaud and her mother spend much of the winter sewing decorative sachets to fill with dried lavender, which they sell in the store.
Grimaud’s mother and father, now in their 80s, live on the farm and help out alongside the rest of the family. Including their three children in the work of the farm was important to the Grimauds. “It’s something that the kids have been able to be involved with at every level,” she says.
This summer was different from previous seasons because all three of their children married and moved away. So in addition to extending the stay of a niece, they hired two neighboring youths to help out. “Doling work out to non-family members required us to be more thoughtful about scheduling and organized about our field work teams,” says Grimaud, but notes it went better than expected. “What seemed like a dreary work season from the front end came off rather nicely with the competent and willing kids we hired.”
Grimaud, who grew up near Seattle, has family ties connecting her to the region. Karen’s great-great-grandparents settled in nearby Milton-Freewater and ran a nursery from the 1870s up until the 1970s.
“So I kind of feel like I’m carrying the family torch in a way,” she says. “I’d like to think that they would think it was cool that their descendants were interested in growing something.” The farm’s three main fields of lavender are named after her great-great-aunts, Sophia, Louisa and Francis.