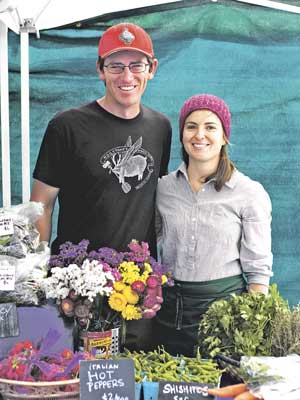 The Walla Walla Valley of Eastern Washington, home to long sunny growing days, an arid climate and soils enriched by Ice Age flood deposits, is best known for its wine grapes and wheat. Many other crops grow beautifully in its fertile soil as well, and a group of local farmers is working on promoting them, through their co-op, Walla Walla Grown.

“Walla Walla is earning itself a name regionally, nationally and globally for wine,” said Emily Asmus, owner of certified organic Welcome Table Farm and co-op member. “But the food that is grown here is also special in similar ways.”

Walla Walla Grown wants to pursue the benefits of Walla Walla’s name recognition in both local sales and regional markets. The co-op, which started as an informal farm club in 2016, has seven members. The group continues its initial purpose of touring each other’s farms, exchanging ideas and cooperating on shared purchases, while working together on direct marketing.

One of Walla Walla Grown’s goals is to create daily year-round access to produce for local customers. Previously, customers could access produce at the Saturday downtown farmers market running from May to October, seasonal farm stands and a seasonal CSA.

“We toyed with the idea of a farm store,” said Chandler Briggs, member and owner of Hayshaker Farm, a horse-powered farm that uses organic practices on its six planted acres.

The group soon realized that was not a realistic option. “The idea of having a storefront is appealing, but none of us want to be grocers or have the capital to start a store,” said Asmus, who started the vegetable and flower farm with husband Andy in 2006.

Harvest Foods, a local grocer, approached members of the co-op last year about selling their produce in its store. “Their management is really focused on local and worked with us to…designate a section of their produce area for local foods, so Walla Walla Grown has a place to sell on a daily basis there,” said Briggs.

This was the first year Hayshaker Farm, open in 2015, was able to provide produce year-round to its customers. This winter they supplied Harvest Foods with broccoli, spinach, arugula, radicchio, fingerling potatoes, carrots, beets, turnips, squash and garlic, accounting for nine percent of the farm’s sales for the year.

In addition to the local grocer, last year the group started a seven-week fall farmers market to complement the summer market. When the organization running the summer market was unwilling to extend the season, the co-op looked elsewhere and found a welcoming partner in Whitehouse-Crawford, a local fine dining restaurant that already purchased produce from several of the farms for their dishes. They invited other local farms to sell their goods and had regional guests such as Oystercatcher Shellfish from Coupeville, WA. Briggs said the market was a success that they will repeat again this year.

Walla Walla Grown is currently focused on the local market, where their main goal is to raise awareness. Marketing has comprised of social media, particularly Instagram and Facebook, a website, logo design and getting an article into the local newspaper. Harvest Foods has promoted them in their store with banner-sized photos of the farms and growers.

Briggs hopes to someday have a year-round market. “I think it’s just building up the awareness of the community,” he said. “The community is so used to only having their farmers market for six months of the year for the past 20 years.” He noted that a year-round market means the farmers will need to build up their supplies and infrastructure, requiring time.

The group is currently invite only. “We invited certain members in who we wanted to market together,” said Briggs. “We’ve decided to keep it small with either growers who are organic or who practice growing organically and who have an expressed interest in producing high quality produce, eggs, flowers and meat.” Each member pays in to cover marketing and website costs of the unincorporated co-op.

Walla Walla Organics, which grows organic genuine Walla Walla sweet onions, beans, spinach and squash, and conventionally grown wheat and alfalfa seed, is another member. Since the farm had an established regional market before joining the co-op, co-owner Sarah McClure said Walla Walla Grown has not been their primary focus but they have benefited from the group. “We want our product available locally, so Walla Walla Grown is a piece of our marketing.”

The co-op creates a natural opportunity for partnerships between local farmers to emerge. Welcome Table Farm recently partnered with member Frog Hollow Farm, a vegetable farm, started in 2006, focused on uncommon heirloom varieties. The two farms market the heirloom vegetables they provide to a Seattle retailer under the Walla Walla Grown label.

The group hopes to eventually expand its regional market to include more customers in the western part of the state. “I think we developed [Walla Walla Grown] as a platform where other ideas and partnerships could have an easier time getting set up,” said Briggs. “Exporting excess or certain crops that grow well here could be a way to create more jobs in local agriculture because there’s a high demand for product here and we’re able to sell most of it in Walla Walla,” a city with a metro population of about 64,000 with five major grocery stores.

“The number of young people getting interested in farming and starting farms is growing now and I think we’ll probably see that again with the next ag census,” said Briggs. “We’re helping create that foundation, we hope, for the growth of the local ag community as the supply grows, as more farmers start growing because that’s the trend and we believe that will continue.”