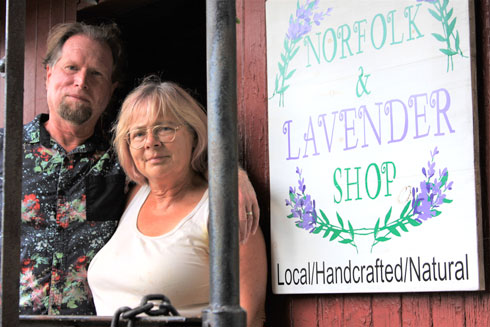 Ken and Bonnie Swanson with their farm sign, on the family farm near Appomattox, VA.

Nearly 40% of 6,000 Central Virginia farmers are women, a trend USDA officials say compares with the rest of the country.

One of them is Appomattox lavender farmer Bonnie Swanson, who presides over Evergreen Lavender Farm with husband, Ken.

She shares her fragrant swath of land near the place the Civil War ended with her spouse and a friendly pack of canines named Freda, Lucy and Mike and a cat named Minx. What began in 1998 as a cut flower operation hums with bees attracted to rows of lavender blossoms and clusters of brilliant zinnia and sunflowers.

Swanson, an amiable, bespectacled Pittsburgh, PA native, serves iced tea steeped with lavender and mint and creamy lavender gelato, refreshing treats for visitors seeking respite from the heat in her circa 1930 farmhouse.

Recently released findings from the 2017 farm census showed that nationally 36% of American farmers and ranchers are women, and 56% of all U.S. farming operations have at least one female decision maker. From 2012 to 2017, the number of women working farms rose 27%.

The Swansons, parents of two grown sons, were looking for a small farm midway between their home state and Florida when they tired of the year-long search and settled on an overgrown, 10-acre spread  in Virginia, according to Bonnie. Following the advice of a Petersburg Extension agent, they put the land into cut flower production for the florist market: phlox, blue globe thistle, lavender, sunflowers, zinnias and snapdragons.

“We grew things florists couldn’t ship because they were too fragile,” Bonnie recalled. “I’d drag the kids with me, peddling to florists in the Lynchburg, Richmond and Nellysford markets.” She’s still a fixture at the Lynchburg farmers market, a half-hour’s drive from the farm.

The Great Recession killed the market for flowers in 2008, forcing Bonnie and her husband to rethink their business plan. Following a trip to Oregon, which commercially grows the bulk of U.S. lavender on small farms, they decided to try the same in Virginia. Despite a loamy clay soil, the herb flourished. 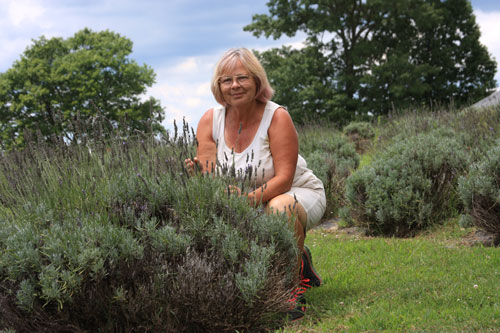 Bonnie is surrounded by fragrant lavender, used for centuries in foods, medicines and for its wonderful scent.
Photos by Rebecca Jackson

Bonnie readily found a market for her crop among retailers and crafters.

With its pleasant scent especially efficacious in aromatherapy, lavender has long has been known for its medicinal uses, including relief of skin maladies, itching, anxiety and sleep disturbances. It also is used in teas and other drinks, baked goods, salads, simple syrups and gelato and ice creams.

“I started with soaps, then lotions, and through a lot of research, discovered culinary varieties of lavender, how to make sprays, pillow and sachets,” Bonnie said, which she marketed and taught others how to create through spring and summer workshops. “I truly believe lavender is therapeutic.”

“It’s really just us,” she said of the planting, tending and workshops. “We have some part time help in the busy time of the year.”

Like most herbs, lavender is a remarkably hardy plant. It prefers dry, sandy soil to damp, is cold- and insect-resistant and unattractive to the region’s deer population. The plants take three years to grow to maturity and have a lifespan of about a decade. Bonnie and Ken first planted theirs from 2009 to 2011 and opened the farm to the public in 2014. Following experimentation with soil composition, the couple discovered the addition of pH-boosting lime and calcium favorable to healthy plant production.

“We plant all year round,” buying immature plants from a Pennsylvania grower, said Bonnie.

“Spring is nuts, from mid-April through May,” when flower production is at its zenith, she added. “Everything is growing, and we’re trying to get all the planting done before it gets too hot.”

Today, they hold classes on lavender cultivation and its myriad uses, as well as morning outdoor yoga classes. With an eye to special music events, they’ve constructed an outdoor stage and plan in the future to open the farm to small weddings. There also is a 1915 restored cottage on the property large enough for two couples and available for vacation rentals.