Making the most of pumpkin season 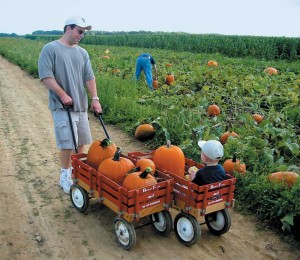 by Ellen Wren
Pumpkins are big business in the United States. More than 50,000 acres of them are grown annually across the nation. That’s a lot of pumpkins, which are harvested almost entirely by hand.
So how do growers best market this massive crop? Besides wholesale orders for retailers, agritourism is often the key. People love a pumpkin-spiced family outing when they choose their pumpkins. Many families return to the same farm year after year for the additional attractions, creating a tradition of pumpkin picking with all the trimmings.
Even those who arrive with the intention of only enjoying the attractions tend to get into the spirit of the season and leave with a pumpkin or two. Steve Templeman, marketing and promotions director at Maris Farms in Buckley, WA believes two things bring people out, “Experiencing family traditions on a farm is never going to go away in terms of making great memories, and two, there’s always the ‘what will Maris Farms do that’s new and different this year?’ factor”.
Many farms are getting creative with the ways they attract their pumpkin customers. Maris Farms is introducing a new event this year, a Pumpkin Destruction/Smash event, which is a fundraiser for cancer research.
Russell Farms Pumpkin Patch in Noblesville, IN added a large merry-go-round, circa 1950, which Daryl Russell reports has been a big hit. Surprisingly, new spooky décor is a great way to appeal to repeat customers. A new corn maze theme each year adds interest to a trip to the farm. Festival weekends where all the stops are pulled out, with live music and food trucks will attract a lot of attention. Some farms are adding paint ball games. Installing grills and setting reservations for them invites large groups to gather for barbecues and spend the day at your farm. This inevitably leads to pumpkin and concession purchases.
Fresh ideas are fun and expand your market, giving your operation a unique identity. But old-fashioned fun will always be a staple of autumn agritourism. Jack-O-Lantern carving, pumpkin painting, hay rides, great decorations to enjoy and face-painting are time-tested favorites, with good reason. Corn mazes and straw bale mazes are very popular and entice families with older children and teens to spend some time at a farm. Done after dark with flashlights, it really amps up the excitement. Haunted house or barn type attractions appeal to this crowd as well.
Storytelling and s’mores around a campfire can complement your other spooky evening time activities. Ghost stories are an obvious choice, but pumpkins have an interesting folklore to share as well. The practice of carving one for Halloween originated from an Irish myth about a man called “Stingy Jack”, or “Jack of the Lantern”. The story isn’t well known so could be easily promoted as an exciting myth to be revealed about Jack-O-Lanterns. Interestingly, throughout Britain and Ireland, there is a long tradition of carving lanterns from turnips and rutabagas. Adding this activity or decoration is unique in the U.S. and makes for an interesting conversation piece, spreading the word about your farm.
Other ideas that have brought in customers include contests of all sorts: seed spitting, pie baking, pie eating, and costume contests for all ages. Giant pumpkins are an exciting photo opportunity for people of all ages. Young children love corncribs; a pen or area filled with dried kernels, similar to a sandbox. Pumpkin slingshots or cannons are a great feature that appeals to all ages and are a fairly inexpensive and simple attraction to manage. Some more modern ideas that crowds enjoy are zip lines and bounce houses.
Seasonal foods like cider, cider doughnuts, caramel and candy apples and pumpkin treats are a mainstay. Creating a specialty item that’s unique to the character of your farm helps to create family traditions that can only truly be satisfied by a visit there, upping your sales. For example, is there a large Ukrainiane population in your region? Selling hot, homemade borsht made from your beet harvest may make your farm more appealing over the next one if parents can share delights from their homeland with their children by patronizing your operation. For family farms, consider tapping into the cultural background of the family. It’s not likely that every other pumpkin picking locale in your area is serving up poffertjes (small, fluffy pancakes served with butter and confectioners sugar) but in The Netherlands, it’s commonplace. Even adopting a regional tradition outside of your own can put a unique stamp on your concessions.
Pumpkins left behind after Halloween can be plowed under, donated or fed to livestock. Daryl Russell of Russell Farms Pumpkin Patch says he feeds leftover pumpkins to their goats. Maris Farms and many others donate quite a few pumpkins each year to schools, organizations for underprivileged families and other causes. A grand finale with a pumpkin cannon or sling shot is an entertaining way to make use of leftovers, and can create a fun little sideshow or activity for patrons, come the end of the season.
Rex Zenor, of Piney Acres Farm in Fortville, IN stresses the importance of online presence. “The website is the biggest asset any retail operation has, plain and simple. Without it, I’m not sure I could survive, or at least it would be a lot harder to succeed”, he stated. Daryl Russell agrees with the importance of a good website. He also stresses the importance of word of mouth, facebook and well-placed flyers, suggesting pediatricians’ and dentists’ offices.
Whatever ways a farm chooses to attract customers, the friendliness and willingness of the staff to help, chat and laugh with visitors always encourages them to return year after year. Russell recommends, “Don’t just have someone stand there and take money for pumpkins. Engage with them — give them ideas about what looks good together. Just treat people they way you would want to be treated.” Sound advice for any operation, for any season.