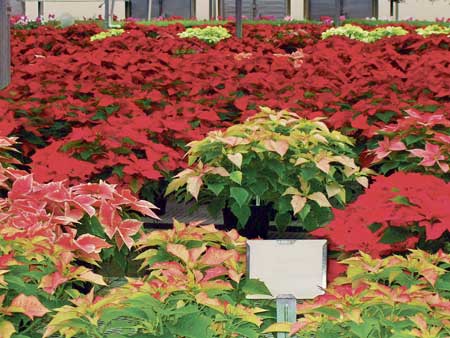 Christopher Currey, assistant professor of horticulture at Iowa State University, says that with the right strategies, growers can manage light throughout greenhouse production.

“Managing photoperiod in the greenhouse is an important factor in crop production,” said Currey. “We want to manage it to promote flowering. Many plants have a flowering response to day length, or photoperiod. By getting plants into flower, they’re more marketable and appealing to consumers.”

Currey says plants available for sale should be fully developed because consumers are more likely to purchase a plant or basket if they can see what it looks like rather than relying on information on the tag.

“Another reason we want to manage flowering is to minimize excessive growth,” said Currey. “Plants aren’t marketable if they don’t have flowers but are getting large, which will require more growth regulation, more water, more fertilizer and more labor to grow them until they’re ready to sell.”

Controlling photoperiod can also help inhibit flowering. If plants begin to bloom too early, flowers begin senescing and the grower has to deal with dead flowers. Currey says the goal is to direct energy into vegetative growth as the container is being prepared for market.

Some plants respond to photoperiod by going dormant, as in nature. “As the days start to get shorter during summer and into fall, woody and perennial plants start to form buds,” he said. Currey uses the example of a dahlia starting to produce tubers as it begins dormancy. “That takes some of the energy away from the reproductive growth of the flowers. That’s what we’re trying to market.”

There are a variety of flowering responses to photoperiod. The most common responses include day neutral plants (DNP), short day plants (SDP) and long day plants (LDP). There are also some dual day length plants, which require long days followed by short days, or vice versa. Most spring annuals, perennials and potted plants fall into one of the first three categories.

“With day neutral plants, flowering will not occur in response to any specific day length,” said Currey. “Neither short or long days promote the flowering. They grow and flower under both photoperiods.” Currey says there may be other noticeable side effects when a plant is grown under long day lighting. When the days are long, there might be more photosynthetic light, which might lead to more vegetative growth, or more bulk on the plant.

“If you’re trying to create short day conditions when the day length is long, such as in later spring, summer and early fall, our only option is to use blackout cloth,” said Currey. “Black cloth can be drawn over the crop to truncate the day. At the end of the day, at about 5 or 6 p.m., this cloth may be pulled over the crop in order to block out the light and make that long night period when you’d normally have a naturally short night.”

Currey explained that the cloth is a synthetic black fabric, and the side that faces the sun is aluminized. That surface reflects some of the light and reduces the amount of radiant energy from the light that may be trapped under the black cloth. “What can happen is when we’re pulling that black cloth at 5 or 6 p.m., like for an early poinsettia crop and we’re pulling it in early September, it can still be fairly warm in the afternoon,” said Currey. “We need to make sure we reflect some of that radiant energy from the light and try to minimize the heat buildup under the cloth to avoid the heat delay. We pull the cloth over the crop to black it out, then retract it in the morning. That’s the only way to create a short day in the greenhouse when the days are naturally long.”

Long day plants produce flowers in response to long days and short nights. As with short day plants, there are obligate and facultative responses. Obligate long day plants flower under long days and short nights, but under short day conditions, the plant doesn’t flower at all. “It’s ‘obligated’ to be exposed to long days for flowering,” said Currey. “With the facultative long day response, plants flower under both long and short days, but flower initiation is delayed under short days as evidenced by the increased number of nodes that developed before the flower was formed on the apical meristem.”

There are two primary ways to create long days in the greenhouse. The first is the use of day extension lighting, which involves lights that operate before the sun rises or after the sun sets to extend daylight. The other way to create a long-day condition is to use night-interruption lighting. “We’re interrupting that dark period,” said Currey, “most commonly between 10 p.m. and 2 a.m. to chop that large, uninterrupted dark period into two smaller dark periods; creating two short nights as opposed to a long night. This is also called mum lighting.”

Incandescent bulbs with pie plate reflectors are commonly used to create long days. “It’s cheap and relatively easy to install,” said Currey. “It’s very accessible for all growers to put in some kind of day extension lighting. Another benefit of this lighting is that it has a good balance of red and far red light.” However, incandescent bulbs are not energy efficient.

Low-intensity light emitting diodes (LEDs) are one of the newer technologies for lighting. “Flowering lamps are designed to provide low intensity lighting,” said Currey. “This is not the type of LED you’d suspend above a crop to increase or enhance photosynthesis — this is just to manage flowering.”Currey says LED lamps are very energy efficient and have a long life span. While the upfront initial investment may be higher, long life and low energy consumption make LEDs an economical alternative for long-term use. LEDs also have a good blend of red and far-red diodes to provide the right spectrum required for flowering.

High-pressure sodium (HPS) lamps are another lighting option. “If you already have HPS lamps in your greenhouse and are using them to boost growth and photosynthesis, you can simply operate these during the dark period at the end or beginning of the day, or in the middle of the night, and get long day response from plants,” said Currey. “There are also strategies where we can use HPS lamps solely for photoperiodic lighting.”

HPS lamps with an oscillating reflector shine light across the crop and the light beam moves across the crop, which allows lighting of larger areas with fewer fixtures than incandescents or LEDs. Some growers mount HPS lights on a boom and move them across the crop at night, which provides enough light to interrupt the night and requires only a few fixtures.

Key points of managing photo period. You can produce a better crop, avoid inappropriate or premature flowering, and avoid delayed flowering and excessive growth. We can produce plants that will be more marketable.

“Ultimately, you can produce a better crop,” said Currey, reviewing the benefits of lighting. “We can avoid inappropriate or premature flowering. We can also avoid delayed flowering and excessive growth. We can produce plants that are more marketable.”