Dr. Mark Schonbeck, research associate at the Organic Farming Research Foundation, has spent 31 years in sustainable and organic agriculture. He is especially interested in soil health and how farmers, especially those in arid climates, can preserve soil moisture and optimize production.

Schonbeck explained the results of a 2015 survey of organic farmers across the nation, including 555 farmers in the West. Western region farmers rated soil health as their top research priority, with 71% considering it a high priority. “Another high-ranking research item was irrigation and drought management, with 56% considering it high priority,” he said. Schonbeck added that category included managing water and building healthy soil, designing drought resilient systems, cover cropping with limited water and soil life and nutrient cycling in dry climates. 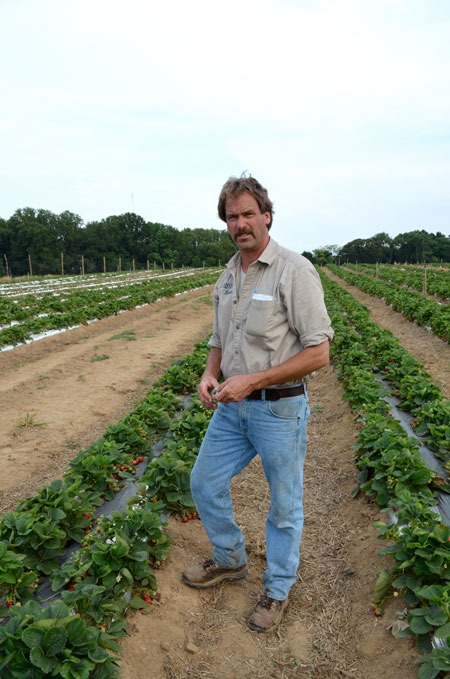 Dr. Mark Schonbeck, research associate at the Organic Farming Research Foundation, said when there is more evaporation and transpiration than rainfall in semi-arid to arid climates, there’s a chance that soluble salts will move toward the soil surface and create saline conditions that limit crop growth.
Photo courtesy of Mark Schonbeck

Schonbeck explained that when there is more evaporation and transpiration throughout the year than rainfall in semi-arid to arid climates, there’s a chance that soluble salts will move toward the soil surface and create saline conditions that limit crop growth. “A lot of the most productive agricultural regions in the maritime Pacific Northwest and parts of northern and central California (Salinas Valley, Sacramento Valley) have a Mediterranean climate where most of the rainfall happens in winter, yet most of the crop production happens during summer. With intensively managed vegetable crops, those summer crops are grown with irrigation,” he said. That means in winter, nothing is in the ground, and there’s potential for nitrate leaching.

Despite low rainfall or limited irrigation, healthy soil keeps crops watered because soil organic matter (SOM) has a high moisture holding capacity. Schonbeck said a review of silt/loam texture soils across the country found that for each 1% increase in SOM, there was a 4% increase in water holding capacity (WHC). “That’s partly the water holding capacity of the organic matter,” he said. “It’s also an indirect effect of good soil health, meaning there’s a network of pores open to the surface so water gets in easily. Because it’s well-aggregated and has low bulk density, there’s large capacity. It’s the biological activity and biodiversity that maintains organic matter and soil structure.”

Surface crusting is another result of soil compaction, and can be the result of frequent cultivation and no protective residue on the soil surface. “The rain beats down, seals it off quickly and a lot of it runs off,” said Schonbeck. “You’re losing a lot of that water – it’s no longer staying in the field.” Also possible is a distinct hardpan that’s the result of tilling to the same depth for multiple growing seasons. This plow pan is usually four to 12 inches below the surface, and can potentially stop root growth.

Too much moisture, whether that moisture is from heavy rain or irrigation, can also affect soil health. Schonbeck said excess moisture creates surface sealing and clogging of pores, resulting in runoff and potential erosion. “The waterlogged state is harmful to plant roots,” he said. “It reduces oxygen levels, kills aerobic soil microbes and increases the risk of crop disease such as root rots that like anaerobic conditions.” Additionally, some weeds thrive in moist conditions and can take over the crop.

Schonbeck noted that crop diversity results in more efficient use of water and nutrients because some crop roots vary in depth. “There’s a direct relationship between diversity and the level of organic matter,” he said. “Living roots play the most vital role – they’re continually feeding the soil biota and recreating pore space and WHC.”

Compost is rich in organic materials and adds stable organic matter. “It sticks around for a long time and it acts in a complementary fashion with cover crops,” said Schonbeck. “The two together build more soil health outcomes, including WHC, than either one alone. Mulching conserves moisture and prevents crusting.”

Schonbeck added that when a squash crop is planted into a roll-crimped cover crop that’s been terminated without tillage, there’s adequate surface mulch that conserves moisture without damaging soil structure.

Mulching saves water, and Schonbeck said the best mulches act as a one-way valve. Porous organic mulches such as straw or landscape fabric allow moisture (rainfall or overhead irrigation) into the soil while limiting evaporative losses. However, non-permeable plastic mulch can result in ponding of water on the surface of plastic. If water runs off the plastic, nutrients and soil are lost – even with minimal slope.

“With overhead irrigation, there is a greater degree of surface sealing and compaction from the impact of the water from above,” said Schonbeck. “It may not be as efficient in getting water to the crop. In-row drip is excellent for efficiency and is much gentler – it doesn’t pack soil down with simulated rain.” Schobeck said in dry climates, leaving alleys unwatered for periods of time can slow the process of mineralization by soil life.

Irrigation can be challenging in arid regions. Groundwater used for irrigation may be saline or alkaline, and salts can accumulate near the surface. High sodium directly degrades tilth, resulting in lower crop yields and depleted aquifers.

In an irrigation study by Utah State University, researchers compared different methods of managing orchard floor soil. Schonbeck said a number of studies have shown that if the orchard floor is left bare, soil quality is degraded. Half of the soil organic matter can be lost, and the result is lower WHC. “Utah State found that in an irrigated orchard, when legumes such as trefoil were planted in alleys and a shallow-rooted living mulch was placed under the trees where you’d think it would compete with moisture, there was better soil health, better tree root growth and better tree nutrition from the legume in the alleys and water needs did not increase,” said Schonbeck.

From 2014 to 2017, irrigation allotments were reduced in California. In studies at UC Davis, researchers wanted to learn what would happen if irrigation was shut off two weeks early and tomatoes were allowed to finish ripening on residual moisture 45 days prior to harvest rather than the traditional 30 days. “The first year, stopping early saved a full six inches of irrigation water per acre,” said Schonbeck. “Yield was not affected, so water use efficiency went up substantially.”

Dr. Bernadine Strik, Oregon State University, evaluated organic blueberry cultivars, mulching and irrigation practices. Schonbeck said blueberries are sensitive to both too little and too much water, and Strick’s results showed that in-row drip under organic mulch works best. “In blackberries, she found that dropping the last irrigation saves two inches of moisture, and can improve the winter hardiness,” he said.