Marketing a premium crop in a tourist destination 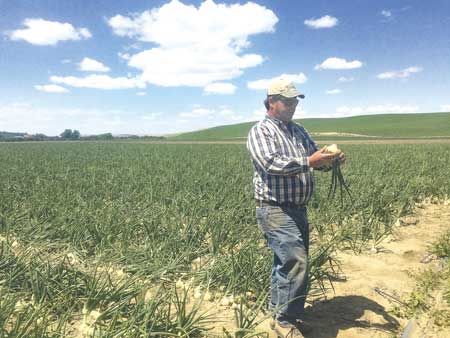 In a town so nice they named it twice grows an onion so sweet you can eat it like an apple, though most prefer it freshly sliced on a summer salad. The Walla Walla sweet onion, similar to Georgia’s Vidalia onion, is a symbol of state and city pride. In 1990, the onion was designated Washington’s state vegetable. The town of Walla Walla celebrates its famed onion with a festival held on Main Street each summer and its collegiate-level baseball team, named the Sweets, isn’t complete without its spunky mascot, Sweet Lou.

To help with this issue, the Valley’s sweet onion growers came together in 1995 to form the USDA Federal Marketing Order No. 956 to protect their industry. The order established a distinct production area for Walla Walla sweet onions. Only growers within the Walla Walla Valley, comprised of Walla Walla County in Southeastern Washington and Umatilla County in Northeastern Oregon, can market the sweet onions. They developed a trademark logo to identify them as genuine.

The McClures differentiate themselves further since they are the only farm to grow sweet onions organically in the Valley, essentially making them the only growers of organic genuine Walla Walla sweets in the world.

This means they grow all their own seeds. Their 250-acre organic fields produce organic Walla Walla sweet onions, beans, spinach and squash in rotation. On their hilly higher 400-acres they grow alfalfa conventionally.

The Walla Walla sweet is derived from a Spanish variety that was found growing in Italy. It was brought to the Valley over a century ago by a French soldier from the Island of Corsica.

The onion took to Walla Walla’s mild climate and rich volcanic soil and has been selected for sweetness and a large round shape throughout the years. “The sweetness is from the terroir. Like with wine grapes, it’s in the soil,” said Sarah. Its sweet flavor is due to its low sulfur content.

The bulk of their onions stay on the West coast, distributed to restaurants and grocery stores, including Whole Foods and Trader Joes, from San Francisco to Canada.

“Three years ago, we had genuine Walla Walla organic onions in a Whole Foods in Georgia. I wanted to get on a plane and take a picture of it. Typically, that doesn’t happen. The [Georgia] Vidalia onions are not as sweet as Walla Walla, but they have figured out a way to store them,” said Sarah, who added that when the Walla Walla sweets come onto the market they are competing with Vidalias that are coming out of storage. They have not yet figured out how to store Walla Walla sweets for long periods of time. The McClures’s onions are heat-cured and packaged in Othello by Anderson Organics.

The farm has been able to extend its growing season from mid-June through mid-September by doing three plantings. The McClures plant three different varieties, three times a year — Super Early, Early French and Garby, which was developed by a local farmer.

They all taste the same, according to Sarah, and have clearly defined harvest times. “One of the first years we raised onions, we realized they’re more affected by the daylight hours than they are temperature,” she said. “When they’re ready their tops will fall down. They pretty much fall down at the same time, and it doesn’t really matter what the temperature is.”

They plant an overwinter crop in September and send seeds for a spring planting to Arizona in November, where they are organically grown into seedlings in the milder climate and then transplanted by hand back in Walla Walla in April. Because the onions are so delicate — they are 90 percent water — they are both hand-planted and hand-harvested.

The farm uses drip irrigation and is working on installing a permanent drip system, instead of tape. “[The new irrigation system] will stay in the ground for 20 years,” said Dan. “It’s a great way to irrigate, a lot easier. Otherwise we have to use hand lines.”

The only pests they deal with on a regular basis are gophers. “There are some pests,” said Dan. “But if you put the right things in the soil the plants naturally fight off the pests.”

“Just like a healthy person can ward off disease, the onion can too,” added Sarah.

Their biggest issue is weeds. They hire a group of six local women to hand-weed from March to August. They also bring in crews for transplanting and harvest and have 3.5 full-time employees throughout the year.

The McClures, who both grew up farming, owned a John Deer dealership in town for 30 years before turning to farming, although it was always in the back of Dan’s mind. Starting a partnership with another sweet onion grower in 2001, they focused on organics and worked to actively increase their acres before going full time in 2011.

The sweet onion crop is on a four-year rotation. The McClures grow squash after the onions, then spinach, both of which are processed into organic purees for soups, smoothies and pie filling. Beans, including small red merlot, black and flageolet, and then a cover crop are the final rotations before returning to onions.

The McClures are always trying out new vegetable and bean varieties to complement their primary crops. Last year they tried watermelon, but, although Sarah said they were delicious, it didn’t work well with the other crops, since it needed to be harvested in July, already a busy time of year for the farm.

This year they are trying out a couple acres of zucchini for processing. The couple enjoys farming, especially organically, because of the problem-solving involved. “The challenge is what makes it interesting,” said Sarah. “We don’t do the same thing every year.”