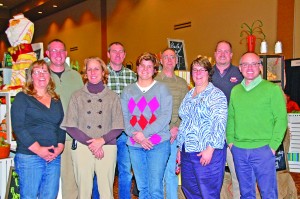 by Bill McNutt
Marketing of food in the future while assuring its safety were two primary items on the agenda of Ohio Produce and Marketing Association Annual Convention and trade show held mid January, with 60 educational sessions offered in a three day period, including a two-day, 80 exhibitor trade show. Reggie Griffin, keynote speaker and past corporate vice president of merchandising for Kroger produce and floral marketing, addressed major trends coming on the scene. He pointed how food habits were changing, that typical families no longer set down to three meals a day, but rather pick up six to seven snacks over a period of 12-15 hours.
Processing food companies are spending tons of money to prove their product, when it can be duplicated, is equally nutritious as fresh, which has been scientifically proven but is not generally believed. All sources will be needed, since our population will increase by 40 percent in the next 40 years. As middle class incomes remain static, there is more concern with income inequality, causing a trend toward cheaper self-service markets and food sales outlets such as CVS, Walgreens, Target, Drug Market and Dollar Stores. Frozen foods, particularly in non-fresh seasons, are on the upswing, as processors concentrate on products that look and taste better.
Griffin said that customer preferences change faster than businesses or marketers do. What customers bought 10 years ago is not what they are buying now — nor is where they go to buy it. Big box merchandisers have become larger, offering more choice plus the ability to buy online. Dieticians are in demand, working with hospitals, schools and other food serving institutions to set nutrition standards; children grow up with parents and primary schools emphasizing nutritive value of fruits and vegetables, with their cafeterias serving locally grown produce.
Griffin termed today’s customer as “confused, connected and in control.” They are confused because of changes in the economy, government and their own personal situation, along with their inability to predict what comes next. They are connected because smart phones can check bar coding on products, then estimate nutritive value. The customer is in control because they alone decide what and where to buy. The customer is not always right, but because he or she is the buyer, is always in control.
Without question, consumers are getting more involved with their food. Retailers must understand newly current inflow: late 20s, single or just recently married, are desiring food not even sold 10 years ago, with knowledge of its calories and nutrition. Griffin constantly get such questions as: is organic better than conventional, is local better than produce imported from further away?
Growers’ responsibility is not to settle those questions — customers will do that quickly enough — but to inform them how produce is grown, methods used, how quickly it will be on the table, etc. They will need to look at what they have been doing and concentrate on what will be needed. Griffin says more greenhouses will be coming with controlled environment and uniform growing practices unaffected by weather.
Karl Kolb, High Sierra Group, project manager for Ohio Produce Marketing Agreement (OPMA), discussed the recently passed Food Safety Modernization Act (FSMA). He said that regulations applying to Ohio growers meet all criteria of FSMA, with OPMA now given authority by action of the Ohio General Assembly. Their operating board consists of 16 farmer grower members, with an overall Board of Directors of five growers, with no regulatory authority. Those signing up for OPMA can be assured they meet inspection standards enforced for wholesale suppliers to chain store supermarkets, plus other suppliers. Kolb says Ohio is becoming a leader in establishing such standards for smaller acreage producers in the Midwest. The $500,000 exemption in FSMA is a result of these efforts. Ohio now has the nation’s first and only fruit and vegetable program leading to certification.
Kolb says OPMA gives power to Midwest growers who have long claimed a balanced playing field was needed, is a barrier against large corporations in the food industry who determine what we eat, and helps return control to smaller growers. Certification gives assurance that food safety is enhanced, provides top defense from recalls, which can happen to anybody anytime. OPMA certification has state of Ohio backing and is endorsed by major chains such as Walmart and Krogers. OPMA has total respect for organic, their rules are recognized and applied, under USDA authorized programs. An organic farmer is on the review board, and several of the 16 member operating board are in this category. Four boards administer the program: advisory, compliance, technical (including OSU/OARDC representatives), plus the operating board. Indications are that most produce growers will sign up for OPMA as the FSMA legislation goes into effect.