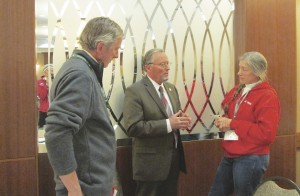 by Pat Malin
LIVERPOOL, NY — In 2015, New York wine and beverage connoisseurs might have been delighted to find a bottle of vintage wine or a special growler of craft beer under their real balsam Christmas tree.
It sounds like a novel gift idea, but it could become more common thanks to the efforts of New York State government, New York State Agriculture and Markets and commissioner Richard Ball.
Ball addressed the Christmas Tree Farmers Association of New York (CTFANY) at its 2016 winter convention on Jan. 22 at the Holiday Inn and alluded to the success of two new marketing campaigns late last year that linked unique agricultural businesses with each other: NY Wine & Trees in the Hudson Valley, followed by Hoppy Holidays in the Finger Lakes, in which 13 Christmas tree farmers teamed up with 14 local breweries.
Consumers who visited the farms and who made a purchase were given free commemorative gifts and encouraged to visit the breweries and vice-versa. The campaign was marketed on two local radio stations and via a website: www.hoppyholidays.org .
He also cited the now-familiar Trees for Troops program that sent more than 17,000 New York-grown Christmas trees to American troops and their families serving on 62 military bases in the U.S. and Middle East.
In addition, CTFANY joined GrowNYC on a pilot project last year to make farm-fresh trees and wreaths available in four GreenMarkets in metropolitan New York, including Manhattan and Queens and two in Brooklyn, on weekends.
Ball said he visited New York City during the holidays to evaluate several programs that brought produce and other agricultural products from upstate to the masses downstate.
“Last year when I was (at the CTFANY meeting), we had discussions about the Governor’s upstate-downstate summit. The Governor (Andrew Cuomo) likes to hold summits. We did that in an effort to identify the needs of our farmers… I think we’re making good progress,” he said.
Tree farmer Susan Hurd and her son, Charles, of Hurd’s Family Farm in Modena, NY participated in the GreenMarkets on the four Saturdays following Thanksgiving.
“We started out taking 50 trees and 35 wreaths to two markets in Brooklyn,” Susan Hurd said. “This was our first year in the pilot program and we were delighted to be part of it. I’d say we had mixed success. We had to rent a truck, so there was the added cost of transport and fuel.”
CTFANY President Faye Beckwith believes Commissioner Ball is doing a good job representing the farmers’ interests at the state level.
“Agriculture is our biggest industry in New York,” she said. “Maybe we’re becoming more proactive. The Christmas tree industry in New York is the fourth largest in the U.S. We now have 875 tree farms.”
Thanks to new marketing initiatives, such as Wine & Trees, CTFANY’s membership is bouncing back after a few quiet years, Beckwith pointed out.
Ball went on to say that Gov. Cuomo kicked in additional funds for the Pride of New York marketing program. “It’s environmentally correct, it’s for New York. We’re in a good place, but now we have to take it to the next level.”
Ball spent time with the Governor last summer discussing farmers’ concerns about issues such as hiring and training laborers, job training in schools, and how to bring nutritious, farm-fresh produce into local schools.
He said the state wants to create additional pathways to connect farmers with consumers and “make eye contact” at such places as county fairs and state fairs. Gov. Cuomo, he noted, proposed adding $50 million to the state budget just for the Great New York State Fair.
“We get a million people a year at the state fair, but 99 percent of the visitors are not farmers,” Ball told the tree farmers. “You need to get out and tell them your story… It’s an old market (Christmas trees). It went away for awhile, but now it’s coming back.”
Jerrianne Scheiderich, who has a tree farm in Springwater, NY, expressed concerns about jobs for youths on the farm when she spoke to the commissioner following his address at the Holiday Inn.
“The reality is, our profits are so dependent on other factors not under our control… I don’t have enough work to hire a fulltime person. Our jobs fit the bill for young people and it’s part of their learning experience. I don’t want to be forced to employ migrant labor just because it’s available and I can’t hire retired people.”
She said she’s been providing jobs for high school kids since 1972 and farms should not be expected to give youths a $15 an hour minimum wage or the equivalent of what they would earn at McDonald’s.