Michigan family learns as they grow 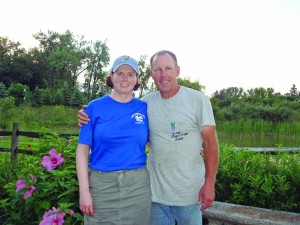 by Sally Colby
In 1996, Sharon and Joe Jones purchased a 37-acre property in Bridgman, MI that included seven acres of blueberries. The blueberries were being managed, harvested and sold through a co-op, but Joe wanted to get involved with growing. With the help of some area blueberry growers, the Joneses continued cultivating and selling blueberries.
To expand their knowledge, the Joneses attended Michigan State Extension blueberry school, where they learned about pest management, varieties and pruning. Although they’re now experienced growers, they take advantage of opportunities for ongoing education. “Every year, the Michigan Blueberry Growers (MBG) holds an all-day grower certification event,” said Sharon. “They review IPM, and a lot of the classes involve food safety. We have a food safety audit through the MBG every year.”

After several years of growing blueberries commercially, the Joneses had an opportunity to purchase a U-pick blueberry field from neighbor Bill Schmidt, an established blueberry farmer, when he retired from growing in 2000. “That’s when we really got into business,” said Sharon. “It’s 10 acres of blueberries, so now we have 17 acres altogether.”
The Joneses purchased the Schmidt property in March, which left little time for them to learn how to operate a U-pick. “It would have been nice to shadow Bill for a season,” she said. “But the Schmidts were very helpful. We bought their cleaning line and harvester. We also continued the relationships with the companies they were getting jams and honeys from.”
When the Schmidts operated their U-pick, customers picked up a bucket at the Schmidts’ house, picked blueberries, then had their berries weighed. Since the Joneses don’t live on that property, they opened a stand to accommodate customers. “He had a storage shed in the middle of the field where he had handed out buckets, but it was boarded up,” said Sharon. “We poured a concrete patio there, set out tables and an awning for a picnic site.” About a year after that construction, the shed burned to the ground. Joe, his son Canaan and Joe’s brothers rebuilt the shed in time to open for that season.
The Joneses grow several different types of blueberries that ripen throughout the season. “Blue Crop is our earliest variety,” said Sharon. “It’s usually ready the weekend after July 4. Blue Ray is ripe at about the same time. Rubel, which is smaller and sweeter, is great for baking. We also have Blue Crop and Jerseys. The Jerseys are ready the third or fourth week in July and continue to the end of the season in mid-August.” Sharon noted that most people who come for U-pick are fans of either the Jersey or Blue Crop, while those who come in to purchase ready-picked usually don’t realize there are different varieties.
Sharon says that Blue Crop is especially nice for customers who prefer ready-picked berries. “We’ll machine harvest those on Friday night and sell them at the U-pick field on Saturday morning,” said Sharon, adding that most of the machine-harvested berries go to MBG. “We keep the berries in a cooler overnight and they’re fresh at the field the next day.”
When one section of a field wasn’t yielding a sufficient volume of fruit, the Joneses removed that section and planted new bushes. “We tore it out in fall of 2012, and in the spring of 2013, we planted 4,000 new bushes on about four acres,” said Sharon. “About 3,000 plants are Blue Crop and 1,000 are Draper, a new variety.” Draper was developed at Michigan State University in 2005, and can be machine-harvested and stored for long periods of time.
In addition to being able to market large quantities of blueberries through the MBG, the Joneses find the organization is valuable for all aspects of blueberry management. “They are an excellent resource for IPM, and provide a manual on pest management,” said Sharon. “They place traps on the farm and a scout comes out to check for insects.”